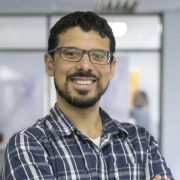 “I want 40,000 hectares of forest to be restored in Paraíba Valley,” said Patrick Assumpção, a farmer, tree grower and agroforester from Brazil.

He is doing his part, working with the local community to plant native trees on degraded land in order to grow high-quality food and build a strong rural economy. “I want to spread what we’re doing here, introduce new plants and fruits to farmers and consumers. If I can eat well, I’d like others to as well.” 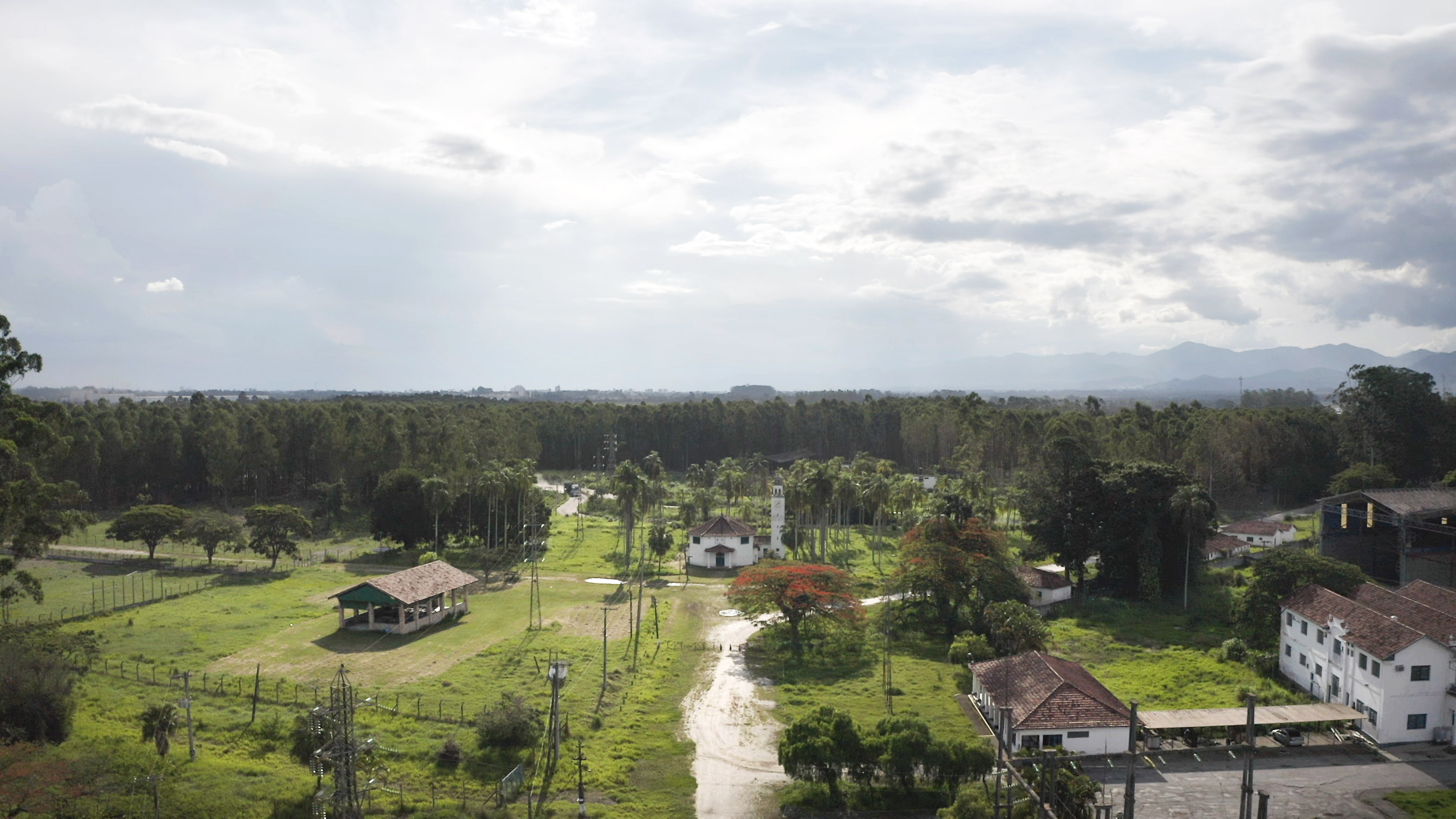 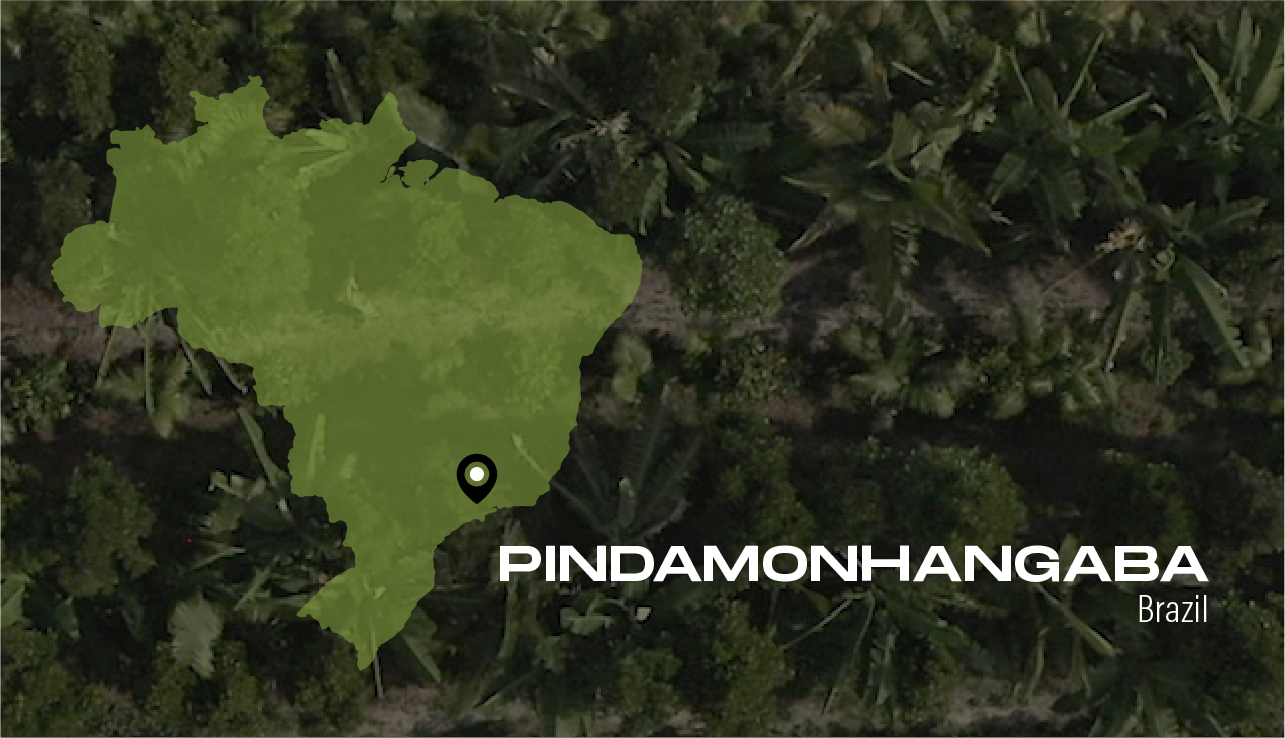 Patrick is at the helm of Fazenda Nova Coruputuba, a farm of about 200 hectares in Pindamonhangaba, São Paulo. Established by his great grandfather, Cícero da Silva Prado, in 1911, the property breathes history. At its peak, some 5,000 people lived and worked on the farm, growing coffee, rice and later, eucalyptus. Silva Prado was a visionary: He created a way to transform waste materials from rice into paper, establishing what became Latin America’s largest paper factory. The farm and nearby town were so lively that filmmaker Amácio Mazzaropi set his 1959 film Jeca Tatu there.

But few signs of the farm’s golden age remain today. In the 1970s, economic crises, management failures and legal disputes bankrupted the farm. The family sold off large portions of the property, only maintaining a small parcel for rice, eucalyptus and other crops. A pulp company bought the paper plant and then left the region. The town slowly emptied out. Buildings that once served as schools, cinemas, homes and stores now lie in ruins. 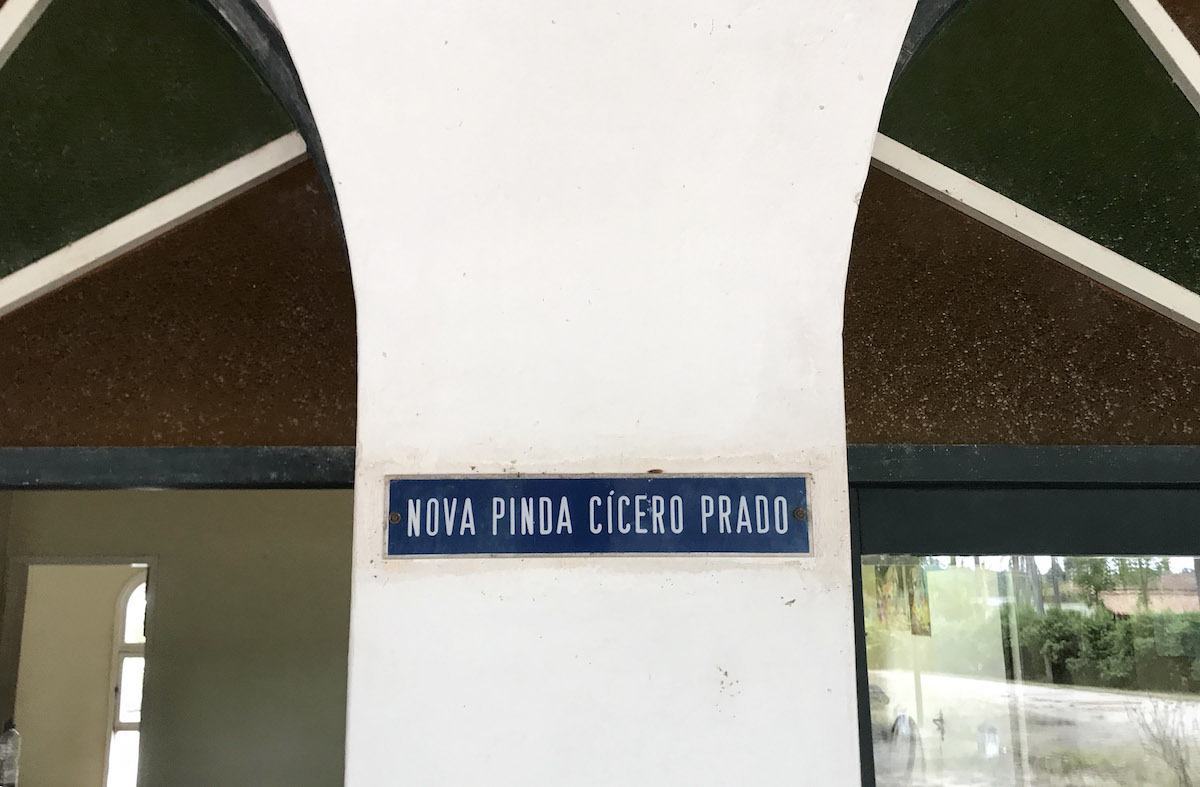 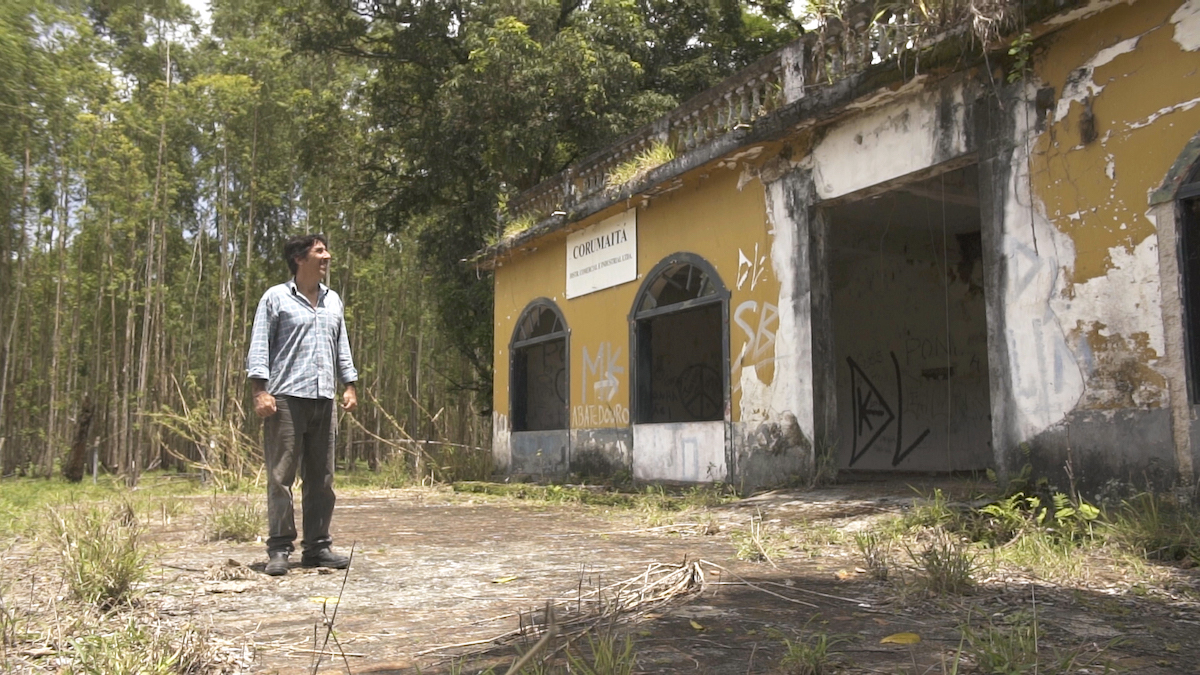 Patrick visits empty buildings in the town, where more than 5,000 people once lived. (Photo: Asteroide)

The history of the farm parallels that of the Paraíba Valley, located between two mountain ranges and close to São Paulo and Rio de Janeiro. The region was once the driving force of Brazil’s economy. In the 19th century, it was one of Brazil’s leading coffee regions; in the 20th century, it was the country’s third-largest dairy producer.

But even with all that economic prosperity, no one invested in improving the soil. Centuries of unsustainable agriculture and livestock farming drained the soil of its nutrients, degrading thousands of hectares of land. Erosion has silted up the rivers and stopped up the freshwater springs that supply water to more than 2 million people.

The good news is that the degradation can be reversed. Restorative agriculture, like that which Patrick is pursuing, can restore the productivity and functionality of the land. If the idea spreads, the Paraíba Valley may recover its former glory and transform into a major hub for agroforestry.

Images from a drone flight in the Paraíba Valley. The valley could be turned into a restoration hub. (Video: Asteroide)

When a “Madman” Grows Native Trees for Timber

Patrick has always planted trees. He earned a degree in industrial design in 1997, but returned to the Paraíba Valley as soon as he finished university. His goal was to restore the family farm. 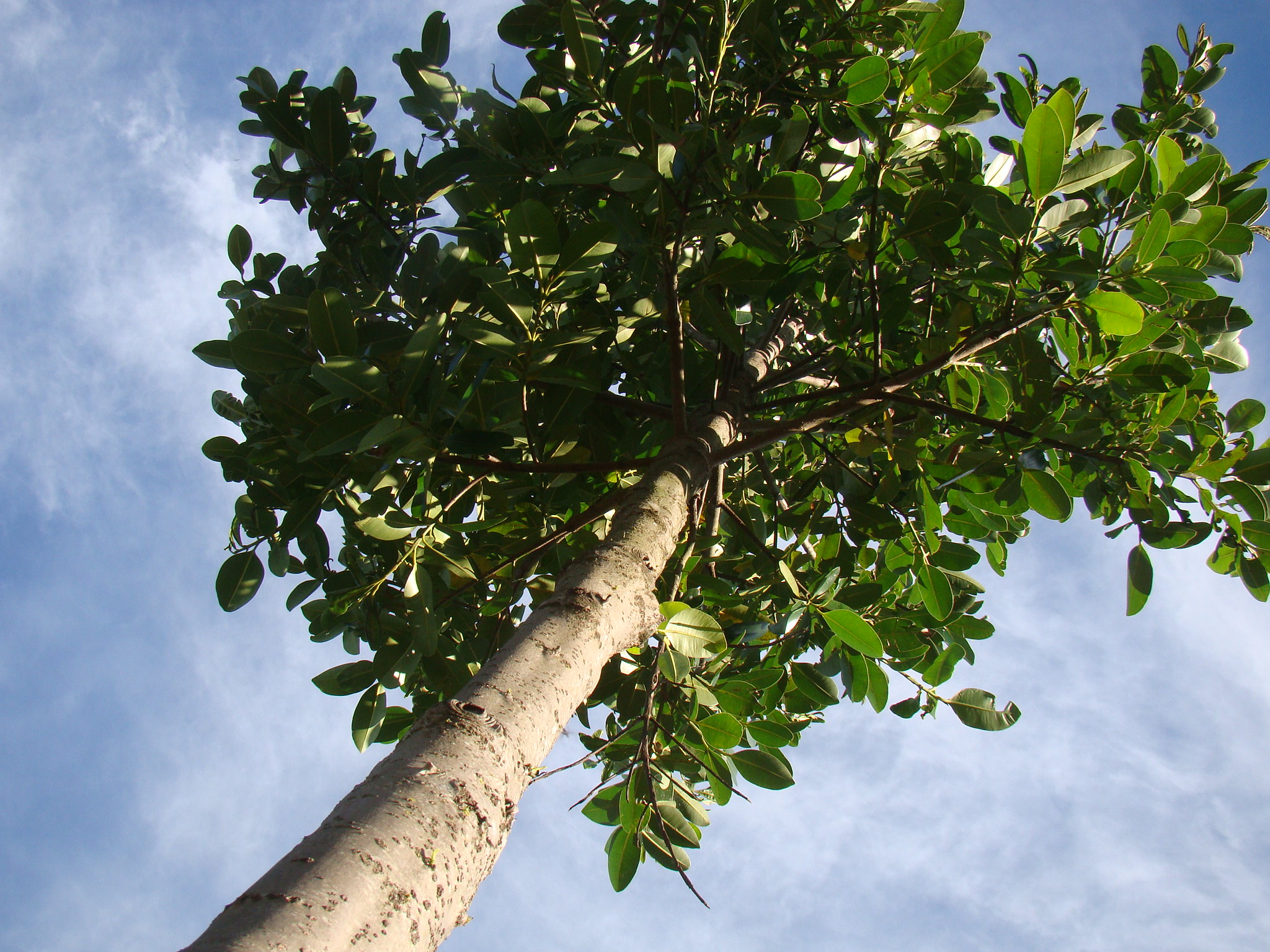 He began by planting non-native eucalyptus trees. After quickly realizing that the market for eucalyptus wood was saturated, he decided to diversify. He bet on guanandi, a hardwood species native to Brazil.

It was an unusual choice: Very few hardwood producers grew native trees back then. Even today, the Brazilian wood market is dominated by non-native, exotic species like pine and eucalyptus, where markets, productivity and returns are more predictable.

His guanandi plantation caught the attention of the São Paulo Agribusiness Technology Agency (APTA). “An APTA researcher visited the farm to meet the madman planting native trees,” Patrick said. “When he arrived, he asked me if I’d heard about agroforestry. I never had.”

After the visit, Patrick did some experiments and concluded that growing trees on his farm together with a variety of food crops and native plants — a system known as agroforestry — made a lot of sense. 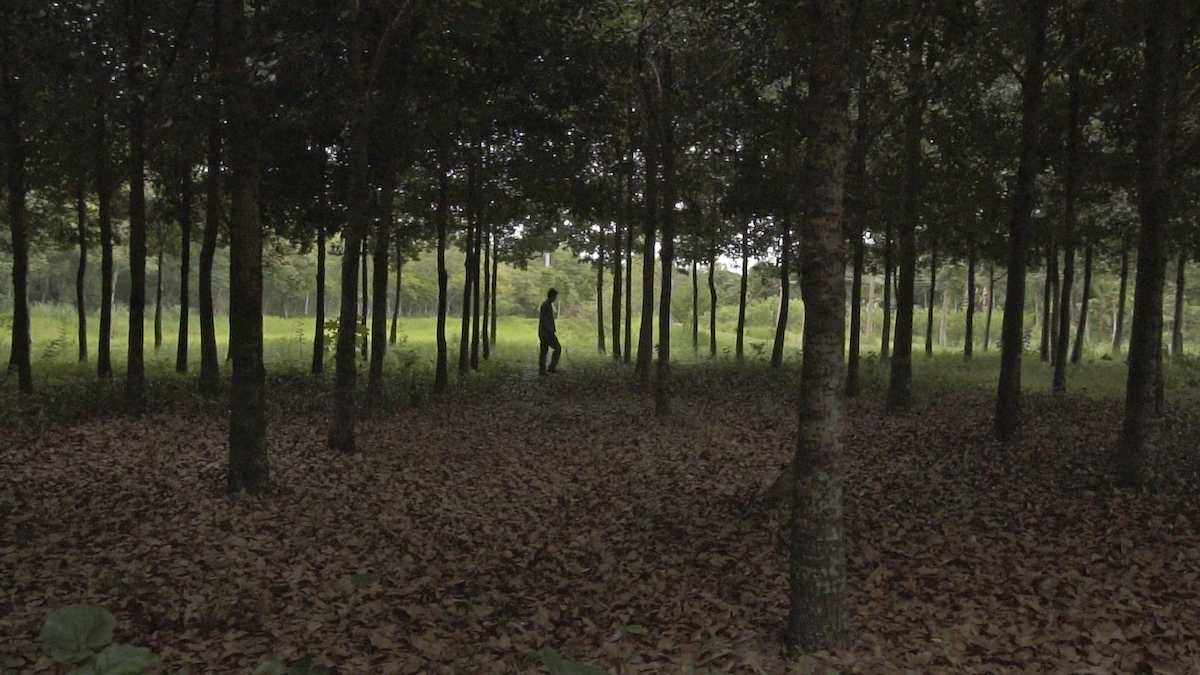 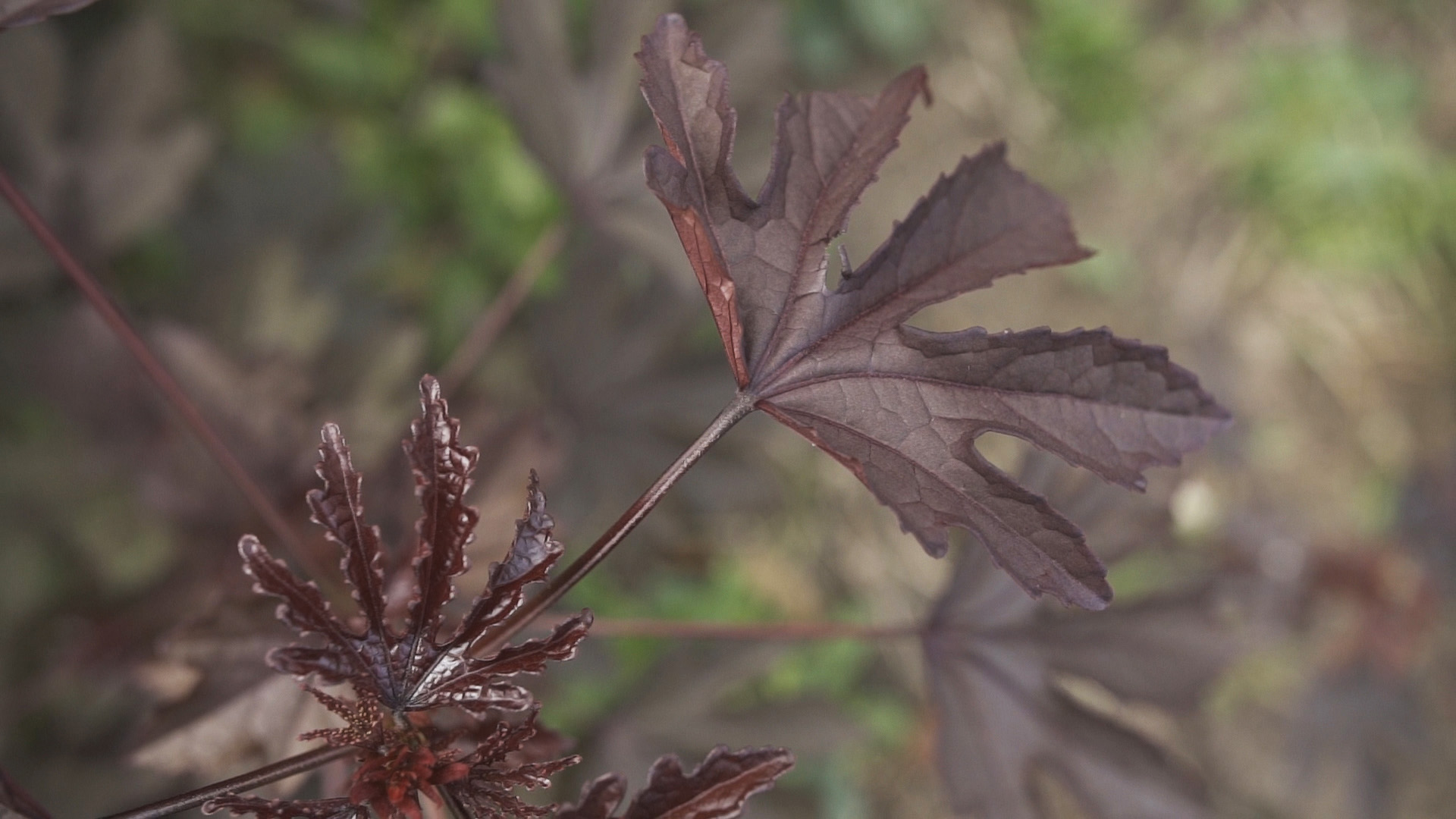 PANC is an acronym in Brazilian Portuguese meaning unconventional food plant. These species can be eaten, but they are not generally commercialized or found in markets. They tend to grow on their own and have important local and cultural uses, such as ingredients in traditional dishes, nutritional supplements and medicinal purposes. Among the best known are ora-pro-nobis, dandelion and hibiscus.

An agroforestry system combines trees with crops in a model in which each plant species is selected for a specific purpose. Some species are chosen to produce organic matter and improve soil fertility and health. Other, faster-growing species are harvested, providing farmers with income in the short term. Slow-growing species, like hardwood trees, generate income in the long term. They form a type of pension or savings plan for the farmer’s future. Instead of earning income from one crop, farmers reap the earnings of several different species harvested on different timelines. Trees also play a key role in increasing the resilience of the production system against extreme events caused by climate change.

Patrick has tested a series of these models on his farm. He has tried agroforestry systems that combine native trees with legumes, such as beans and peas. He has combined wood, legumes and fruits. He has combined species that have cultural and traditional value, such as unconventional food plants, known by the Portuguese acronym PANCs (plantas alimentícias não convencionais). Some models have been successful; others have not. But combining experimentation and the natural curiosity of farmers with scientific knowledge has borne fruit and yielded important lessons.

The biggest lesson Patrick learned is one that seems obvious: Brazil is tropical, so many European practices don’t apply. Treating the soil based on Western concepts causes it to lose its fertility.

Patrick’s rice fields, which had been cultivated for 70 years, had lost much of their soil and were completely silted. Soil loss, erosion and degradation were also common throughout the property.

Transforming the Valley through Forest and Landscape Restoration

Agroforestry with native species can not only give farmers more to sell, but can transform the degraded land of the Paraíba Valley and recover the environmental services it provides. Indeed, a 2018 study by the Department for the Environment of the State of São Paulo (conducted with the support of WRI Brasil and other partners) found that the region is perfectly suited for this type of investment. 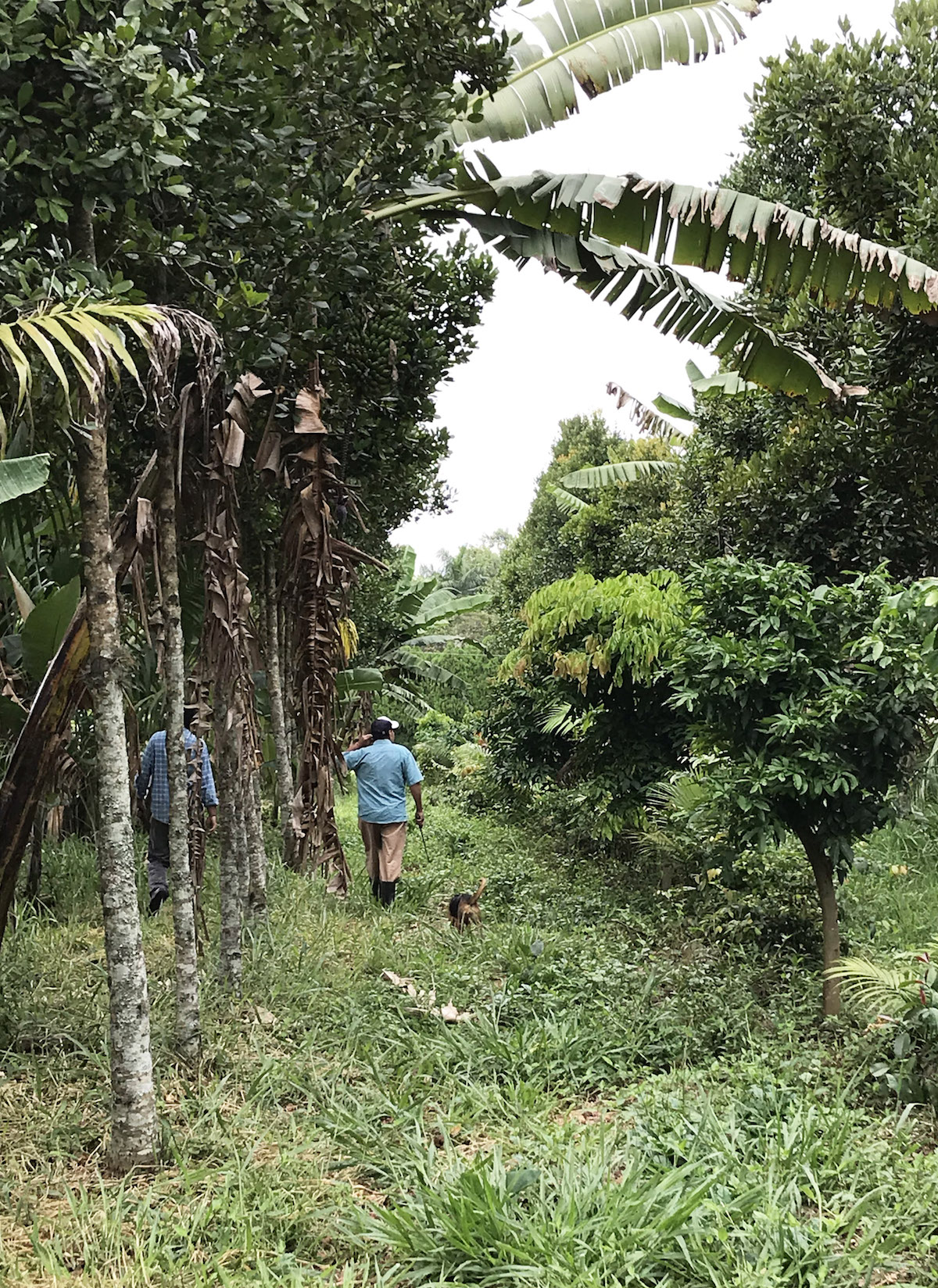 Why forest and landscape restoration for the Paraíba Valley?

Farmers from the valley choose to grow trees for the following benefits: 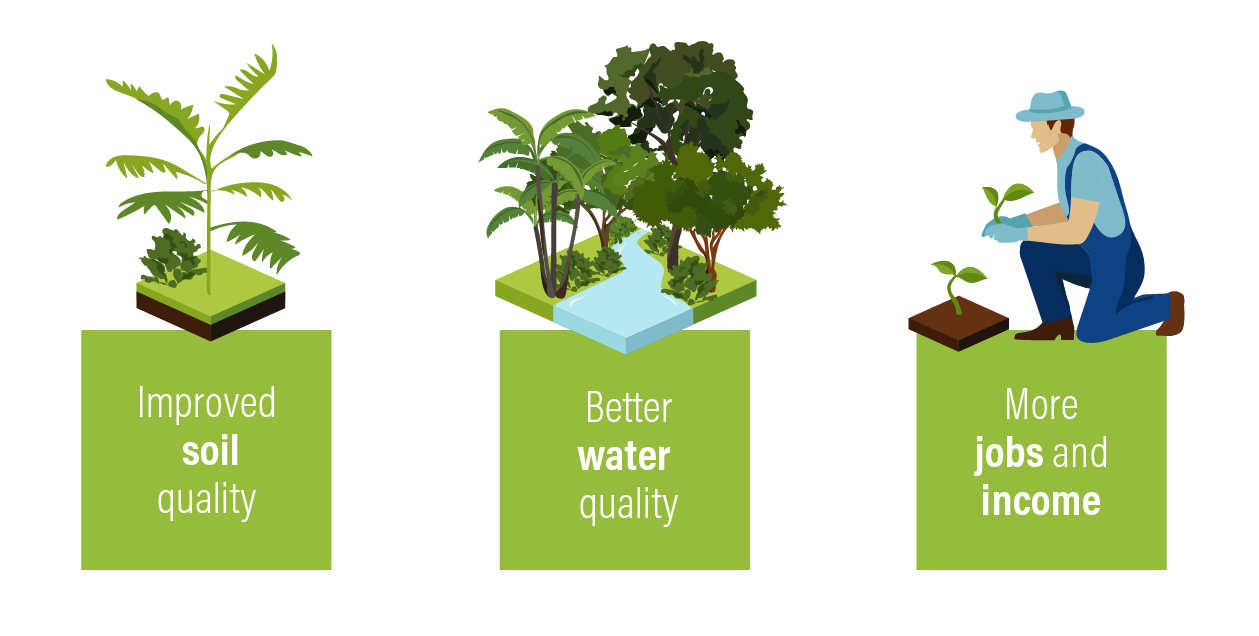 The study applied the Restoration Opportunities Assessment Methodology (ROAM) within the region. Developed by WRI and the International Union for Conservation of Nature (IUCN), ROAM helps identify which areas in a landscape could benefit from forest and landscape restoration interventions. It also provides evidence to farmers and other players that growing trees can pay off.

Researchers produced a map showing where restoring the land would produce the most economic, environmental and social benefits. It was this map that made Patrick realize it might be possible to restore at least 40,000 hectares of degraded land in the Paraíba Valley.

According to the study, if all of the identified areas were restored, agriculture and livestock‘s share of the Paraíba Valley’s GDP could increase by 32%. Restoration could also reduce soil erosion by 19%, which would improve water quality by reducing the amount of sediment that flows into rivers.

If the models and opportunities for income already exist, what is preventing Paraíba Valley from becoming a major hub for agroforestry with native species?

While strolling through the guanandi plantation and the different agroforestry crops, Patrick jokes: “What has kept me busy over the past five years hasn’t been growing trees, but creating markets for these products.”

Fazenda Nova Coruputuba now grows a wide range of crops. It raises bananas that are genetically enhanced to contain higher levels of potassium. It harvests cassava, pigeon peas and other legumes; squash, corms (a potato-like tuber) and purple corn; and a variety of native fruit species, including jabuticaba, uvaia, grumichama, bacupari, cambuca and cambuci. It produces nutritious leafy greens and unconventional food plants, such as Barbados gooseberry and hearts of palm from the peach and Bangalow palm. It grows hardwoods, including the native guanandi and the exotic acacia. 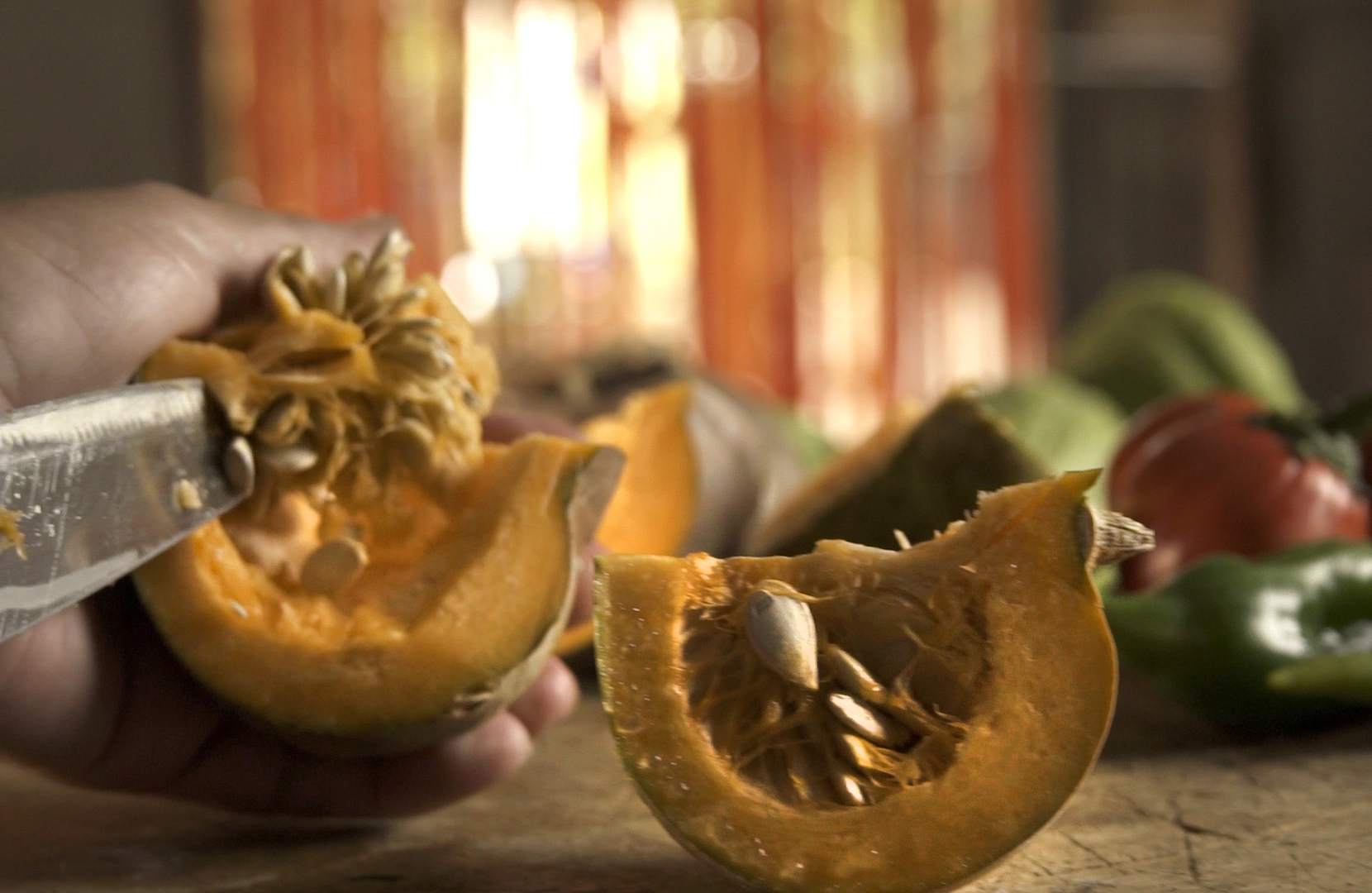 Forest and landscape restoration will only catch on if it has the support of local farmers — and that support will come only if they can make money selling their products. “We need to guarantee a market where smallholders can sell nutritious products that are planted in a way that helps recover the soil and restore forests, and which make sense to consumers,” said Patrick. “We need to show the added value of organic and sustainable products.”

To help educate consumers, Patrick is working alongside renowned Brazilian chefs — including local stars like Alex Atala — selling his agroforestry produce to 11 restaurants in São Paulo.

Another way to make agroforestry products marketable is to process them. Some of Brazil’s native fruits are hard to sell in their natural form because they are often highly perishable. But many can be frozen and transformed into pulp, yogurt, ice cream and beverages. Others can be sold dried or in powdered form. Patrick is turning his cambuci fruits into beverages, among other native tree-derived products.

The market for guanandi wood can also expand. “We invited several architects and designers here to the farm,” Patrick said. “They had no idea someone was planting hardwoods close to São Paulo. They thought all the timber was extracted from the Amazon.” These professionals are interested in sustainably sourced materials. Using hardwoods originating from reforested native species allows them to offer good-quality products that put no pressure on natural forests. 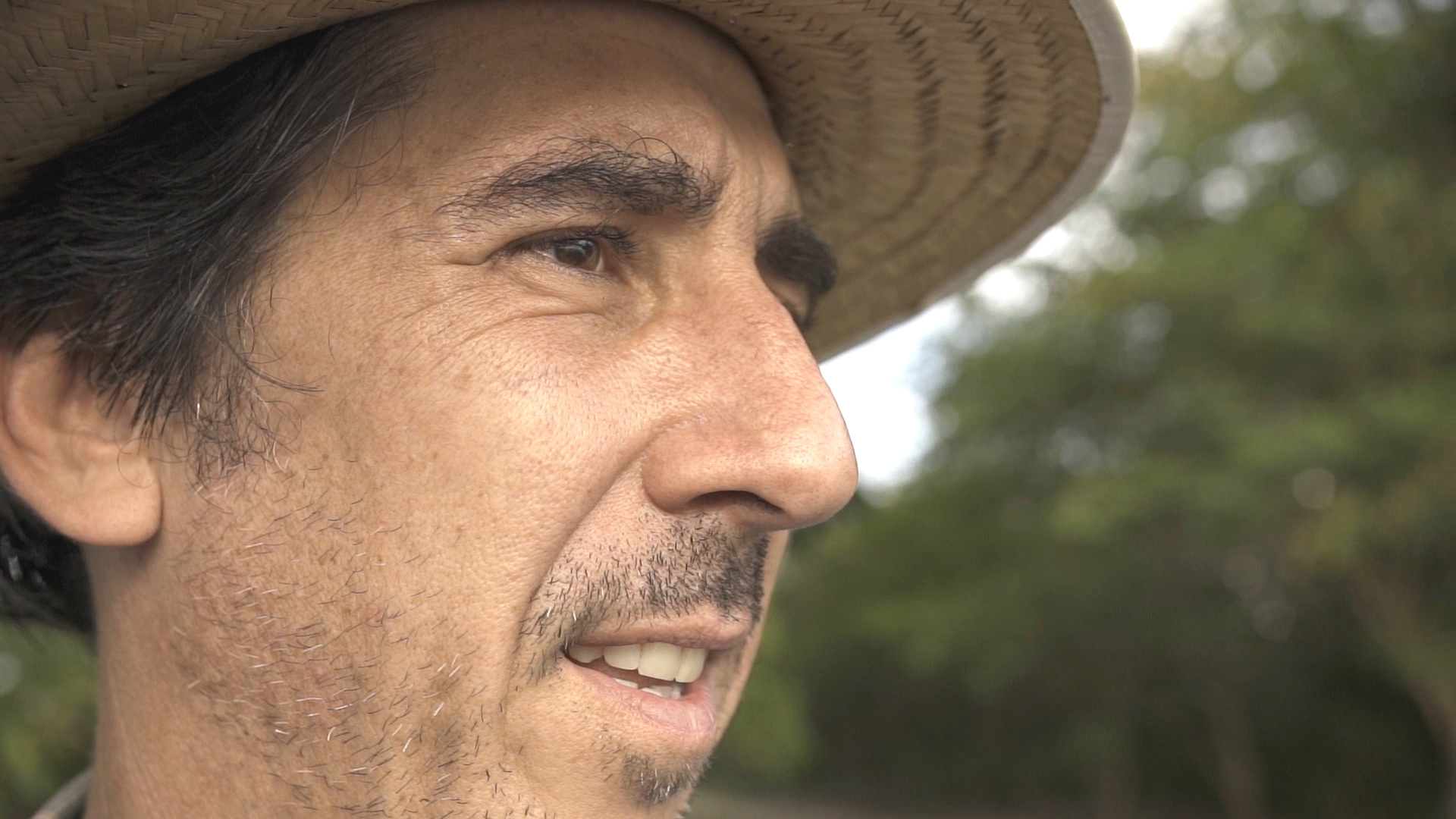 We need to guarantee a market where smallholders can sell nutritious products that are planted in a way that helps recover the soil and restore forests, and which make sense to consumers.

Educating Farmers About the Benefits of Agroforestry

Organizations are now working to convince more farmers in the Paraíba Valley to adopt agroforestry and low-carbon agricultural practices like Patrick’s. The Vale do Paraíba Agroforestry Network aims to expand agroforestry models. It relies on the support of WRI Brasil’s Pro-Restaura Project and several other partners, like the pan-Latin American Initiative 20x20 network, to develop incentives and solutions that will scale up forest and landscape restoration throughout the region.

One of their goals is to create a Paraíba Valley Forestry Hub. The idea, which is still at the pilot stage, is to help smallholders and strengthen the supply chains for forest-based products like native hardwoods, fruits and seeds. If implemented, the hub could help farmers grow 10,000 hectares of multifunctional forests and agroforestry systems that maintain environmental services while generating income for farmers and entrepreneurs. The hope is that it would help build new markets and create new forests in the coming years.

By growing nutritious plants, harvesting sustainable and good-quality hardwoods, and recovering soil and water sources, Patrick and other farmers are working to establish a new golden age in the Paraíba Valley. They are pioneering an approach for the 21st century, building stronger rural communities, helping farmers mitigate and adapt to climate change, and producing healthy, sustainable foods.

For them, agroforestry is the future.