From Banker to “Tree Whisperer”

FROM BANKER TO “TREE WHISPERER”

“There was not a single tree around here. Everything you’re looking at was planted,” said Bruno Mariani as he strolled through a forest filled with jacaranda, jequitibá, Spanish cedar and brazilwood, the now endangered tree after which Brazil is named. Surrounded by valuable species from the Atlantic Forest, he spoke proudly of the work he’s done.

A little over a decade ago, what is now a flourishing forest was a degraded cattle pasture without a single tree standing, a landscape common in Brazil’s Atlantic Forest biome. Today, Bruno’s farm is dotted with forestry experiments, reforestation projects and genetic reserves of species near extinction.

“The first 500 years in Brazil were dedicated to destroying the Atlantic Forest,” explained Bruno. The deforestation began just outside of Trancoso, a district in the municipality of Porto Seguro, in coastal Bahia state. It was in this region that the first Europeans landed in Brazil in 1500, and where the predatory exploitation of nature began. “But here is the cradle of restoration, too,” he said. 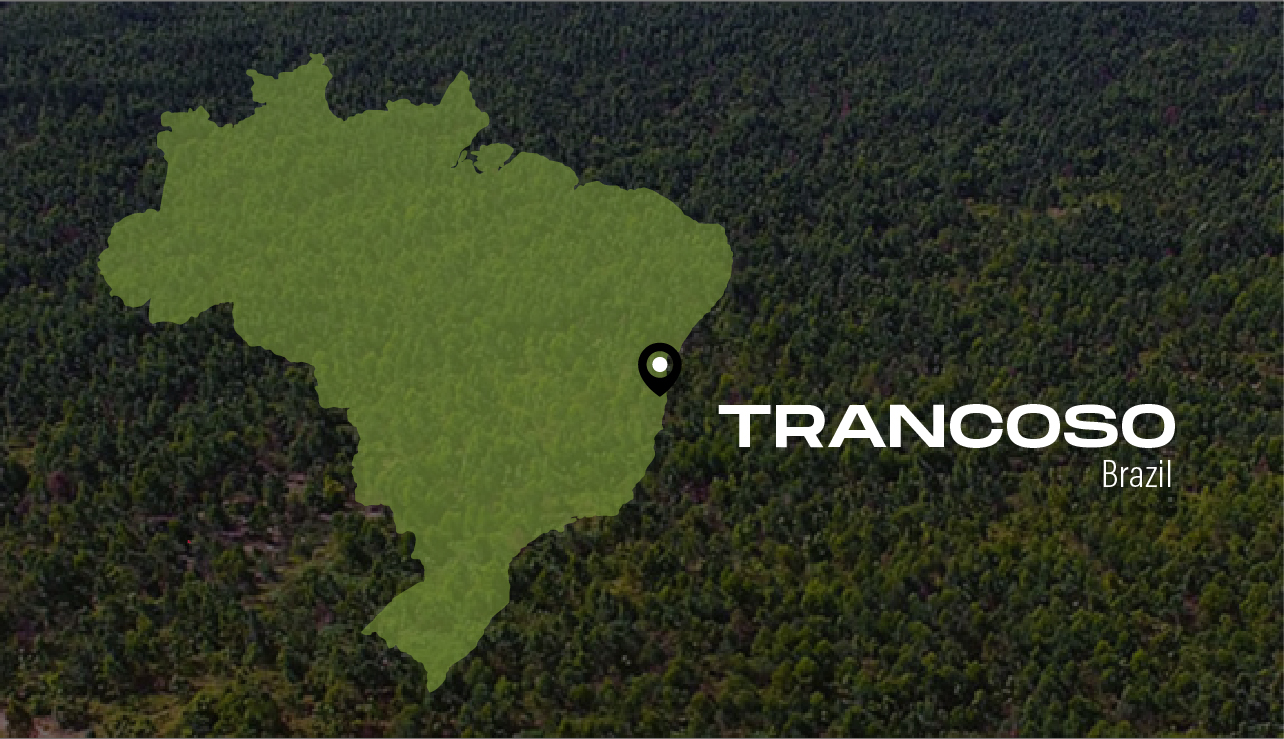 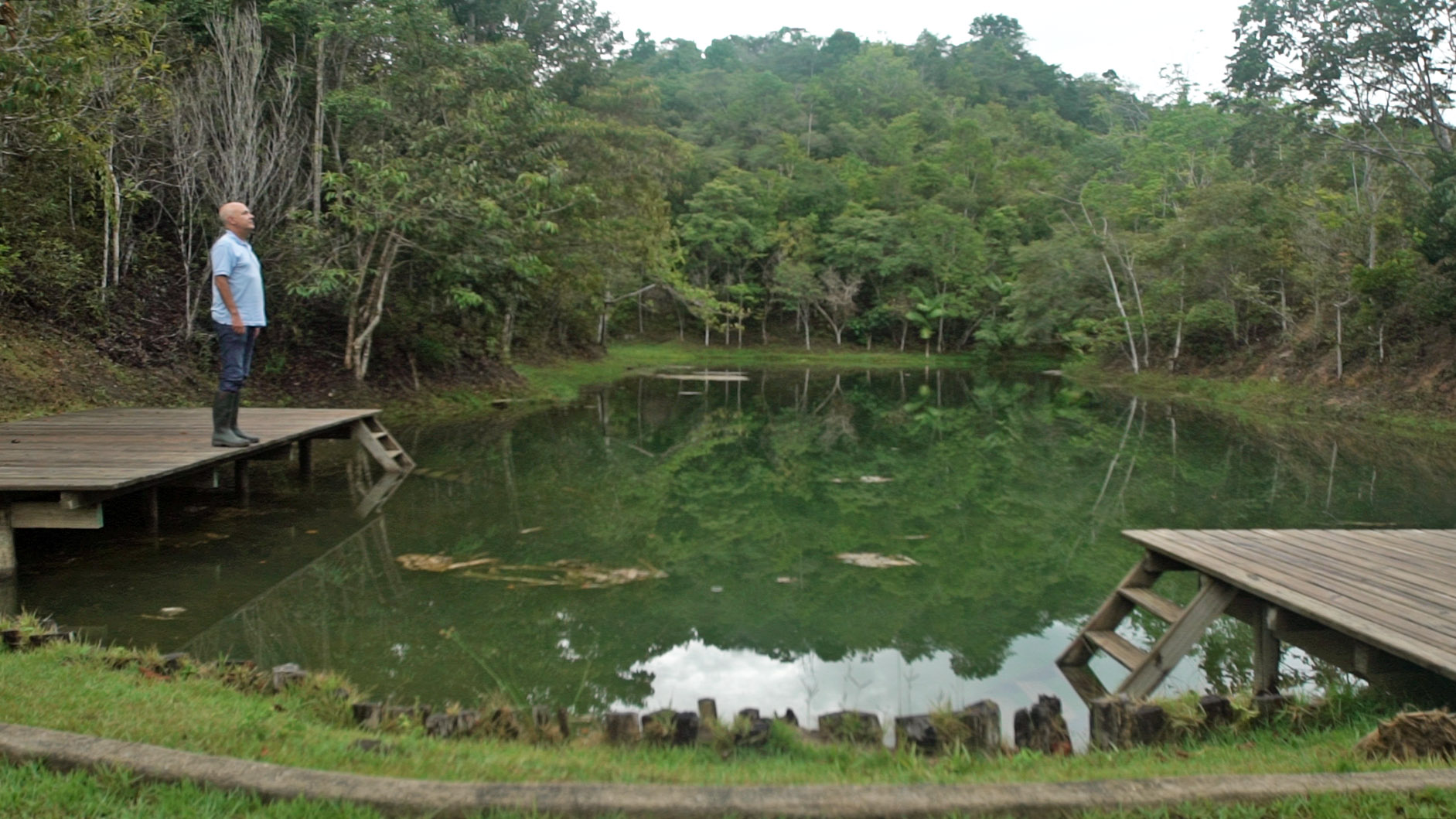 Bruno is the CEO and founder of Symbiosis Investimentos, a company that reforests degraded pastureland to sustainably produce high-quality hardwoods. Unlike most plantation forests, which grow exotic species, Bruno plants species native to Brazil’s tropical Atlantic Forest, helping to conserve endangered trees while supporting biodiversity and improving soil and water. The company, a partner of Latin American restoration alliance Initiative 20x20, takes a scientific and innovative approach to help trees grow faster and more consistently while working in harmony with nature.

The company has the capacity to produce 500,000 native tree seedlings a year. It has already planted more than 2,200 acres (900 hectares). Bruno hopes he can begin harvesting as early as this year, selectively removing certain trees at a time and always keeping the land protected by trees. By conserving 40% of the land and putting 60% under production, the company can obtain a return on investment, create much-needed jobs, protect biodiversity and restore Brazil’s highly fragmented Atlantic Forest.

And in the process, Bruno is pioneering a business model that could be replicated across Brazil’s more than 65 million hectares of degraded land. 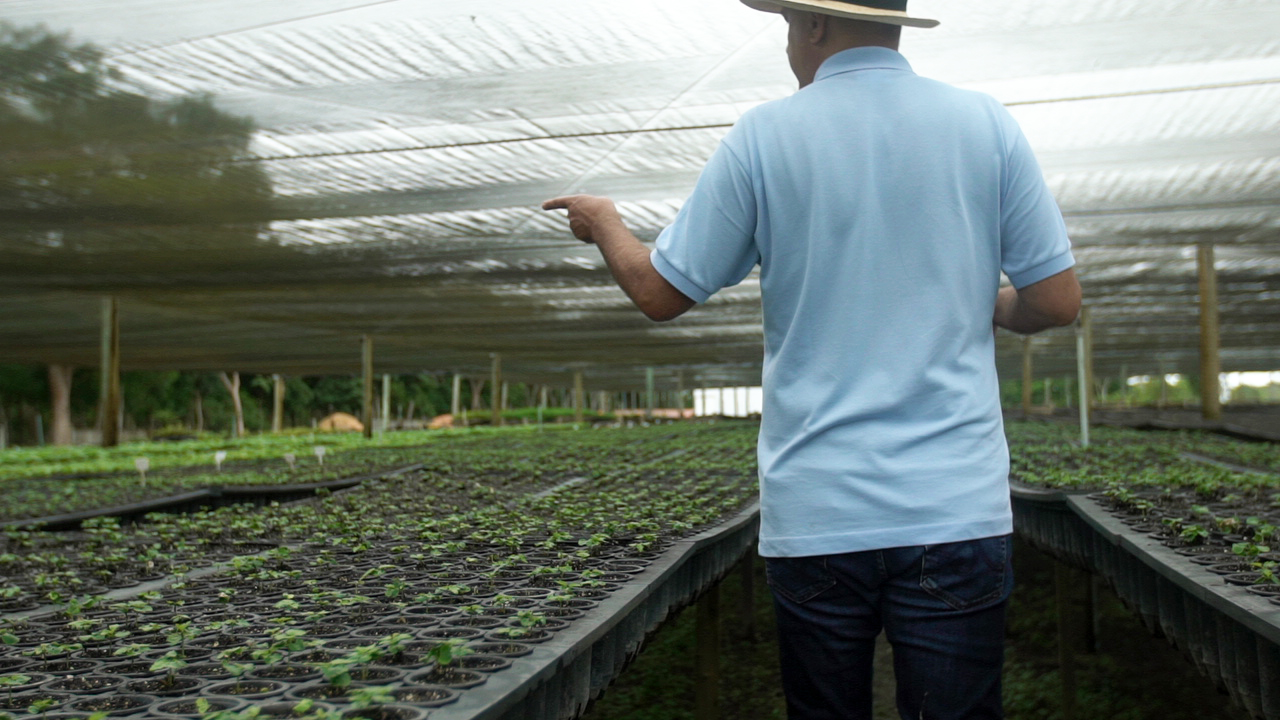 The company has the capacity to produce 500,000 native tree seedlings a year. (Photo: Asteroide)

From Banking to Silviculture with Native Species

Bruno speaks slowly, with the calmness of someone whose office looks out on the forest he helped plant and nurture. He wears a polo shirt, a pair of denim jeans and boots — versatile clothing suited to both the office and the field. His office is built from reforested wood. On one side, it offers a view of the seedling nursery, where production begins. On the other side, a recovering forest grows. 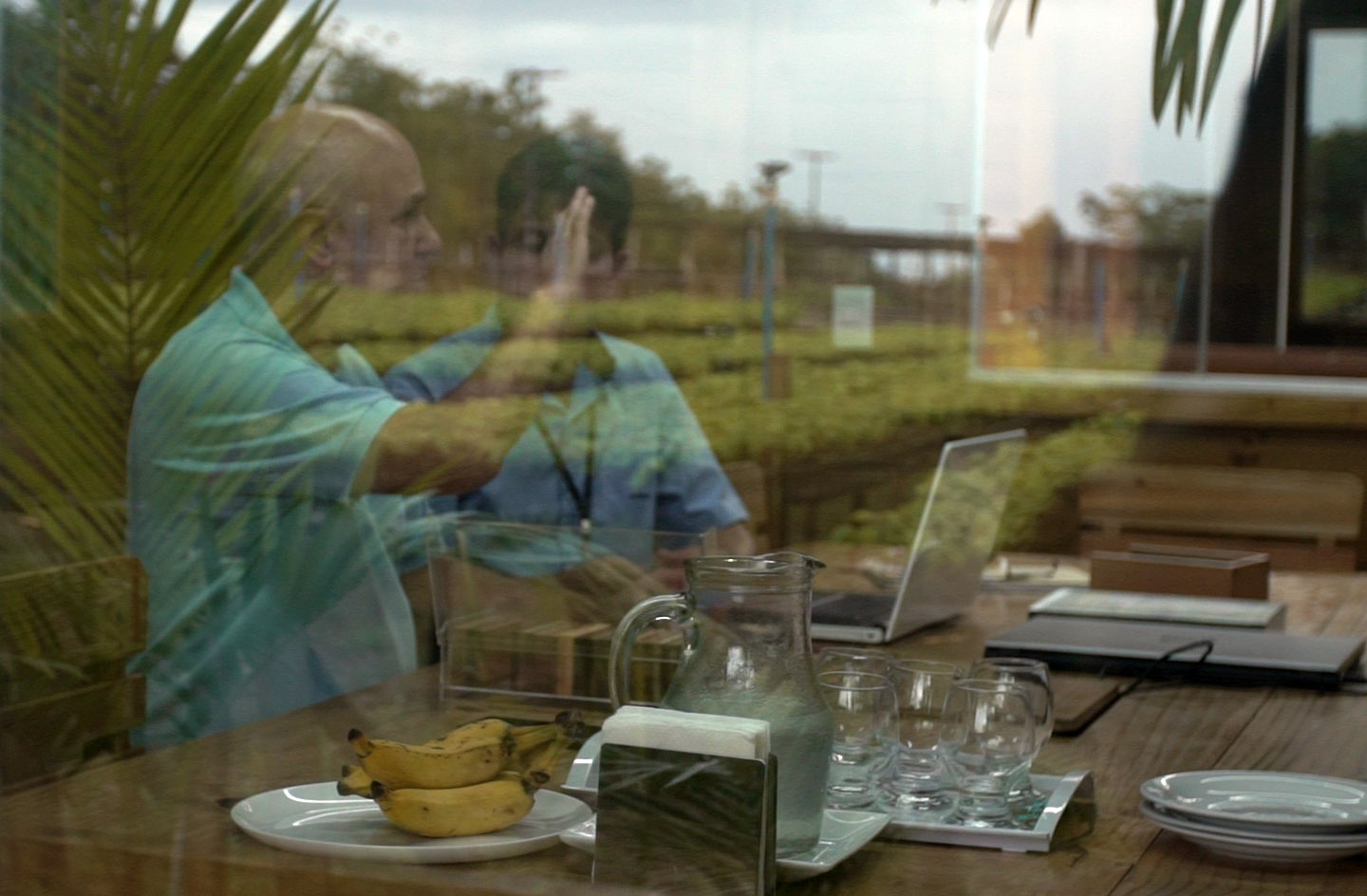 Bruno’s office looks out on a rich forest. (Photo: Asteroide)

It’s a vastly different landscape from the one he used to look out on when he worked in the financial sector. Bruno managed millions of dollars of financial assets in his former career. “There came a point where I simply said, ‘Enough,’” he recalled. “I couldn’t take working in a bank anymore. That’s when I discovered my passion for forests.”

A series of newspaper articles on the environment triggered his realization. Motivated by the desire to change his own life and contribute to environmental health, Bruno began studying sustainable investing. Three years after first reading the newspaper series, he founded Symbiosis.

Bruno’s research formed the backbone of the model he developed for growing and cultivating Brazil’s native tree species. “Anyone can plant a tree,” he said. “You just have to buy the seeds and plant them. But not everyone can grow a forest.”

Bruno uses a practice known as “silviculture,” a scientific approach similar to that employed by commercial agriculture, but for far more ecologically sustainable goals. It’s earned him the reputation as a “tree whisperer.” 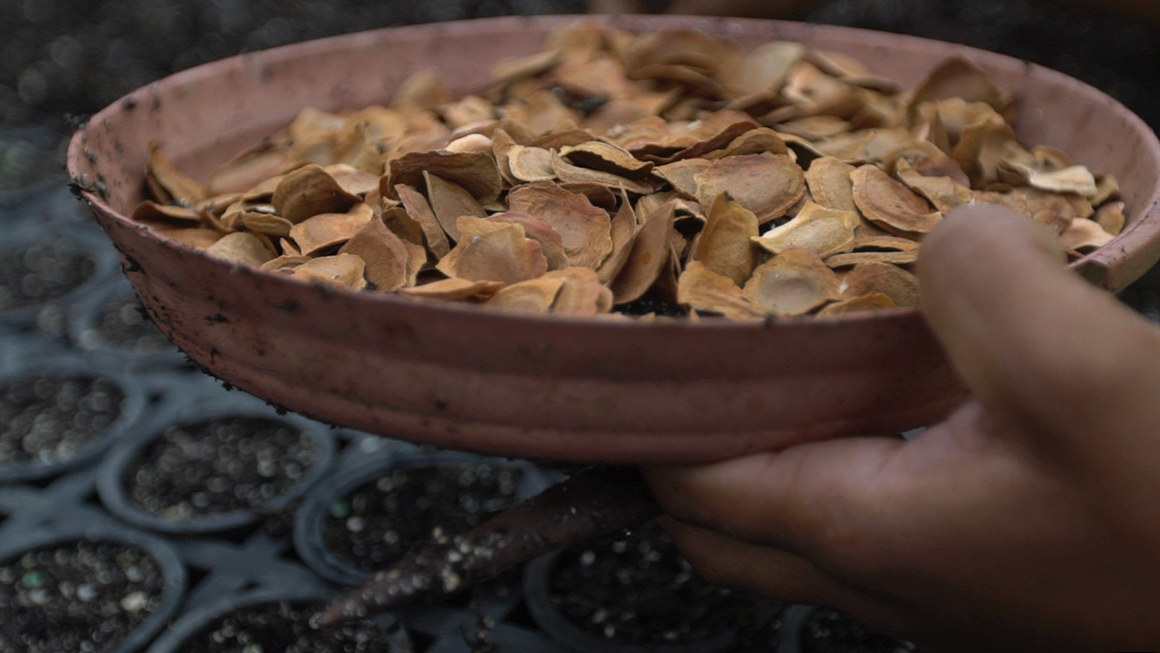 Research and development are key to forest restoration in Brazil. (Photo: Asteroide)

Symbiosis applies the same techniques to Brazil’s native species that people have used for thousands of years for practically all agricultural crops on the market.

In nature, seeds are wild. Some plants are larger and others smaller, some have more pulp and others less, some require more water. In short, wild plants lack the uniformity that makes commercial planting viable. Through a process that can take decades or centuries, farmers slowly selected, cross-bred and domesticated various species until they created the desirable traits one sees today in commercial products.

In the 20th century, a few exotic tree species were domesticated, including pine and eucalyptus, which are important for the pulp and paper industry. Applying technology and modern management to these species has increased their productivity and created a huge market for them.

The same process was not undertaken for the native trees growing in the then-abundant natural forests. But as deforestation accelerated, the supply of this high-quality wood wasn’t as limitless as people thought. Failing to improve native species means their productivity today is no greater than it was when Europeans first began cutting down brazilwood along the coast of Bahia in the 16th century. 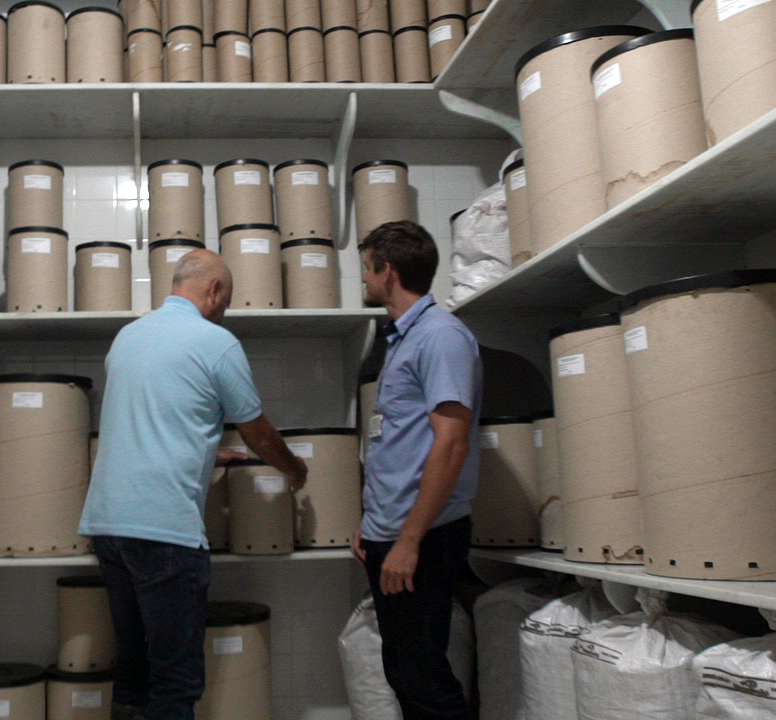 Productivity growth of eucalyptus, an exotic species that was genetically improved, versus productivity of native species in Brazil.

During Symbiosis’s first two years, a team searched through parts of the Atlantic Forest in four Brazilian states where conditions are similar to those in Bruno’s home base in Trancoso, looking for healthy native trees that could provide seeds. The team identified more than 2,600 specimens. “Selecting trees out in the field is the most important thing, because you don’t want to plant just any old jequitibá seed,” said Bruno. “You want to plant the seed of a beautiful tree that’s straight, healthy and bursting with leaves.”

After finding good-quality specimens and planting their seeds, Symbiosis is now breeding their descendants. It plants the seeds from the best trees beside one another to allow them to reproduce and conducts experiments for each species. It then monitors the trees over the coming generations, selecting the ones that produce the most wood, grow most quickly and need the least water.

Genetic improvement takes time, resources and effort, but it can greatly increase productivity.

Specimens with excellent traits can be cloned, a process that involves creating a new tree out of a piece of branch or stem. “Cloning helps create uniformity and scale,” said Felipe Garbelini Marques, Symbiosis’s forest improvement manager. He expects Symbiosis’s first genetically improved trees — which he hopes to see planted in 2021 — to be 20–30% more productive than unimproved trees.

The forestry experiments Symbiosis conducted yielded many lessons. Perhaps the most important was the need to grow many tree species together. Experiments showed that monoculture — planting an area with a single tree species — increases the risk of pests and disease and reduces productivity. Planting trees of different species within the same area leads to better outcomes.

In addition, the fact that different species grow at different rates can help diversify income and increase biodiversity. Timber is harvested from the faster-growing trees while the slower-growing hardwood species continue to grow. Once space is cleared, the faster-growing species can be replanted. In this system, no area is ever fully deforested, thereby maintaining biodiversity and improving the quality of soil and water.

Before and after restoration

Research on silviculture of native trees could help Brazil develop and expand its sustainable forestry sector. But very few companies are conducting studies because they require time and investment. Many timber companies simply haven’t pursued growing native trees because they’re unaware of their potential. 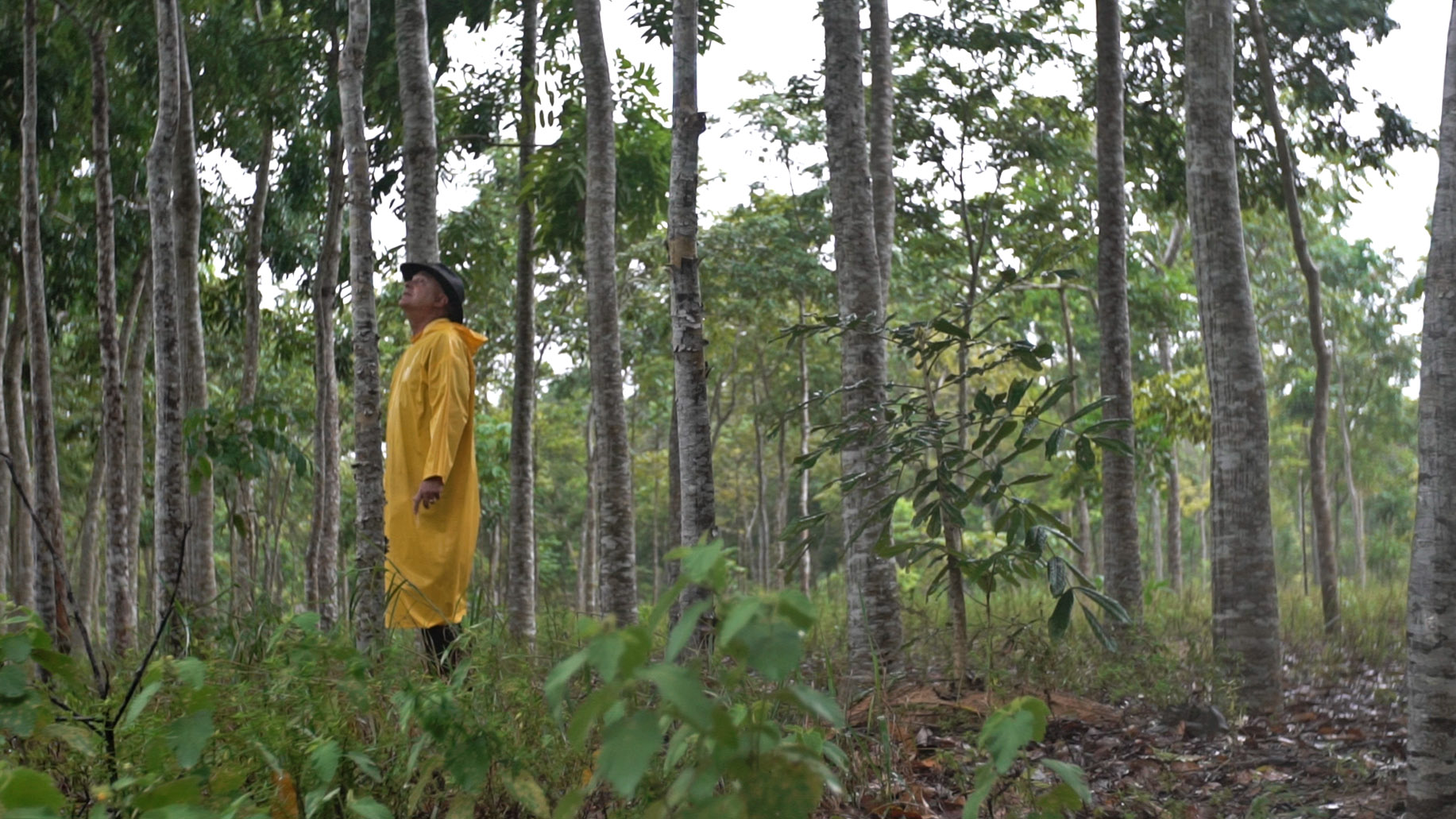 A 2019 study by WRI Brasil and the Brazilian Coalition on Climate, Forest and Agriculture highlighted the gaps and priorities in research of native species. It recommended that Brazil advance research in eight areas: seeds and seedlings, cloning, genetic improvement, wood technology, forest management, topographical and climatic zoning, wood product markets and forest legislation.

It identified 15 species in the Amazon and another 15 in the Atlantic Forest with economic value that could be enhanced with research. Symbiosis is already studying some of them, including brazilwood and ipê-felpudo.

“Research on genetic improvement and experiments concerning the growth of plantations are crucial to guaranteeing gains in quality and productivity for native species,” said Miguel Calmon, one of the authors of the study and a senior consultant for WRI Brasil. “The work by Symbiosis is pioneering and must be expanded if we want to scale up forest and landscape restoration in the world.”

The study’s economic modeling concluded that investments in research and development on native trees provide hefty returns. Over a period of 20 years, every $1 invested in research would generate more than $2 in returns, thanks to gains in productivity.

Bruno Mariani is not alone. Other rural producers, entrepreneurs and pioneers are also growing native trees for profit. In the VERENA project, WRI Brasil and partners put a team of economists, agronomists and forest engineers in the field to find the most representative experiences and business cases in Brazil.

The results showed the technical and economic feasibility of reforestation with native species and agroforestry systems at scale, as well as the many social and environmental benefits from those activities. Based on its findings, the VERENA team and partners have been working to improve public policies aimed at removing barriers and creating incentives for silviculture with native species and agroforestry systems. Based on this work, economic models and consistent business plans are being developed to attract potential investors and funders.

From Low-profit Pastureland to High-profit Forests

More than 65 million hectares of pasture land —an area the size of Texas — is moderately to severely degraded in Brazil, according to Lapig, the Universidade Federal de Goiás’s Image Processing and Geoprocessing Lab. Cattle farming on this degraded pasture is a low-investment, low-yield and low-return activity that uses almost no advanced technology. It persists because its operational requirements are few. Many farmers accept the low returns because cattle farming allows them to simply sell a few head of cattle when they run short of cash.

In contrast, technology and innovation drive Symbiosis’s business. Cultivating high-productivity trees does require considerable investment, but the returns are far higher than for ranching. An evaluation tool developed by WRI Brasil through the VERENA project showed an annual return on investment of 14%—a rate of return far greater than what raising cattle on degraded pasture yields. Silviculture of native species is profitable, the study found, even in the presence of unfair competition from illegal logging in the Amazon, which dramatically reduces the price of timber.

Farming native trees can create jobs, too. Cattle ranching on low-productivity pasture employs only a handful of people. But on Bruno’s farm, more than 40 people are already working on varying stages of reforestation, seed collection and seedling production, planting, maintaining the site, monitoring, and harvesting trees for sale. 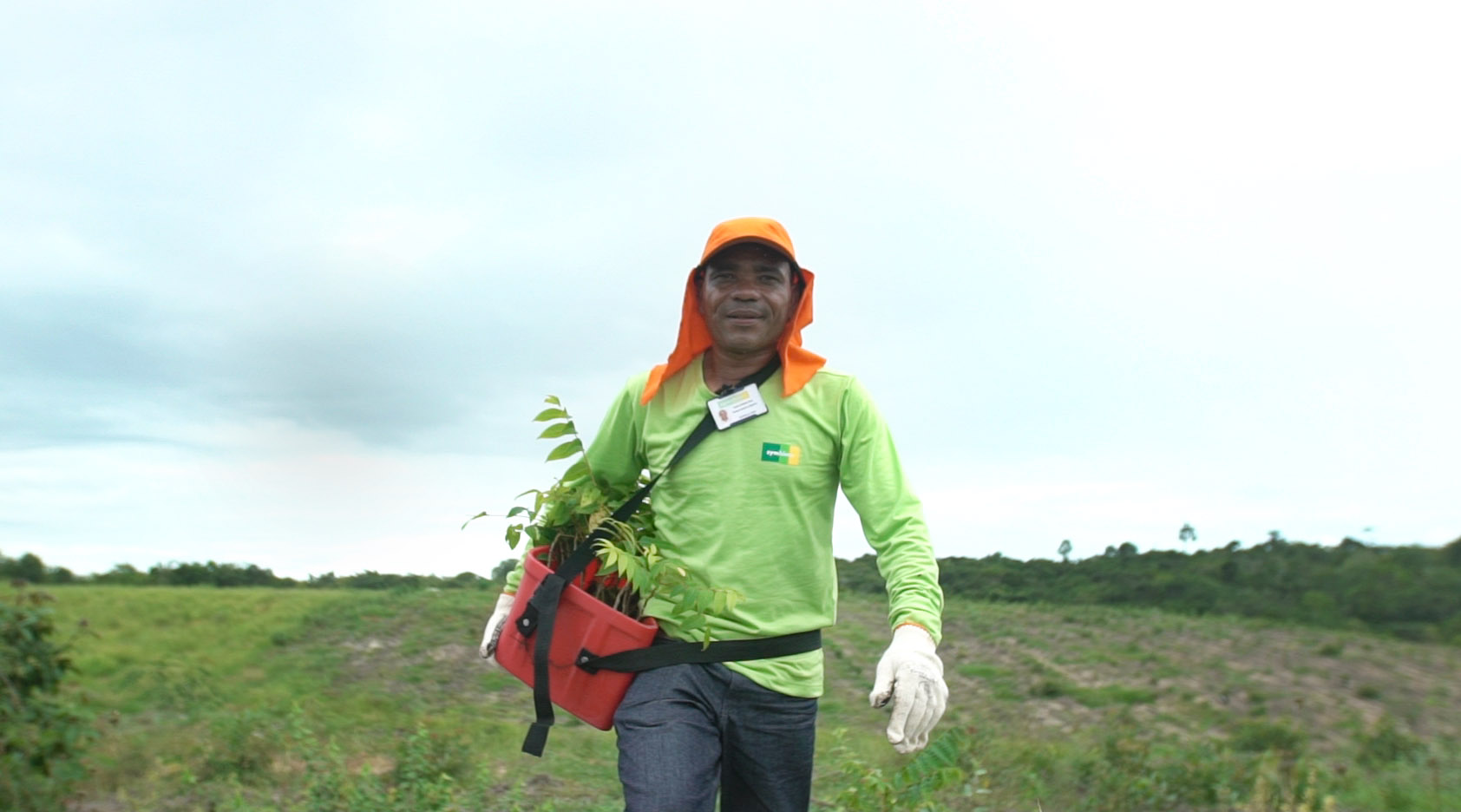 These trees also remove carbon dioxide from the atmosphere, helping to mitigate climate change. As part of the Paris Climate Agreement, Brazil committed to restore and reforest 12 million hectares of land by 2030, an area the size of England.

“Large-scale restoration is certainly necessary,” said Bruno. “But the way things are going at the moment, I don’t see it happening. We need to provide economic incentives.” A clear business model and the opportunity for economic gain would lead farmers throughout the country to choose to grow trees instead of maintaining degraded and low-productivity pasture. He hopes that Symbiosis’s efforts will serve as a model to other small, medium and large farmers.

“We need to create economic activity that supports reforestation and steers away from monocultures,” Bruno said. “We have to consider both the economic and environmental aspects.” In other words, transforming degraded pasture into profitable forestry enterprises — using technology and financial intelligence — could be the missing link to scale up restoration in Brazil. 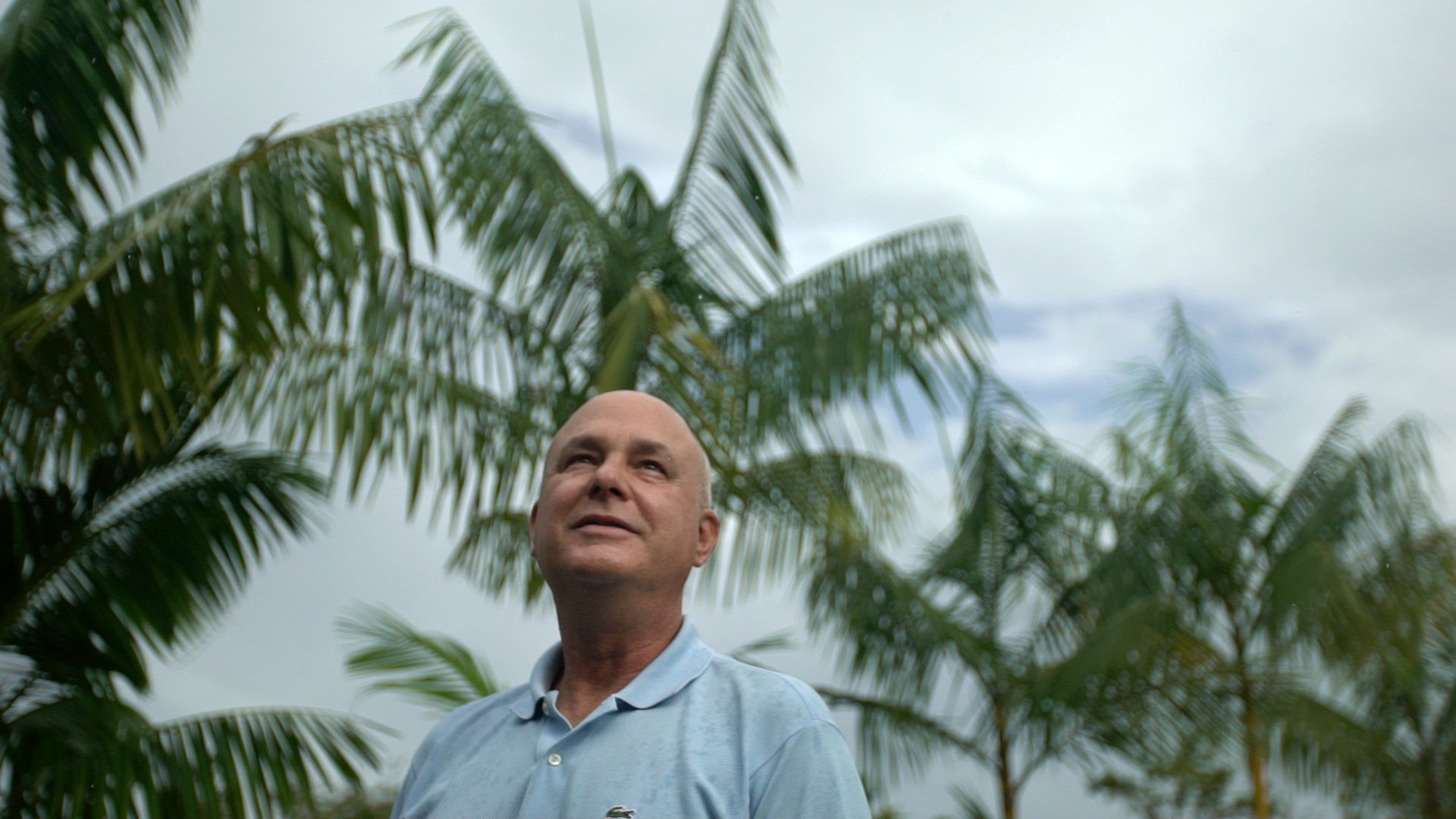 We need to create economic activity that supports reforestation and steers away from monocultures. We have to consider both the economic and environmental aspects.