Achieving a Balance of Sources and Sinks
Setting Emissions Reduction Targets in a Long-term Strategy: The Chilean Experience

The Paris Agreement aims to strengthen the global response to climate change by holding the increase in global average temperature to well below 2°C above preindustrial levels and pursuing efforts to limit the temperature increase to 1.5°C (UNFCCC 2015, 1–25). To achieve this temperature goal, the Paris Agreement also sets a long-term mitigation goal. Parties will aim to reach global peaking of greenhouse gas emissions as soon as possible and reduce emissions rapidly thereafter in order to reach a balance between anthropogenic sources and sinks of greenhouse gas emissions in the second half of the century. Both the long-term temperature goal and the long-term mitigation goal leave room for interpretation. Understanding how different interpretations of these two aspects relate to each other thus becomes a critical issue which can be explored with global scenarios that provide trajectories to limit global mean temperature increase to a given temperature level. A wide variety of scenarios is available in the published literature. However, the Principles of United Nations Framework Convention on Climate Change (UNFCCC 1992, 1–25) indicate that policies and measures to deal with climate change should follow the precautionary principle and be cost-effective so as to ensure global benefits at the lowest possible cost. Using cost-effective scenarios to explore relationships between long-term temperature and long-term mitigation goals is hence a particularly appropriate choice.

The Fifth Assessment Report of the Intergovernmental Panel on Climate Change (IPCC 2013) found that global mean temperature rise is approximately linearly related to the cumulative amount of carbon-dioxide emissions emitted into the atmosphere. This implies that a given temperature objective can be translated into a finite carbon budget. To stop carbon dioxide emissions from accumulating in the atmosphere and to stay within this budget, global carbon dioxide emissions have to become virtually zero at some point in time. This relationship also implies that if carbon dioxide emissions are higher in the near term, they have to decline steeper afterward, reaching zero levels earlier. The Paris Agreement’s long-term mitigation goals speak to all greenhouse gases. However, the approximately linear relationship between cumulative emissions and global mean temperature increase is mainly valid for carbon dioxide and other long-lived greenhouse gases, and is not applicable to short-lived climate forcers. For the latter, it is rather the annual amount of emissions that determines their warming effect. Nevertheless, because carbon dioxide is the dominant anthropogenic greenhouse gas, there is a clear relationship between the interpretation of the temperature target and the timing of reaching global zero greenhouse gas emissions. In a recent study (Rogelj et al. 2015), we showed that across a set of cost-effective mitigation scenarios that limit median warming to 1.5°C by 2100 (after temporarily exceeding that level earlier during the century), global zero greenhouse gas emissions are achieved around the year 2080, with a range across the available scenarios of 2060–85. Carbon dioxide emissions reach global zero levels earlier, around midcentury, with a range of 2045–60. For cost-effective scenarios that aim to limit global mean temperature increase to 2°C relative to preindustrial levels with at least 66 percent probability but do not manage to return it below 1.5°C by 2100, the timing of these mitigation goals is later. For example, global zero greenhouse gas emissions are only achieved during the last quarter of the 21st century (after 2075), and global zero carbon-dioxide emissions are achieved roughly in the third quarter of the 21st century (approximately 2050–75).

Achieving global mitigation targets requires national contributions that (in line with the UNFCCC’s principles) should be cost-effective to ensure global benefits at the lowest possible cost. Because mitigation potentials and capabilities between countries and regions differ markedly, regional emission reduction contributions toward achieving a cost-effective global zero mitigation goal also vary. For example, scenario data from five integrated assessment models that were produced as part of the European Union’s LIMITS project1 (Kriegler et al. 2013) illustrates this potential variation in the timing of reaching regional zero emissions in globally cost-effective mitigation scenarios for scenarios that hold warming to below 2°C relative to preindustrial levels with at least 66 percent probability. For some regions, the year in which regional zero GHG emissions are reached in such scenarios is roughly the same as the year in which global zero GHG emissions are achieved. For example, this is the case for the region centered on China, and the Middle East. Other regions achieve zero GHG emissions generally earlier. This is the case for Latin America (ca. 20 years earlier), North America (20–30 years earlier), Pacific OECD countries (ca. 20 years earlier), and reforming economies of Eastern Europe and the former Soviet Union (20–30 years earlier). Some regions show a generally later achievement of zero GHG emissions (like the region centered on India, the Rest of Asia region, and Europe). This delay in reaching zero GHG emissions at the regional scale is generally on the order of 10 years. Sub-Saharan Africa shows a very large range, and the available scenarios do not allow us to identify a clear trend here. 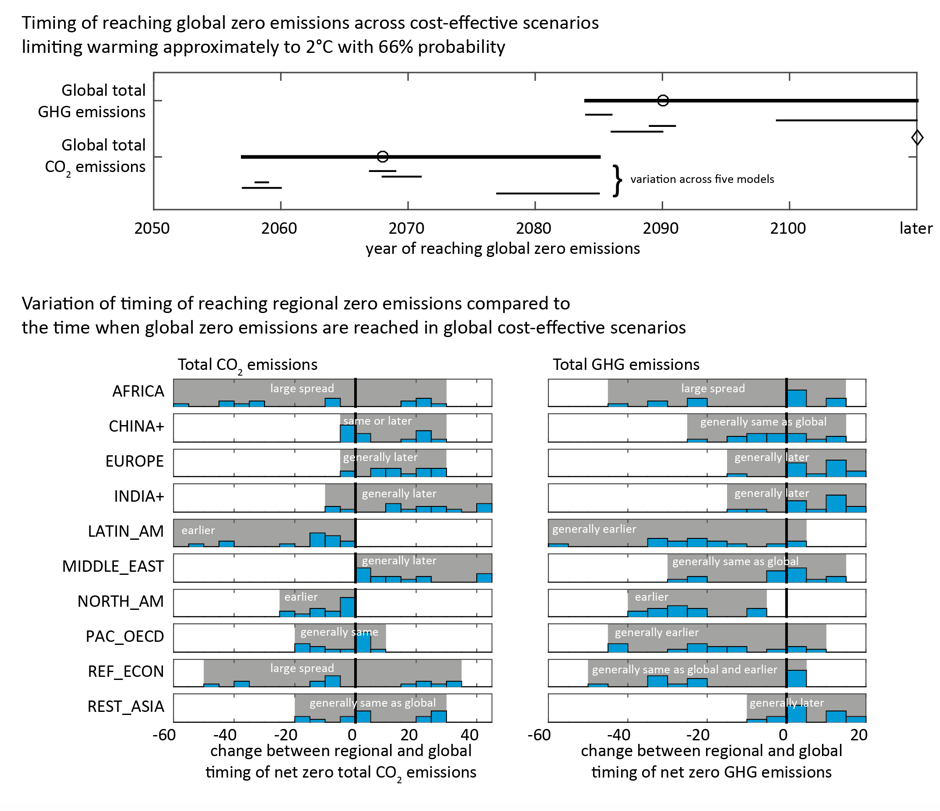 Figure 1: Variation of timing of reaching zero emissions levels globally (top panel) and regional variation (bottom panels). Variations are provided for ten reported regions.2 Lines in the top panel show the minimum-maximum range across all models (bold) and per model. Circles show the median across all scenarios and all models. Diamonds are shown in case all scenarios from a single model provide the same value. Blue bars in the bottom panels are histograms of the 15 available scenarios; grey ranges are the full range across all available scenarios. Data from the EU’s FP7 LIMITS project, hosted by the International Institute for Applied Systems Analysis (IIASA) and available online at https://tntcat.iiasa.ac.at/LIMITSPUBLICDB. Global greenhouse gas (GHG) emissions are aggregated with 100-year global warming potentials from the IPCC’s Fourth Assessment report. Regional definitions as provided by the study (see link above): AFRICA = countries of sub-Saharan Africa; CHINA+ = countries of centrally planned Asia, primarily China; EUROPE = countries of Eastern and Western Europe (i.e., the EU27); INDIA+ = countries of South Asia, primarily India; LATIN_AM = countries of Latin America and the Caribbean; MIDDLE_EAST = countries of the Middle East; NORTH_AM = countries of North America, primarily the United States and Canada; PAC_OECD = countries of the Pacific OECD; REF_ECON = countries from the reforming economies of Eastern Europe and the former Soviet Union; REST_ASIA = other countries of Asia.

It is important to note that this variation in timing of reaching regional zero emissions is purely informed by considerations of cost-effectiveness. The analyzed pathways represent a regional distribution of mitigation actions that are projected to achieve the global temperature target with the lowest overall mitigation costs. The UNFCCC also includes other important principles that refer to national circumstances, reflect equity principles, or support the principle of common but differentiated responsibilities and respective capabilities. To follow a global cost-effective path toward achieving the Paris Agreement’s long-term temperature goal, actions at the national level should consider these together with the limitations posed by a global carbon budget and a global cost-effective path. To be consistent with the requirement of cost-effectiveness, equity considerations should be dealt with by trading of emission reduction outcomes, supporting capacity building, transferring technology, and so on, rather than through the distribution of physical emissions between countries. However, cost-effective scenarios are not unchangeable. They can change with societal choices about the stringency of climate outcomes and the desirability of specific solutions. For example, if certain technology options, like nuclear power or large-scale bioenergy plantations, are undesirable, these preferences can be taken into account in cost-effective scenarios during their design phase. Such preferences are societal choices, which should be made by decision makers who base their assessment on the risks, trade-offs, and opportunities of specific mitigation options. Cost-effectiveness subsequently provides a concept to ensure that all desired outcomes are achieved in the most efficient way. All the potential variations in cost-effective pathways toward global zero emissions aside, the scientific scenario literature as assessed by the IPCC (2014) shows that achieving the stringent temperature goals set by the Paris Agreement is not possible without mitigation efforts in all regions.

2 Regional definitions of the data are provided at https://tntcat.iiasa.ac.at/LIMITSPUBLICDB/static/download/LIMITS_10+1_regions.pdf.

All the interpretations and findings set forth in this expert perspective are those of the author alone.