The critical role of energy production in global emissions

Energy production and use account for about two-thirds of global greenhouse gas (GHG) emissions. As such, this sector plays an outsized and critical role in countries’ efforts to develop and implement long-term strategies that meet climate goals. The sector is highly diverse, spanning electric power generation, transportation, buildings (heating and cooling), and industry.

Continuing business-as-usual with the existing energy system and current levels of CO2 intensity would likely lead to over 4°C of warming by the end of the century (IPCC 2014a; IPCC 2014b).  And current nationally determined contributions (NDCs) imply that the energy sector (i.e., fossil fuel combustion in electricity and fuels) would emit almost 1,260 gigatons (GT) of CO2 by 2050, roughly 50 to 60 percent more than the available carbon budget (IEA/IRENA 2017).

Beyond emissions, long-lived electric infrastructure is static, locks the user into dealing with fuel price volatility, and makes it even harder to take advantage of technology advancements in a timely manner. Investment cycles for electric-sector infrastructure are particularly long, which means that decisions made today have long-term implications for both climate and development goals. For example, electric power plants are considered to have lives of about 30–40 years during electric system planning. When the financial analyst runs their discounted cash flow model, it rarely extends beyond 40 years. However, these assets are lasting much longer. In December 2016, coal plants in the United States were an average of 39 years old, and over 10 gigawatts (GW) have been in operation for more than 60 years (Jell 2017). Globally, in 2011 about seven to eight percent of the coal fleet was over 46 years old (Finkenrath et al. 2012). Most of these decisions were made well before even criteria pollutants like lead, were recognized as harmful.

Therefore a decision today can become a commitment for more than 60 years, one that future generations feel they cannot undo. Today’s utilities are binding future generations to a set of fossil-fuel technologies without recognizing  the full life-cycle impact of these decisions.

Energy planning that considers the impacts of the extended lifetimes of energy assets increases the likelihood of both meeting climate goals and avoiding technology "lock-in," which can result in substantial stranded assets that impact the future financial health of utilities and act as a drag on economic growth.1 It might be worthwhile for today’s generations to consider whether a "stranded" cost in a power plant has met its useful life and decide to retire it even though it is still operational—which can be challenging because replacing it requires significant capital. Further delaying action on significant emission reductions from electricity production and use while at the same time planning for future energy demand would increase the need for new future energy investments.

In the electricity sector, as in life generally, it is important to start with the end in mind. In order to reach long-term goals, it is critical to envision what the future will look like. By creating an outline and filling in some of the details and a bit of the color, leaders can create an exciting picture of the future and can rally key decision-makers around a central goal. Some of the most ambitious goals achieved across the globe were articulated in such a way as to capture the imaginations of a wide group so that its members worked together, combining their skill sets, to achieve that goal.

The identification and analysis of key metrics across a variety of scenarios is the best way to check energy-related policies and investments for lock-in of carbon-intensive pathways. Metrics could include tracking (a) emissions (e.g., carbon, methane, and other greenhouse gases), (b) capacity and energy from recently installed generation technologies (i.e., is it changing?), (c) declining costs of carbon-free technologies, (d) increased performance of carbon-free technologies, and (e) how often goals are analyzed and updated.

It appears that examining 20–30-year futures is inadequate if most large capital investments have functioning lifetimes of 40 to 60 years. The decision to keep those assets running for these extended time periods commits society to decisions being made before their full impact to society can be understood. Thus, environmental impacts that will be felt on the time scale of centuries and should be tracked and analyzed across horizons of more than 50 years to fully consider how decisions today impact the future.

The best strategies will identify pathways that maintain flexibility and options for alternative pathways. Allowing for course corrections and the ability to take advantage of technology breakthroughs is critical. One of the main ways to lock-in a carbon-intensive pathway is to only move forward with commercially available technologies. Most widely used, commercially available technologies are carbon intensive (e.g., coal generation, natural gas combined cycle generation, natural gas combustion turbines), and many innovative, emerging technologies can significantly reduce emissions  (e.g., solar PV—panels and building-integrated, land-based and offshore wind, sustainable hydroelectric). Society, utilities, and governments all need to feel more comfortable walking away from the known technology to take a risk on the newer, cleaner technology. In other words, it might be societally beneficial to retire a generator before its useful life in order to meet other objectives; in so doing, the transformation of the electricity sector can be accelerated.

While long-term goals can inspire and set ambitious targets, the rapid development of new energy technologies necessitates a process that breaks down longer-term goals into a roadmap with shorter-term actions that can be more frequently reevaluated. Consider 10-year time frames between now and the 50-year goal and 5-year time frames in the next two decades, to break up the problem into more manageable time steps. Within those steps, be sure to cover all the key aspects needed for success, including technology, policy, regulatory, market, investment, and business models. Also consider all the critical stakeholder perspectives, including those of the utility, the regulator, the financier, and the end-user (Cory and Aznar 2014; Sterling et al. 2015). If any key aspect or perspective is left out, fatal flaws could be introduced into the design and short-term actions may deviate from the quickest path toward meeting the long-term goals. Frequent reevaluation of short-term and long-term goals is also critical to allow for incorporation of new technologies.

The figure below shows how three different long-term visions can be broken into short-term actions that are highest priority. Based on work done at the NREL (Cory and Aznar 2014; Sterling et al. 2015), it appears that three main futures will be emphasized in the electric sector: (1) low carbon, centralized generation, (2) rapid growth of distributed energy resources (DER), and (3) increased interactivity between transmission and distribution, as well as between utilities and end-users. Some regions are analyzing, quantifying, and setting specific priority goals under each category, in order to allow for meaningful planning of short-term steps that move toward the larger goals in each category. Other regions are letting these three potential visions play out without detailed requirements, but even these countries and regions use modeling to understand how their electric sector is changing and to quantify the potential benefits and costs of these different visions. 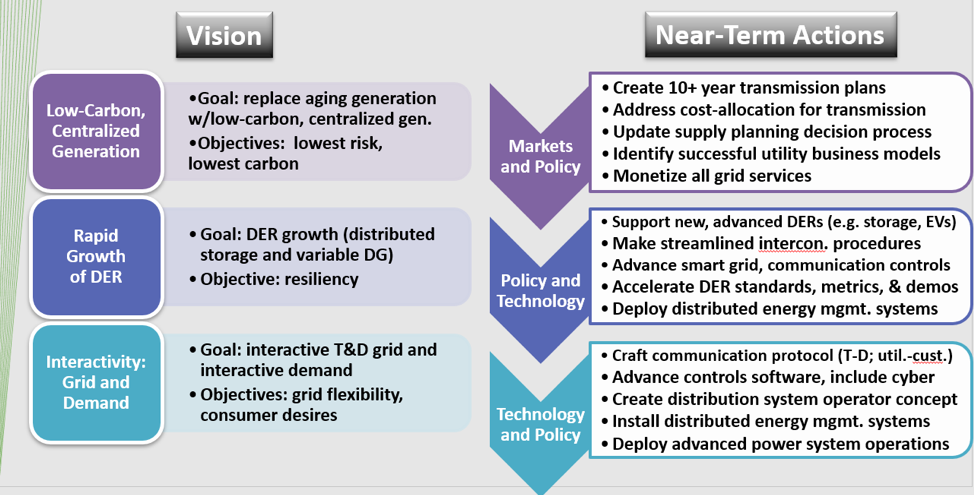 In the United States in particular, it appears that some form of all three of these visions is being realized; even so, each region will emphasize a different prioritization of these visions such that different aspects will dominate. For example, California is prioritizing rapid growth of DER, New York is prioritizing rapid growth of DER and interactivity, and Texas is emphasizing low carbon, centralized generation. Knowing the highest priority (and why) will be important for identifying and addressing the key near-term barriers and actions required to make the vision a reality. In other words, to embrace rapid growth of DER as the highest priority, addressing policy and technology become critical. This will likely include creating polices and incentives that support DER deployment, developing streamlined DER interconnection procedures (including increased transparency about where the electric system can host DER capacity), accelerating DER standards, metrics and pilot demonstrations, and deploying advanced software and hardware that can support DER operation and planning, such as distributed energy management systems.

Once a comprehensive roadmap that covers key aspects and perspectives is created, critical-path barriers that will restrict success toward the long-term end goal need to be identified across all the key time frames. The wide range of choices and options for near-term action could seem overwhelming, but it is critical to maintain focus on the highest priority tasks that will address key barriers.

Many things will contribute to changes in the electric sector worldwide in the next decade:

Advances in all of these areas are happening more rapidly in the electric sector than ever before. It is therefore critical to have and frequently update planning goals, strategies, planning processes, and investment approaches to be able to react to quickly changing improvements in technology. Just because a decision was made by an earlier generation doesn’t mean it has to constrain the current generation in its choices of technology. Revisiting analyses with the most recent cost curves and technology performance metrics will make it possible to change course as new options become more economical. Being sure to include innovative, emerging technologies in the analyses can help avoid locking into existing, commercially available technologies exclusively.

1 In this context, "stranded assets" refers to energy capital assets that must be retired prematurely or are underutilized because of climate polices (e.g., a carbon tax) or competition with lower-cost clean technologies, and fossil fuels that cannot be burned if a GHG target is to be reached (UNEP 2017).