Under the Paris Agreement, Parties have agreed to limit the increase in global mean temperature to well below 2°C, requiring a reduction of greenhouse gas (GHG) emissions to net zero in the second half of this century. Parties also agreed to submit nationally determined contributions (NDCs) to indicate their intended policies and are invited to formulate midcentury strategies indicating long-term mitigation and adaptation strategies in light of the overall Paris objective. Clearly, uncertainties about the future complicate the ability to develop such long-term strategies and make decisions. These uncertainties, for instance, involve not only economic, social, environmental, and technical developments but also unknowns related to the climate system. Scenario analysis has been developed as a method to explore the relevant uncertainties, but it can leave decision-makers with difficult choices. For instance, most scenarios in the literature include negative emissions as a key element, but it is still unsure if the volume of negative emissions suggested in the scenarios can be achieved. Similarly, decisions depend not only on unknown technology development (e.g., the ability to integrate intermittent renewable energy into the current electricity system or the emergence of alternative technologies) but also on uncertain social acceptance (e.g., of carbon-capture and storage).

Despite uncertainties, decisions need to be taken in the short term to achieve the Paris goals and stay below 2°C and preferably 1.5°C (IPCC 2018). Moreover, decisions taken today often have long-term consequences. For example, power plants built today are projected to have a 40-year lifetime, while their emissions might influence the world climate for centuries. Methods have been designed to support decision-making under uncertainty and achieve long-term sustainability. In the context of mitigation scenarios, for instance, a literature on so-called hedging scenarios emerged (Yohe et al. 2004). Similarly, methods have been developed to support decision-making under severe (deep) uncertainty (DMDU) for adaptation strategies. Deep uncertainty refers to situations characterized not only by many uncertain factors but also ones where it is impossible to work with a distribution of probability and some factors might be totally unknown (Lempert et al. 2003). Deep uncertainty also refers to the presence of multiple, divergent, equally valid worldviews or to when decisions adapt over time and cannot be considered independently (Hallegatte et al. 2012). Here a variety of approaches also exists (for an overview, see Marchau et al. forthcoming). The basic idea is to explore what could happen in the future, stress-test policy alternatives, and develop robust and adaptive plans.

This essay explores how DMDU approaches can be used to support decision-making on low-emission strategies in order to guide NDCs, taking into account uncertainties. We focus on dynamic adaptive policy pathways (DAPP) as an approach that can facilitate the design of policy pathways with low GHG emissions.

Dynamic adaptive policy pathways are a DMDU approach that explicitly includes decision-making over time. Following a stepwise approach (Figure 1), DAPP aim to develop a robust and adaptive plan consisting of short-term (low-regret) actions and long-term options to implement depending on how the future unfolds. They thereby help open the decision space and overcome policy paralysis resulting from deep uncertainty.

Although DAPP were originally developed for climate adaptation, it is possible that the method can also be applied to other policy fields, notably to help define mitigation responses. As such it would have different purposes: adaptation to changing conditions (adaptation pathways; see Haasnoot et al. 2012; and Ranger et al. 2013), enabling socioeconomic development (development pathways), and transitioning to a desired future, for example a low-emission and climate-resilient society (transition pathways; see Burch et al. 2017; and Tàbara et al. 2018). Such policy pathways can all be evaluated based on their emissions to identify low-emission strategies and pathways.

The DAPP approach evaluates policy pathways under multiple alternative futures. Policy pathways are sequences of decisions, investments, actions, and portfolios of actions. As a result, the path dependency of potential actions is illuminated. This is important because past investments will affect the feasibility, costs, and benefits of future options. Multiple pathways are typically visualized in the form of a “metro map” or decision tree, with time or changing conditions on one of the axes (Figure 2).

DAPP start from the promise that policy actions have an uncertain design life, and might fail sooner or later to continue achieving objectives as operating conditions change (i.e., when they reach an adaptation tipping point, or ATP). Similarly, opportunity tipping points may occur. These are points at which a particular action becomes feasible or attractive, for example because of lower costs of actions or because of technical developments. Also, certain actions can have required conditions or actions (e.g., a successful pilot), or long lead times (e.g., the planning and construction of infrastructure). As a result, they cannot be considered to be viable actions for the current conditions, but they can be considered for implementation at a later point.

Figure 1. Steps for the DAPP Approach 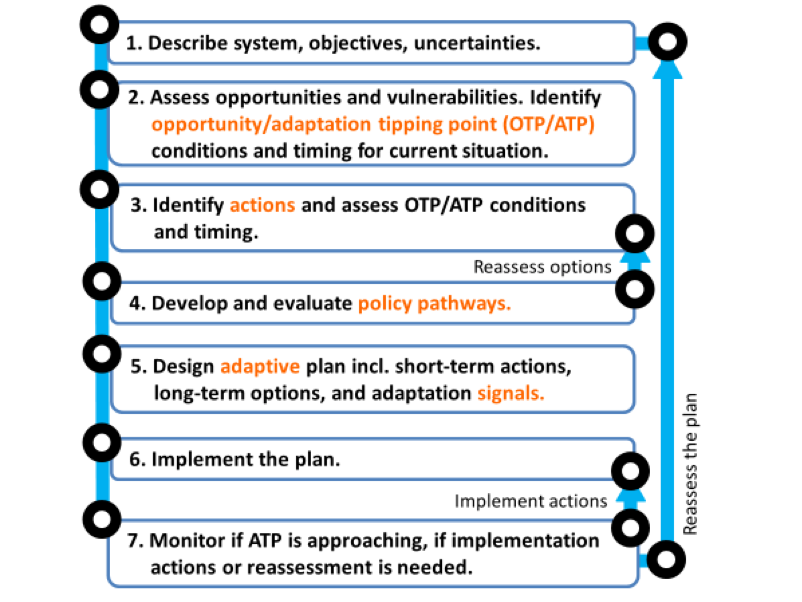 Here, we focus on policy pathways that describe a trajectory of decisions and investments that aim to reach carbon or emission goals over time, taking into account relevant uncertainties.

The DAPP method proposes that policy pathways are designed by sequencing policy options while taking into account their tipping point conditions and synergies and antagonisms between options that may extend the lifetime of an option.

Uncertainties that play a key role in emission mitigation plans include, for instance, technology performance and societal support, the actions of other parties, and uncertainties regarding the effectiveness of efforts to reduce emissions. Negative emissions play a key role. If wind power does not perform in the future, it can be replaced with photovoltaic (PV) solar cells. However, if policymakers decide to rely heavily on negative emissions in the long-term, current emissions resulting from a delayed response might be difficult to compensate for if such technologies do not perform as expected in the future.

It will thus be important to see climate policy in an integrated way—as decisions can also determine an adaptation tipping point. Sequencing actions may then result in a cumulative reduction of greenhouse gases (more or less if the actions influence each other). Some actions are not viable today (e.g., Portfolio A in Figure 2), for example, because of the time needed for implementation or because of the need for technological developments. Other actions may only be implemented if other actions have been implemented before; for example, an action is only possible after a successful pilot to overcome uncertainties about the performance or lack of societal acceptability. For example, a pilot program of autonomous cars or an energy neutral city may be required to test and strengthen societal support before it is possible to implement such actions on a larger scale. 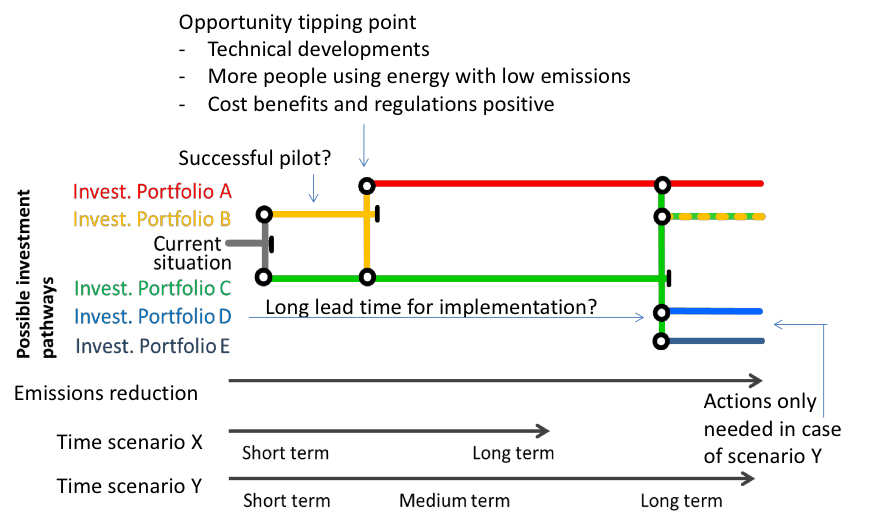 Multiple parties are involved in decision-making on emission reductions, including central and local governments as well as companies and households.  Ideally, the actions and pathways of different parties are streamlined and made consistent, since actions taken by one actor could prevent or affect actions by others (positively or negatively). For example, Germany’s investment in PV cells decreased their cost, to the point that PV-based electricity is now cheaper than fossil alternatives in countries with high PV potential. The opposite may happen with bioenergy, whose use in transport may mean that it cannot be used in the power sector. Also, if some parties are less successful in reducing emissions, other parties need to do more.

Monitoring is crucial to detect the performance not only of a plan but also of other parties involved to assess whether more effort is required. Monitoring is also needed to detect signals for newly available actions or new insights into system relations that require implementation or adjustment of planned actions. Technological developments, for example, could increase the scope of potential actions or their performance. In addition, changes in the costs and benefits of actions or new regulations may trigger implementation of those actions.

Once alternative pathways have been designed and evaluated, and preferred low-emission pathways selected, an adaptive plan can be developed. Evaluating pathways is different from evaluating single investments and involves consideration of the costs and benefits of sequencing and switching between actions. In addition to a set of short-term actions to be implemented, preparatory actions must be determined to keep the long-term options open. Preparatory actions include, for example, reserving the space needed to implement actions (e.g., windmills or bioenergy).

When to take action?

Delaying actions may, however, have different consequences when it comes to low-emission policy pathways for climate mitigation compared to climate adaptation. Delaying actions to lower emissions means more has to be done in the future, requiring more negative emissions. Thus, there is a long-term relationship (path dependency) with the today’s actions (or inaction). Delaying actions thus means counting on options that may be available in the future and may need strong contingency planning to become robust against future failure. For climate adaptation, most decisions can be postponed as long as enough time, space, and resources are available to implement them before an adaptation tipping point.

Policy pathways provide insights into available policy options and path dependencies between multiple actions and sequences of actions, which helps identify short-term actions to prepare and keep long-term options open, to implement, if necessary. Tipping points help identify when to take actions, both in terms of opportunities to start implementing actions and in terms of thresholds that require new or additional actions to continue achieving the specified goals. Signposts are used to monitor for signals that a tipping point is approaching to implement or adjust the plan. For successful implementation, pathways need to be complemented by good, continuous governance (Bosomworth et al. 2017), in which all stakeholders work toward the overall management goal.

All the interpretations and findings set forth in this expert perspective are those of the authors alone.