A mapping of the alignment between the 2030 Agenda for Sustainable Development, which aims to end poverty and hunger and protect the environment, and the Paris Agreement, which addresses climate change, shows that beyond Sustainable Development Goal (SDG) 13 (which explicitly addresses climate action), all seventeen SDGs have corresponding actions in the Nationally Determined Contributions (NDCs) to the Paris Agreement. Accordingly, the extent of alignment between these two agendas provides significant opportunities to approach their implementation in an integrated and synergistic manner (Northrop et al. 2016).

A cohesive, integrated planning and implementation framework that ensures that climate actions contribute to the achievement of the SDGs and vice versa is essential if these synergies are to be efficiently leveraged for global sustainable development. To support this type of integrated planning at the national level, the Millennium Institute has recently developed the Integrated Sustainable Development Goal (iSDG) model, a simulation tool that enables the analysis of individual policies and complex strategies designed to achieve the SDGs, as well as the testing of their likely impacts before they are adopted. This model could be of great use to countries in conceiving long-term low-emissions development strategies.

The iSDG model is constructed starting from the well-vetted, time-tested, and validated Threshold21 model (Barney 2002; Pedercini and Barney 2010), which has been applied to support planning in over 40 countries since 1993 and according to a recent review (Allen et al. 2016) is the most suitable modeling framework for national SDG planning. The Threshold21-iSDG model (iSDG) was awarded the prize for best system dynamics application at the 2017 Conference of the International System Dynamics Society.

The iSDG model integrates in a single framework the economic, social, and environmental aspects of development, providing a comprehensive and long-term perspective on a country’s possible futures. The model simulates the fundamental trends for SDGs until 2030 under a business-as-usual (BAU) scenario, and supports the analysis of alternative strategic scenarios. Cross-sector impacts of individual policies can be traced and assessed, and synergies emerging from the interaction of multiple policies can be identified, quantified and leveraged.

Geographical disaggregation in the iSDG allows for tracking many indicators at rural versus urban levels. Also, the model adopts a high level of detail for critical indicators, for example, by representing population and education by gender and age; mortality by age, gender and 13 different leading causes; and poverty by percentile. For many indicators, the level of disaggregation can be modified in order to address more precisely a country’s critical issues.

The iSDG model consists of 30 interacting sectors (MI 2016), representing the most central and critical mechanisms underlying the development process (Figure 1). Economic sectors represent the fundamental macroeconomic agents (firms, households, government, finance, and rest-of-the world) and their interactions, based on a financial flow consistency framework. Production is based on supply-driven production functions with a fully endogenous treatment of factor productivity. Social sectors endogenously represent the major dynamics related to demographics, health, and education that determine poverty and employment levels, as well as trends for infrastructure development. Environmental sectors allow for the assessment of changes in land use, soil quality, water withdrawal and supply, energy consumption and supply, material consumption, emissions and waste, and biodiversity. 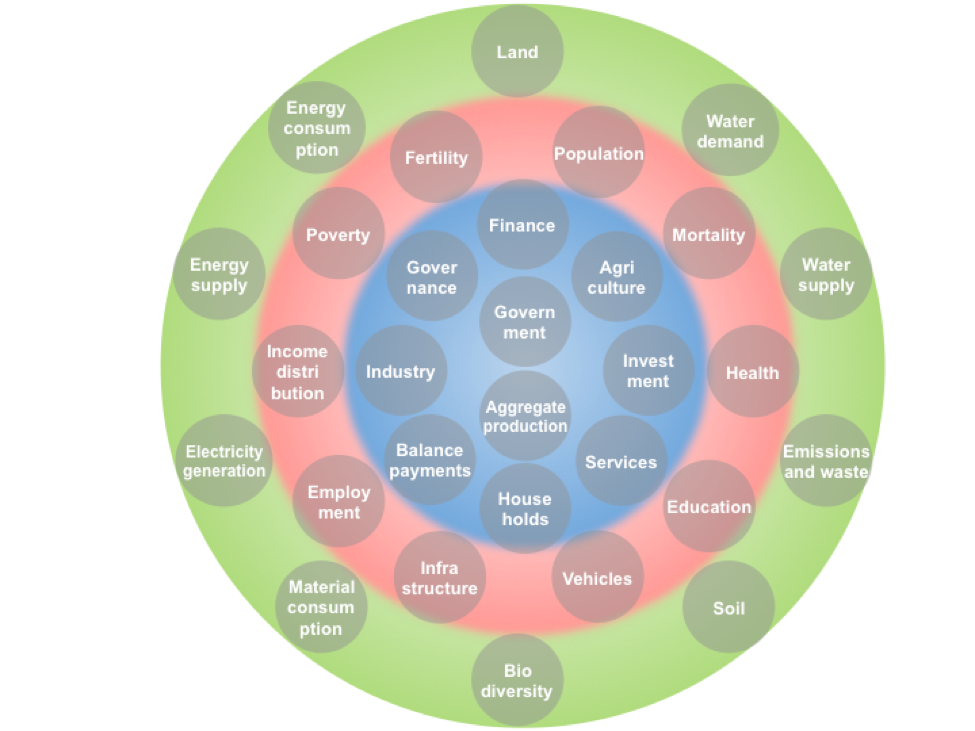 The development and implementation of the iSDG model involve formal validation tests for system dynamics models, including both structural and behavioral tests (Barlas 1996). For behavioral validation, we use an extensive database including data series for about 500 indicators over the period 1990–2016 to assess the model’s ability to replicate historical trends for key indicators. This intensive validation process is coupled with expert input in order to factor in countries’ specificities. Still, given the long-term nature of the model and the issues it addresses, projections should be taken not as precise forecasts but as reference scenarios realized under a specific set of assumptions.

The iSDG model has been implemented to date in five countries—Tanzania, Côte d’Ivoire, Senegal, Malawi, and Nigeria—supporting integrated analysis of SDG strategies, fundamental for the alignment of National Development Plans (NDP) with the 2030 Agenda (Collste et al. 2017; Pedercini et al. 2018). The following section summarizes results from the analysis of emissions, climate change impacts, and adaptation measures in Senegal and Malawi.

The simulations described below were run with the iSDG models developed for Senegal and Malawi to demonstrate the interconnected nature of climate change impacts and policies. The simulations illustrate different ways the models can be used in the formulation of long-term low-emissions development strategies.

The scenarios shown in Figures 2a and 2b assume that global average temperature will increase by 1.4 degrees Celsius by the year 2050. The figure compares the BAU case, in which no new policies for climate change or SDG attainment are adopted, with a case in which a mix of policies is implemented for attainment of the SDGs. The SDG policy mix includes investments in renewable energy (photovoltaic and hydropower at large and small scales), energy efficiency (in industry, domestic, and transportation sectors), and sustainable agriculture. These policies reduce the level of carbon emissions per unit of value added. The reductions are, however, overwhelmed by the growth of the economy and per capita consumption of goods and services.1 This demonstrates the great challenge of decreasing absolute GHG emissions in developing countries that are under pressure to grow their economies to lift their citizens out of poverty. In per capita terms, the emissions from Senegal and Malawi are still very small compared to those of high-income countries, and their contribution to global emissions is not very significant.

Figure 2. Per capita GHG emissions in CO2 equivalents in Senegal and Malawi under business as usual (BAU) assumptions compared with emissions under a policy mix for SDG attainment. 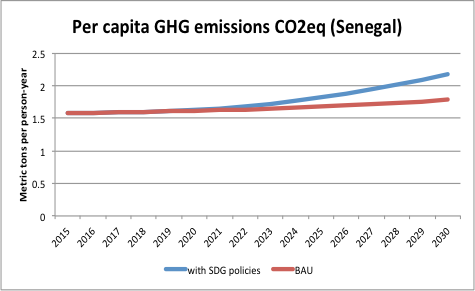 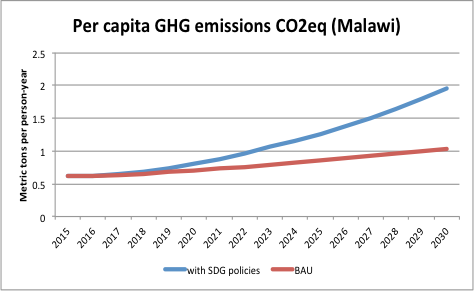 Figures 3 show estimated climate change impacts on economic growth (in terms of change in real GDP over time) and poverty (as the proportion of the population under the poverty line) in Senegal and Malawi. The figures compare BAU simulations with and without climate change. In this scenario climate change is assumed as a 1.4 degree Celsius increase in global mean temperature by year 2050.

Figure 3. Estimated impacts of climate change on real GDP and poverty. The BAU scenario assumes an increase in global temperatures of 1.4 degrees Celsius by 2050 due to climate change. 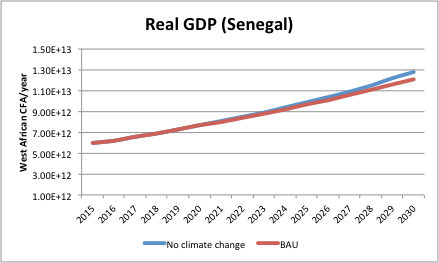 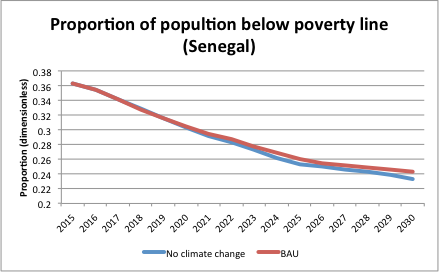 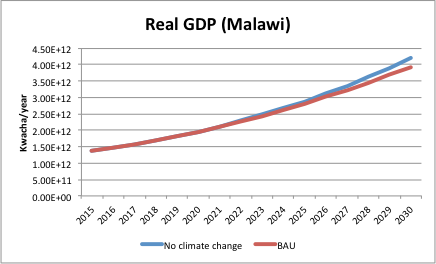 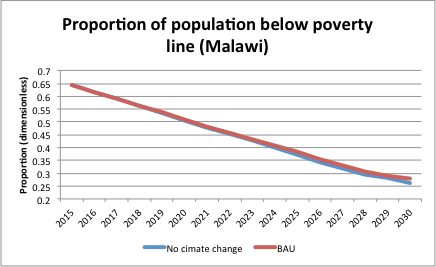 Table 1. Simulated BAU Values of Real GDP and Proportion of Population below Poverty Line at Year 2030 for Senegal and Malawi with and without Climate Change (CC)

The simulations demonstrate the negative impact of climate change on economic growth and its positive impact on poverty levels. Climate change causes increased frequency of disaster events, in particular draughts and flooding, in the two countries. Disaster events cause deaths and damage to property and infrastructure that adversely impact productivity, causing the reduction in GDP and increases in poverty levels shown in Figures 3 and Table 1. Increased temperatures associated with climate change also negatively impact agricultural yields and consequently food security.

The iSDG model can run any number of different policies concurrently. In the following case a policy of investing in infrastructure for climate change adaptation is run in isolation to demonstrate cross-sector impacts. Figure 4 shows estimations of climate change adaptation on numbers of people impacted by disasters, agricultural production, economic growth (shown as change in GDP over time), and poverty compared to the business-as-usual case with no climate adaptation policy. 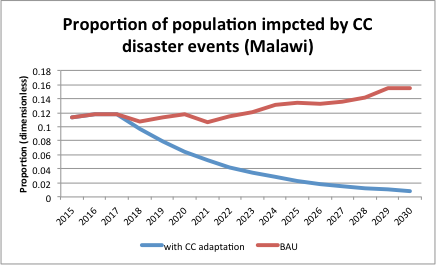 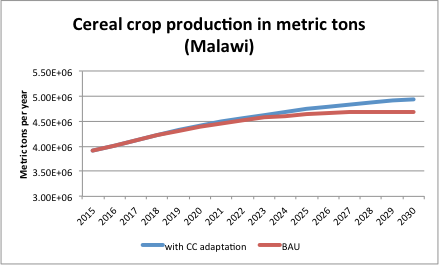 Figure 4 (Proportion of population impacted by CC disaster events (Malawi)) shows the direct impact of the climate change adaptation policy in reducing loss of life and destruction of public and private assets due to disaster events. Adaptation policy improves productivity in the agricultural (Figure 4 -cereal crop production in metric tons (Malawi)), industrial, and services sectors, causing higher GDP and lower poverty than in the business-as-usual case. 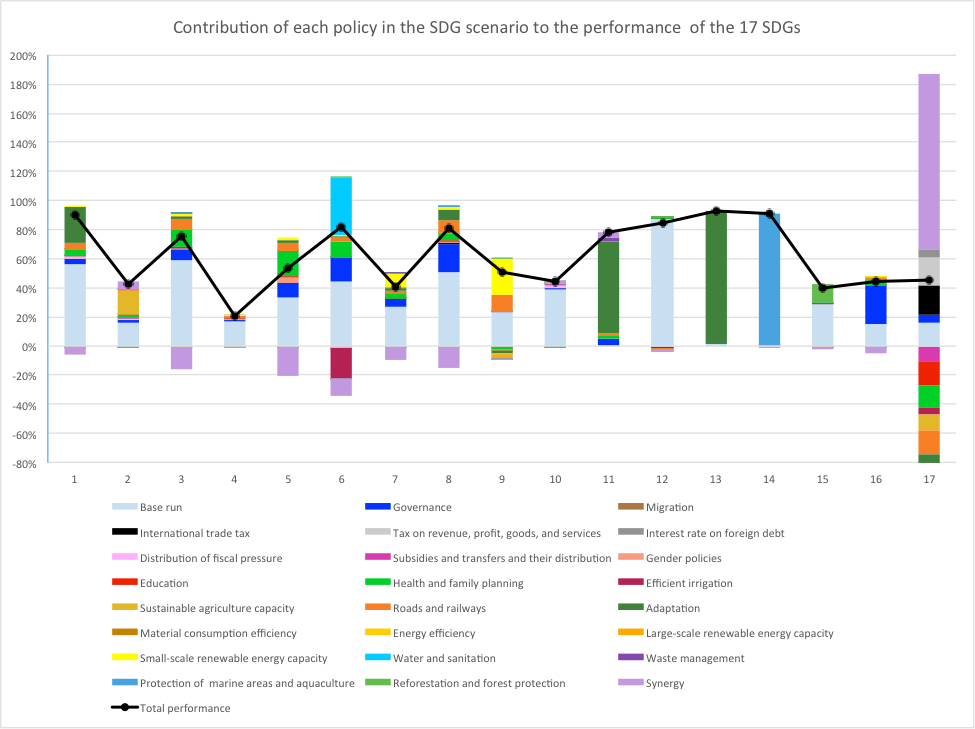 Note: Synergy can be positive or negative and occurs when the contribution of policies in combination is either greater or less than the sum of the same policies implemented individually. 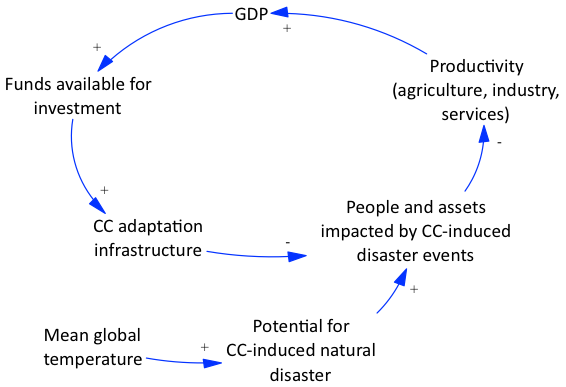 A word of warning: The feedback loops described above can lead to deepening downward spirals if the need for policy to adapt to climate change is not recognized. For example, if climate-induced disaster events damage human well-being and productivity, funding available for investments in health, education, infrastructure will erode, further undermining productivity in a vicious cycle. Similarly for food security, if productivity is damaged by climate change, nutrition and health will decline, causing further loss of productivity. As global mean temperature is expected to increase over the coming decades, it will be important for policies to direct reinforcing feedback loops in directions that support climate change resilience.

The Integrated Sustainable Development Goal (iSDG) model can help countries capture interactions between possible climate mitigation and adaptation and the SDGs across sectors, for the 15-year SDG time horizon and beyond. Simulations demonstrate that climate change adversely impacts economic growth and worsens poverty levels; these effects propagate across other sectors such as food production and food security, health, and others, creating feedback loops that potentially magnify the economic and social impacts of climate change. In Senegal and Malawi, climate change impacts are expected to manifest in disaster events, including drought and flooding that can have severe impact on productivity. Further simulations with the iSDG model show that investing now in climate change adaptation measures, such as green infrastructure and ecological agriculture, can mitigate future damage.

For further reading from the Millennium Institute, visit https://www.millennium-institute.org/publications

1 The per capita GHG emissions shown in Figure 2 are preliminary estimates and do not necessarily reflect the views of the Governments of Senegal and Malawi.

All the interpretations and findings set forth in this expert perspective are those of the Millennium Institute alone.