Achieving a Balance of Sources and Sinks

The Paris Agreement calls for nations to significantly reduce the risks of climate change by limiting global temperature rise to “well below 2°C above pre-industrial levels and to pursue efforts to limit the temperature increase to 1.5 °C.” The Agreement goes another step further to outline how that can be achieved—Article 4.1 states that countries must reach peak emissions as soon as possible “so as to achieve a balance between anthropogenic emissions by sources and removals by sinks of greenhouse gases in the second half of this century” This, the Agreement notes, must be done on the basis of equity.

Signatories to the Agreement have already submitted their first round of nationally determined contributions (NDCs), which outline the steps each are taking to address climate change. A handful of member states have gone further and submitted their long-term strategies extending out toward 2050. Concern remains high, however, that the pledges are falling short. Analysis from Climate Interactive, and every other analytic effort that has looked at the pledges to date, finds a persistent emissions gap between the Paris Agreement pledges and the emissions reductions needed to limit warming to well below 2°C.1 In the coming years, another round of NDCs will be submitted, and more long-term strategies will be submitted, which offer a chance for increased ambition.

Given the long-term goals, the physics of our climate system, and the UN sustainable development goals, the portfolio of emissions pathways a country can take is not limitless. For member states looking to help close the emissions gap and minimize temperature change in line with the Paris Agreement, peaking national emissions and then working to achieve a balance of emissions and sinks around midcentury is a strong path to take. 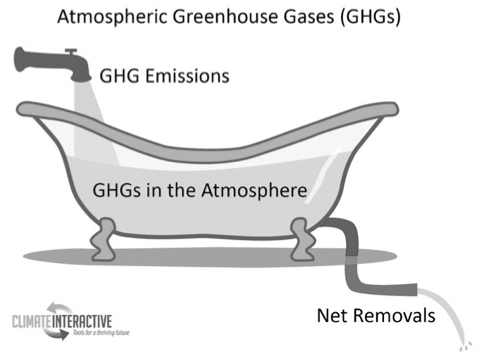 To understand what the Paris Agreement architects meant by “achieve a balance between anthropogenic emissions by sources and removals by sinks of greenhouse gases in the second half of this century,” think about a bathtub. When the water level is too high in a tub, how do you make it stop? You either turn off the faucet or open the drain. We can think of the water level in a tub as the concentration of greenhouse gases (GHGs) in the atmosphere. Stopping the rise is a matter of ensuring that what is emitted (what pours into the tub through the faucet) is no greater than what is being removed from the atmosphere (leaves the tub through the drain). The concentration of GHGs in the atmosphere will stabilize only when emissions fall far enough to equal the rate at which GHGs are being removed from the atmosphere. If that balance occurs at a low enough GHG concentration, then eventually warming will slow and stop.2

For us to have any reasonable chance of limiting warming to 1.5°C (i.e., a >50% chance), global emissions and removals must come into balance by about 2050.4 Achieving net zero anthropogenic emissions globally will require deep greenhouse gas emission reductions. A critical mass of countries must reach net zero emissions at the national level, with some going beyond to become net carbon sinks.

A handful of countries have already set net zero targets:

The leadership shown by these nations will hopefully inspire other countries to set their sights on similar ambitions to achieve net zero as they submit their long-term midcentury strategies to the United Nations Framework Convention on Climate Change, required under the Paris Agreement by 2020. In particular, developed countries should consider setting goals to become net zero in emissions before 2050. Best efforts should be taken by all to peak and reduce emissions as rapidly as possible, recognizing that the carbon budget does not offer room for continued emissions growth globally.

At Climate Interactive, we used our C-ROADS model to explore more than 700 scenarios that limit expected warming to no more than 2°C by the end of the century, each with different pathways for the developed nations and developing nations.10 For major emitters like the United States, the European Union, and China, delays in achieving balance that extend well into the second half of the century would place a higher burden of emissions reductions on everyone else. There are some scenarios that keep warming below 2°C in which major emitters reduce their emissions rapidly but don’t go all the way to achieving balance and instead maintain a low level of emissions throughout the century. But this is only possible if there is room in the carbon budget from avoided emissions elsewhere, or successful carbon dioxide removal that effectively creates a larger carbon budget. Greater ambition today pays off in the long run. For example, if China reaches peak CO2 emissions well before its 2030 Paris pledge and then begins to reduce its emissions, more of the total remaining carbon budget is available for others, particularly developing nations.

Importantly, all scenarios consistent with warming of no more than 2°C required all major emitters to peak their emissions and then decline. We grouped smaller nations into larger economic regions and found that, cumulatively, emissions must peak, if they haven’t already, and be near net zero in the second half of the century. For developing nations as a group, overall emissions growth did not continue past 2030, and steady reductions in greenhouse gas emissions began shortly thereafter. Enabling this level of ambition will require additional finance and capacity building to ensure the responsibility is being shouldered by those that have the most capacity and are most responsible for emissions to date.

Since the political ambition to achieve the necessary level of emissions reductions continues to be insufficient, many are turning their attention to the sinks side of the balance equation. How much potential is there to draw greater amounts of carbon out of the atmosphere? Scenarios that keep warming well below 2°C from the integrated assessment models that the Intergovernmental Panel on Climate Change (IPCC) relies on include large amounts of these carbon dioxide removal (CDR) approaches to increase carbon sinks. This is mostly a factor of the tough situation we are in, where the window to stay below 2°C is closing. The reliance on negative emissions technologies has drawn criticism from some, however, who highlight that there is a risk in basing action on negative emissions approaches that have not been proven at scale.11 If it takes decades to try out negative emissions technologies and they don’t work out, there is a risk that we will have used up all of the carbon budget and have no way to avoid global temperature change above 2°C. The forthcoming IPCC special report on 1.5°C will review the latest carbon dioxide removal literature further. Through an initial literature review at Climate Interactive, we found that about 13 gtons CO2/year could be removed with CDR approaches by the second half of the century under optimal conditions and a portfolio of technologies (e.g., widespread land availability that doesn’t compromise food security, sufficient financing, and successful technology development).12

Not many countries have begun to adopt policies to promote carbon dioxide removal to date, beyond tree planting and ecosystem restoration. The integrated assessment models favor bioenergy carbon capture and sequestration (BECCs). However, like other CDR approaches, the land requirements are sobering. To remove 10 gtons CO2/year with BECCs would require an area of land larger than India, and potentially much more.13 China is one country where significant efforts to increase carbon sinks are under way. China stated in its NDC that it plans to increase its forests by 4.5 billion cubic meters from 2005 levels by 2030, which builds on China’s massive afforestation effort already under way (China’s forest stocks were estimated to be 15.1 billion cubic meters from 2009 to 2013).14

As more countries announce net zero plans, there are a few things to watch out for:

As countries prepare long-term midcentury strategies, including a net zero target for emissions will help put the world on course to achieving a balance of greenhouse gas sources and sinks and may help galvanize momentum toward limiting further climate change. Net zero is also a nice point to aim for, since subnational regions, cities, companies, and institutions can also set their own parallel targets (and many already are). While the path ahead only gets steeper with more delays, there are also opportunities to be seized in making the transition—for example, air quality will improve as polluting power generation facilities are closed, and jobs will be created to build and maintain the clean energy infrastructure that paves the way forward.

2 Stabilizing CO2 concentrations does not necessarily stabilize temperature. There is a second bathtub that is important: the heat balance of the Earth’s surface, increased by net radiative forcing less net heat transfer to the deep ocean.

6 “Sweden will have no net emissions of greenhouse gases into the atmosphere by 2045.” Swedish government press release, June 2017, https://www.government.se/press-releases/2017/06/riksdag-passes-historic-climate-policy-framework/.

7 “Submission by Norway to the ADP,” https://www4.unfccc.int/Submissions/INDC/Published%20Documents/Norway/1/Norway%20INDC%2026MAR2015.pdf.

The interpretations and findings set forth in this expert perspective are those of Climate Interactive.