So it is heartening that U.S. President Joe Biden made tackling the climate crisis a core pillar of his campaign and now his presidency. From rejoining the Paris Agreement and activating agencies across the federal government to be part of the climate change solution, President Biden has once again pointed the United States in the right direction.

Another critical opportunity to show real leadership on climate change is just around the corner.

The Biden administration announced that before it convenes the Leaders’ Climate Summit on Earth Day (April 22, 2021), it will unveil a new greenhouse gas emissions-reduction target, likely for 2030. This target will be the centerpiece of America’s new national climate commitment under the Paris Agreement (known as a Nationally Determined Contribution, or NDC).

The first U.S. target under the 2015 Paris Agreement aimed to reduce annual climate pollution 26-28% below 2005 levels by 2025, a milestone toward the country’s long-term goal of reducing emissions 80% below 2005 levels by mid-century. Consistent with the latest science, President Biden signed an executive order on January 27, 2021 calling for the United States to achieve net-zero emissions by no later than 2050, however he has not yet articulated a comprehensive near-term target.

Based on available research, our recommendation is that the United States should aim to cut emissions in half by 2030 compared to 2005 levels. This target is both ambitious and attainable and offers major economic and social benefits for America.

Here are five reasons why the United States should cut its emissions in half by 2030:

1. A stronger U.S. emissions-reduction target is achievable and necessary.

The Intergovernmental Panel on Climate Change (IPCC) made it clear that unprecedented action is required to keep global warming below 1.5 degrees C (2.7 degrees F) above pre-industrial levels, the threshold scientists say is necessary for averting the worst impacts of climate change. Achieving that goal requires that global greenhouse gas emissions drop by half by 2030 and reach net-zero around mid-century. The United States bears a significant responsibility as the source of 13% of current global emissions and more cumulative emissions than any other country.

Preliminary estimates show that economy-wide emissions fell by 10.3% between 2019 and 2020, or 21%  between 2005 and 2020. This technically means the United States met its commitment to reduce emissions by 17% below 2005 levels by 2020 under the Copenhagen Accord, and appears to put the country on track to meet its 2025 goal. However, appearances can be deceiving. This decline in 2020 was mostly driven by the COVID-19 lockdowns and economic recession; without a green recovery, emissions will likely rise again as the economy rebounds, putting the United States off-track for achieving its 2025 target.

To ensure emissions do not revert to pre-pandemic levels, the United States must respond to the COVID-19 crisis by investing in clean energy and deploying a whole-of-society approach to tackle the climate crisis. It must tap into the climate leadership of U.S. states, cities and business that proliferated after President Trump withdrew from the Paris Agreement. Today, one in three Americans lives in a jurisdiction committed to 100% clean electricity. In 2017, only Hawaii and 33 cities had committed to 100% clean electricity; now, 13 states, Puerto Rico and 165 cities have 100% clean energy commitments.

The 2019 Accelerating America's Pledge analysis found that the rapid expansion of ambitious actions taken by states and local actors could reduce emissions 37% below 2005 by 2030. An “All-in” strategy that pairs local climate action with aggressive federal engagement could reduce emissions by around 50% by 2030.

The America’s Pledge analysis laid out sector-specific pathways to achieve this level of emissions reductions. Over 60% of the estimated emissions reductions in the “All-in” scenario in 2030 were in the power sector, demonstrating the critical importance of aggressive clean electricity standards at the state and federal level over the next decade. Other sectors such as buildings and transportation, which together accounted for roughly 12% of estimated reductions, require rapid electrification and efficiency efforts for longer-term decarbonization. Finally, curbing non-CO2 emissions, including hydrofluorocarbons (HFCs) and methane, could largely be achieved through existing technology and abatement strategies. These sources account for roughly 17% of emissions reduction potential by the end of the decade. 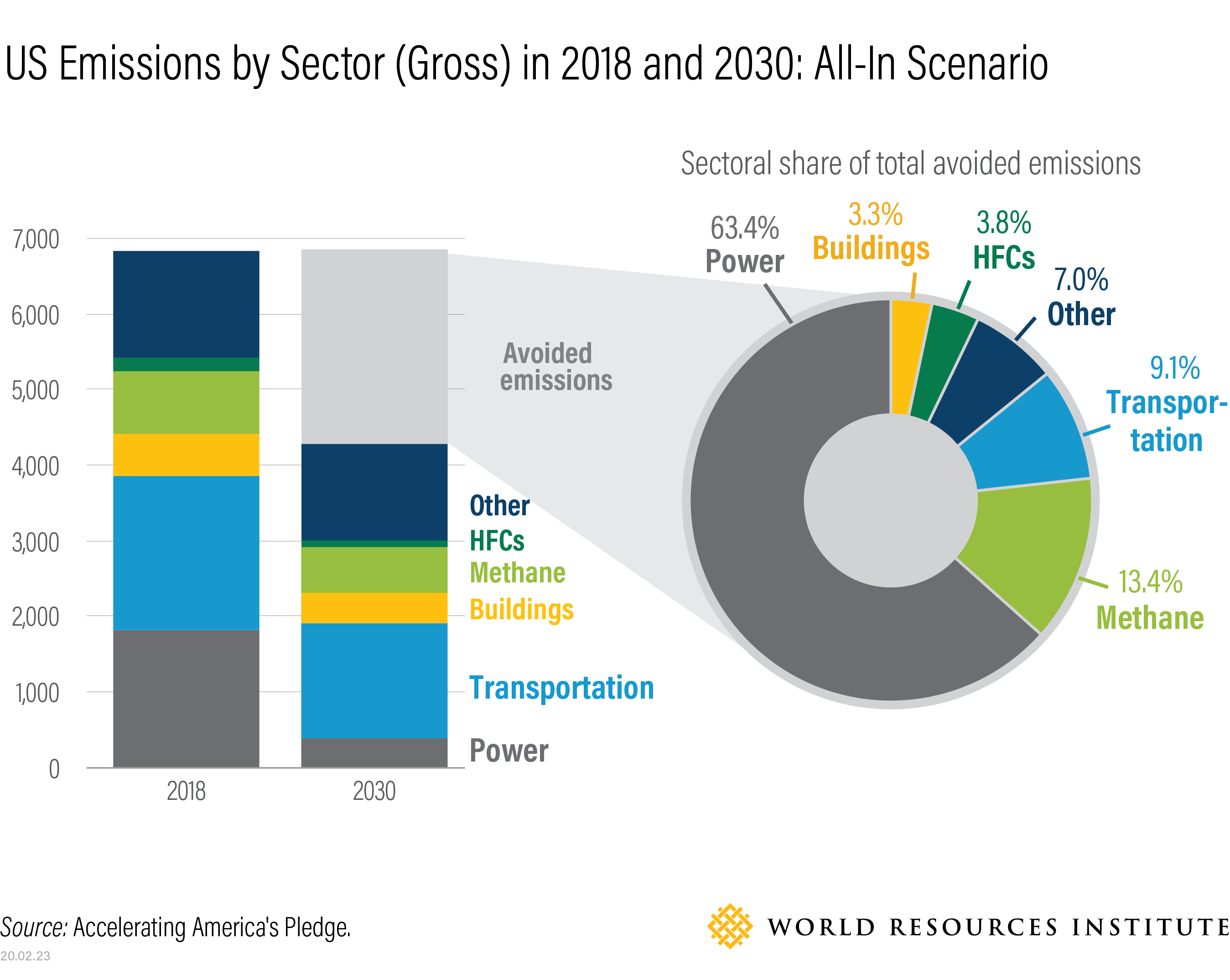 This graph highlights emissions sectors assessed in the America's Pledge analysis. Sources of emissions and sinks from Land Use, Land Use Change, and Forestry (LULUCF) are excluded from these totals. Due to stock and flow constraints, sectors with smaller 2030 emissions reductions — such as buildings and transportation — ramp up reductions significantly after 2030.

Despite the challenges posed by the COVID-19 pandemic, a sector-by-sector assessment by America’s Pledge released last September gives us increased confidence that bottom-up action can achieve rapid emissions reductions.

2. A stronger emissions-reduction target would boost American businesses and support millions of jobs.

According to a recent WRI report on America’s New Climate Economy, the low-carbon transition is an immense opportunity for the U.S. economy. Even now, 41 U.S. states are growing their economies while also reducing their emissions.

In the short-term, clean energy and other green investments associated with a stronger climate commitment and economic recovery can create more jobs than fossil fuels. Currently, wind and solar energy generation provide double the number of jobs as fossil fuel production. Research shows that $1 million spent on renewable energy or energy efficiency in the United States generates more than twice as many jobs in the short- to medium-term as $1 million spent on fossil fuels. The mean hourly wages for clean energy jobs are higher than the national average by 8–19%. Many are available to workers without college degrees, though job security and access to benefits remain important concerns.

In the medium-term, a low-carbon economy will create more than enough jobs to replace those lost in fossil fuel industries. According to a recent analysis, widespread electrification of the economy, which is essential for reducing emissions, will require public investments of about $300 billion per year for 10 years. This could support up to 25 million good-paying jobs over the next 15 years and 5 million sustained jobs by mid-century. Meanwhile, the average household could see up to $2,000 in annual savings on energy costs and better health outcomes. However, executing a just transition for fossil fuel workers must be a deliberate process. There are a number of steps the United States can take, including through economic development programs, innovative financing programs, and the rehabilitation of abandoned mines and orphaned wells.

Most importantly, in the long-term, rapidly reducing emissions will help stave off the economic consequences of unchecked climate change. Without new policies, the annual economic damages from climate change could reach 1-3% of U.S. GDP by the end of the century, with extreme heat, sea level rise and crop yield declines hitting the South and parts of the Midwest the hardest. In the worst-case scenario, the damages could reach 3.7-10% of GDP.

3. An ambitious emissions-reduction target would support economic recovery from COVID-19.

The types of investments that support an ambitious 2030 emissions-reduction target would also support economic recovery after COVID-19. The 2009 recovery efforts revealed two important lessons: 1) major investments in clean energy launched the domestic industry and supported 900,000 jobs; and 2) this investment could have been greener. Only 12% of U.S. spending during the 2009 recovery went to green measures, even though much of the green spending created more jobs than other types of investments. For example, public transit projects resulted in 70% more job-hours than similar spending on highways.  We must learn from history and make win-win investments that create good jobs, jolt the economy to life, reduce climate pollution and improve public health.

WRI’s COVID-19 Recovery Expert Note series includes several recommendations to generate a large number of jobs through targeted investments in electric buses, public transit, energy-efficient buildings, grid infrastructure, and conservation and restoration of natural and working lands. These near-term investments would put communities back to work; reduce pollution in our air and water; and serve as a down payment on the energy transition necessary to cut emissions in half over the next decade.

4. A 50% emissions-reduction target would serve as a north star for greater domestic climate action.

President Biden campaigned on the most ambitious climate platform of any presidential candidate in history. It included achieving net-zero emissions from electricity by 2035 and the full economy by 2050 — a step further than the 80% reduction target in the current U.S. Mid-Century Strategy. He promised near-term goals to reduce emissions from vehicles, buildings and industry. Now as president, his early “climate blitz” and emerging Build Back Better Economic Recovery Plan will make progress along a number of climate action priorities.

In addition, the federal government and private sector have made progress that signals the United States can mobilize toward an ambitious 2030 reduction goal. For example:

An ambitious 2030 goal would anchor and guide the Biden administration’s and Congress’s approach to push further on cleaner forms of energy, zero-emission cars and buildings, healthier forests and improved agricultural practices. For example, it could help drive 100% zero-emission electricity and light-duty vehicle sales, as well as development of all the related grid and charging infrastructure to support them. It could spur strong energy standards for appliances and emissions-performance standards for heavy-emitting industries like cement, steel and plastic. It could also mean innovation in carbon dioxide removal and green hydrogen to create the clean energy technology and careers of the future.

As the world’s second-largest emitter — responsible for 13% of global emissions — the United States must use its position of leadership to encourage greater ambition and faster action by peer nations. A strong emissions-reduction commitment ahead of the Leaders’ Climate Summit can help build momentum for enhanced targets from countries around the world.

This will be particularly critical in the run-up to the COP26 climate summit in Glasgow this November. Strong commitments from China, Japan, South Korea, Canada, India, South Africa and other major emitters will be especially important. Ambitious action from the United States can help persuade them to step up their emissions-reduction targets to be commensurate with the scale of the climate change challenge. A strong U.S. target is also critical for demonstrating credibility, as others like the European Union and UK have already adopted ambitious emissions-reduction targets for 2030 that would go even further than a 50% cut by the United States.

Strong action on emissions should be complemented by the United States delivering on and increasing its financial support to other nations to achieve their climate goals — particularly for developing countries to pursue clean energy, reduce deforestation, and build resilience to climate impacts. Coupled with an ambitious emissions-reduction commitment, finance can help drive further global ambition in the negotiations at COP26.

That means at a minimum fulfilling the outstanding $2 billion pledged in 2014 to the Green Climate Fund (GCF), as Biden has promised to do. The United States should also match the commitments other developed countries made to double their pledges to the GCF, as well as contribute to the Adaptation Fund and Global Environment Facility.

The US Should Not Waste This Second Chance

The United States is officially the only country in the world to join the Paris Agreement twice. A second chance to participate in the greatest collective climate effort in history should also mean double the commitment and twice the ambition.

A more ambitious 2030 emissions-reduction goal reinforces all levels of domestic action on pollution and clean energy. It charts a new course for the U.S. economy that can pull it out of the pandemic-induced recession in ways that make it cleaner and more equitable than before. And it signals that the country that led in the energy of the past will be the leader in the clean energy of the future.

The United States should not waste this second chance, because we have no second Earth.