Every summer, multilateral development banks release their Joint Report on Climate Finance. Together, these public banks provide tens of billions of dollars in loans and grants for climate action, both mitigation and adaptation. The annual lending volumes are of special interest to those tracking how much finance is flowing to developing countries as part of the “grand bargain” underpinning the Paris Agreement.

Oranges to grapefruits: the change in country classification methodology

In this year’s joint climate finance report, MDBs report using the World Bank’s classification system that divides countries into “low-income,” “middle-income,” and “high-income.” This is different to how the UNFCCC defines “developed” and “developing” countries, which previous years’ reports broadly aligned with.

Data from the AfDB, ADB and IDBG are not particularly affected by the change, since they only provide finance to developing countries under the UNFCCC definition. Figures from the EBRD, EIB, and World Bank Group vary because they provide finance to some countries considered developed according to the UNFCCC, causing a nearly $5 billion discrepancy. 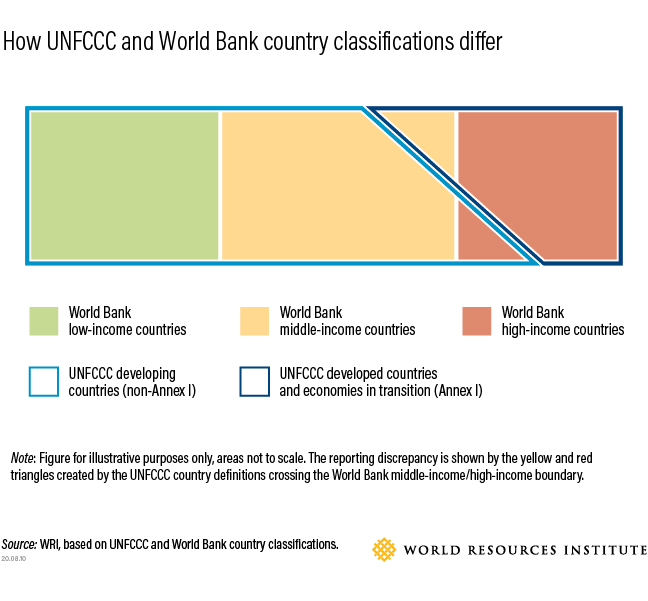 As we have every year for the past three years (see 2016, 2017, 2018 editions), we bring you an analysis of the report that goes beyond the headlines and pulls out key insights – what we have called, “the good, the bad and the urgent.”

In the latest report, covering 2019, multilateral development banks (MDBs) changed how they report their climate finance. For the first time, the report includes figures on climate finance to all countries, not just to developing countries as in previous editions, and a change to the way they classify countries (see box). This provides some useful insights, but it also makes it more difficult to assess how MDB climate finance contributes toward the UN Framework Convention on Climate Change (UNFCCC) goal, due this year, of mobilizing $100 billion annually for developing countries.

Using supplementary data from MDBs, we were able to adjust some of the figures to more closely align with the UNFCCC’s categorization of developing countries, but even then, the 2019 figures are not fully comparable with those from 2018 and earlier. Not quite as bad as an apples and oranges comparison, but perhaps oranges and grapefruits.

The report shows that 2019 was a strong year for MDB climate finance, with most banks meeting their targets early, adaptation finance continuing to increase and the Asian Infrastructure Investment Bank (AIIB) joining the reporting exercise. However, the rate of growth of climate finance is slowing overall at a time when it needs to continue growing to meet the $100 billion target by 2020.

Here are our main takeaways:

Climate finance from the MDBs to developing countries continued to grow.

Most MDBs appear to have met their internal climate finance targets for 2020. 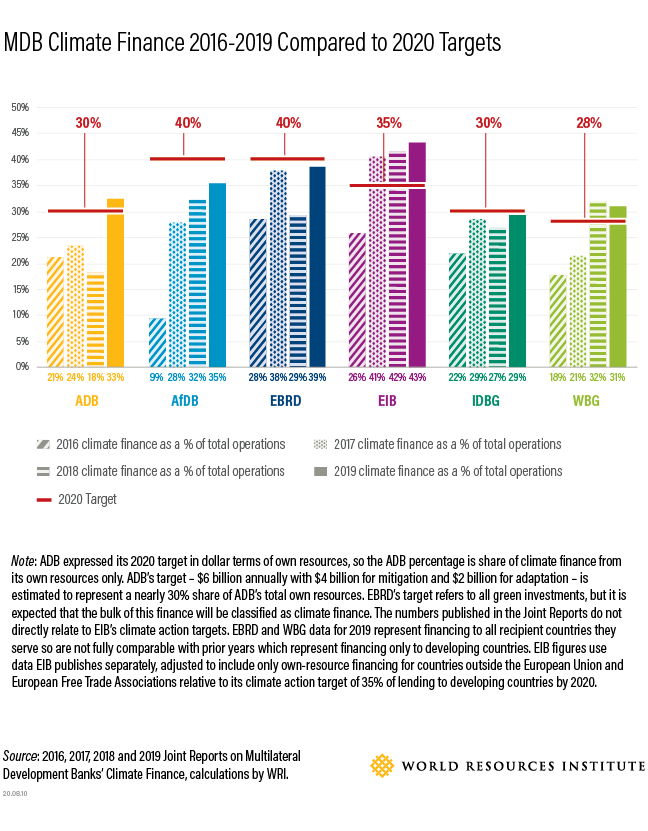 AIIB reported climate finance numbers for the first time as part of the joint group of MDBs.

The Beijing-based multilateral bank reported $1.7 billion in 2019 climate finance, placing it among the leading MDBs in terms of its share of its total funding going to climate change, at 39%. AIIB’s participation in joint climate finance reporting is an important step toward greater transparency and accountability. AIIB follows the Islamic Development Bank (IsDB), which started reporting its climate finance in 2018, and reported $466 million in climate finance in 2019, a quarter of its total financing. The New Development Bank, created by the BRICS countries (Brazil, Russia, India, China and South Africa) is now the only major MDB not reporting through this channel; it should consider doing so next year.

The ADB’s adaptation finance is just over a fifth of its total climate finance, and at $1.5 billion in 2019 it is still some way off meeting its 2020 sub-target of $2bn a year for adaptation. Given major and growing adaptation needs in Asia and Europe, this needs urgent attention. 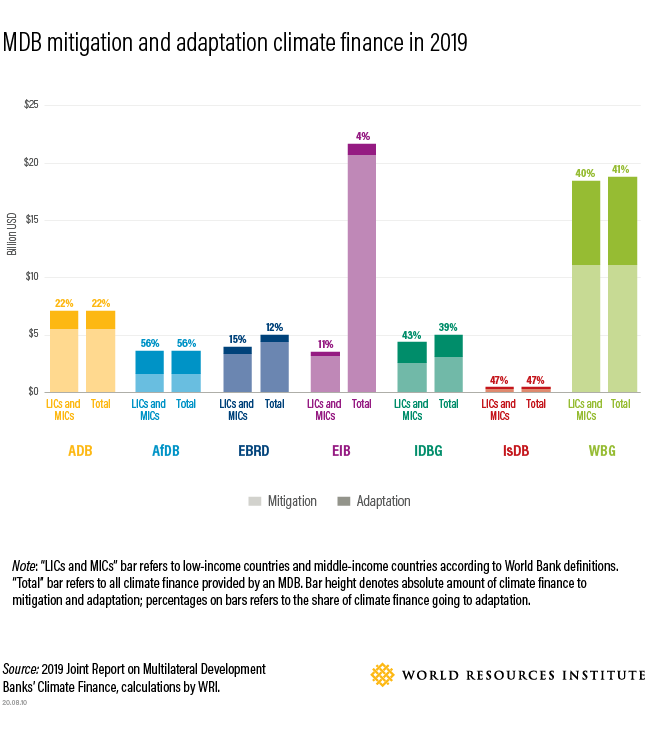 Growth in MDB climate finance appears to be slowing.

The MDBs mobilized less than $1 from the private sector for every $1 of MDB climate finance.

We covered this issue last year, and the new data suggests this discouraging trend continues. Over the past five years, the MDBs’ “Billions to Trillions” agenda has emphasized using billions in public funding to mobilize trillions in private investment to meet development finance needs. Yet only the AfDB was able to attract more than a dollar of private investment for each dollar invested in climate activities in low- and middle-income countries.

MDBs are generally more successful at mobilizing other public dollars, rather than private ones. It’s time for MDBs to reevaluate the “Billions to Trillions” agenda and explore whether other approaches may be more effective at promoting private investment in climate action. 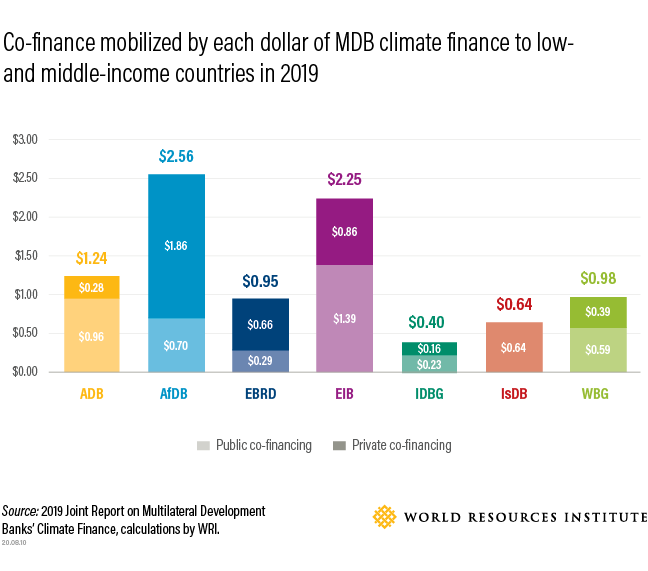 MDBs’ change in their reporting approach is misaligned with UNFCCC country classifications, creating confusion. The funding developed countries provide through MDBs makes a major contribution to meeting their commitment to mobilize $100 billion annually in climate finance and using the UNFCCC definition of developing countries is necessary for assessing progress towards this goal.

The desire for greater accuracy in climate finance reporting is laudable, and the debate on how to define developing countries for the purposes of international climate policy is worth having. But when tracking longer-term trends, improved accuracy must be balanced with consistency.

Categorizing data according to country income groups is undoubtedly useful and should be continued, but it’s no substitute for reporting according to the UNFCCC definition of developing countries, which should be reinstated. Many stakeholders would like to see both kinds of reporting side by side.

The report covers 2019, before the COVID-19 pandemic struck. Since then, all development finance institutions have focused their financial firepower on combatting the health and economic crises.

With the MDBs frontloading resources and channeling them into health and recovery activities, it is very likely that 2020 climate finance flows as a share of total MDB operations, and potentially also in absolute terms, will drop.

Yet, the climate crisis is still with us, so MDBs should incorporate, wherever possible, activities that address the COVID crisis but also have significant climate co-benefits. MDBs have produced some useful resources on how to ensure a green recovery, and longer-term recovery funding must be aligned with the Paris Agreement.

EBRD and NDB should adopt post-2020 climate finance targets, and other MDBs should reaffirm their existing commitments, while taking into account the ways COVID-19 has changed the climate and development landscape.

Stay focused on the alignment roadmap.

Alongside climate-specific targets, MDBs are working on a joint approach for aligning all their activities with the Paris Agreement. This work is very important to guide the future evolution of the MDBs’ portfolios.

Together with Germanwatch and the NewClimate Institute, WRI recently produced a series of memos on how the MDBs can deliver on their Paris alignment commitment. The Finance in Common Summit of public development banks on November 10-12 this year will be a good opportunity for MDBs to unveil their joint approach to Paris Alignment as well as to (re)announce their individual post-2020 climate finance targets.

Strengthen how MDBs report on mitigation.

MDBs are currently updating their Common Principles for Climate Mitigation Finance Tracking, which set the rules on what they can count as mitigation finance in the joint reports.

Some of the criteria need to be updated, especially since the current iteration of the methodology was published before the Paris Agreement. But the banks should be careful not to create loopholes for counting high-emissions activities as mitigation finance – this would undermine the credibility of the joint climate finance reports.

The updated methodology should be clear and unequivocal that activities not aligned with the Paris Agreement’s long-term goals, such as those that lock-in fossil fuel dependence, should not be counted as mitigation finance.

This blog has been corrected to reflect that IsDB reported $466 million in climate finance in 2019, rather than $466 billion.