In late December 2019, the U.S. Congress passed funding bills for fiscal year 2020. Prior to 2017, the U.S. had been one of the largest contributors of climate finance, but with the Trump administration being particularly hostile to both foreign aid and climate action, it has suffered cutbacks. This is the first full budget cycle since the Democrats won a majority in the House of the Representatives in 2018, while the Republicans maintain a majority in the Senate.

The fiscal 2020 spending bill suggests growing bipartisan consensus around the value of international climate assistance. Despite the Trump administration's efforts, Congress has preserved funding for many key budget lines. However, the amounts appropriated remain lower than spending under the Obama administration and fall short of the scale needed to address the climate challenge. Funding for international climate action is important to help poorer countries to reduce greenhouse gas emissions, which will be key to ensure global emissions reach net zero by mid-century. Many developing countries are setting ambitious climate targets but lack the financing necessary to deliver them. Support from the U.S. can close investment gaps and help mobilize far greater sums from the private sector. This support also helps vulnerable communities to improve their resilience to the impacts of climate change, critical for their development, but also an investment in maintaining international peace and security.

A rapid scale up of investment in climate action is urgently needed, and public finance plays a key role. As we did for the past two years, here's a breakdown of how the latest funding bill supports international climate action, and what more is needed.

$806 million in bilateral allocations for environmental programs addressing biodiversity protection, sustainable forestry, renewable energy and adaptation. The Development Assistance and Economic Support Fund accounts are the two major budget lines that finance U.S. bilateral development work, which is primarily carried out by the State Department and U.S. Agency for International Development. While Congress increased funding allotted to the Development Assistance account, it cut the allocation to the Economic Support Fund, meaning a net reduction in total funding available for non-health development work. Despite this unfortunate cut in development funding, Congress directed that at least $806 million from these accounts be used for environmental objectives, including biodiversity protection, sustainable forestry, renewable energy and adaptation, a $40 million increase compared to the previous year. In addition, the renewable energy and adaptation allocations were new budget lines in the fiscal 2020 bill. Given the Trump administration's reluctance to voluntarily finance these kinds of activities, these new budget lines are an important step forward. They provide a clear Congressional directive to the Executive branch that money must be spent on these areas and increase the likelihood that these allocations will continue in future years. 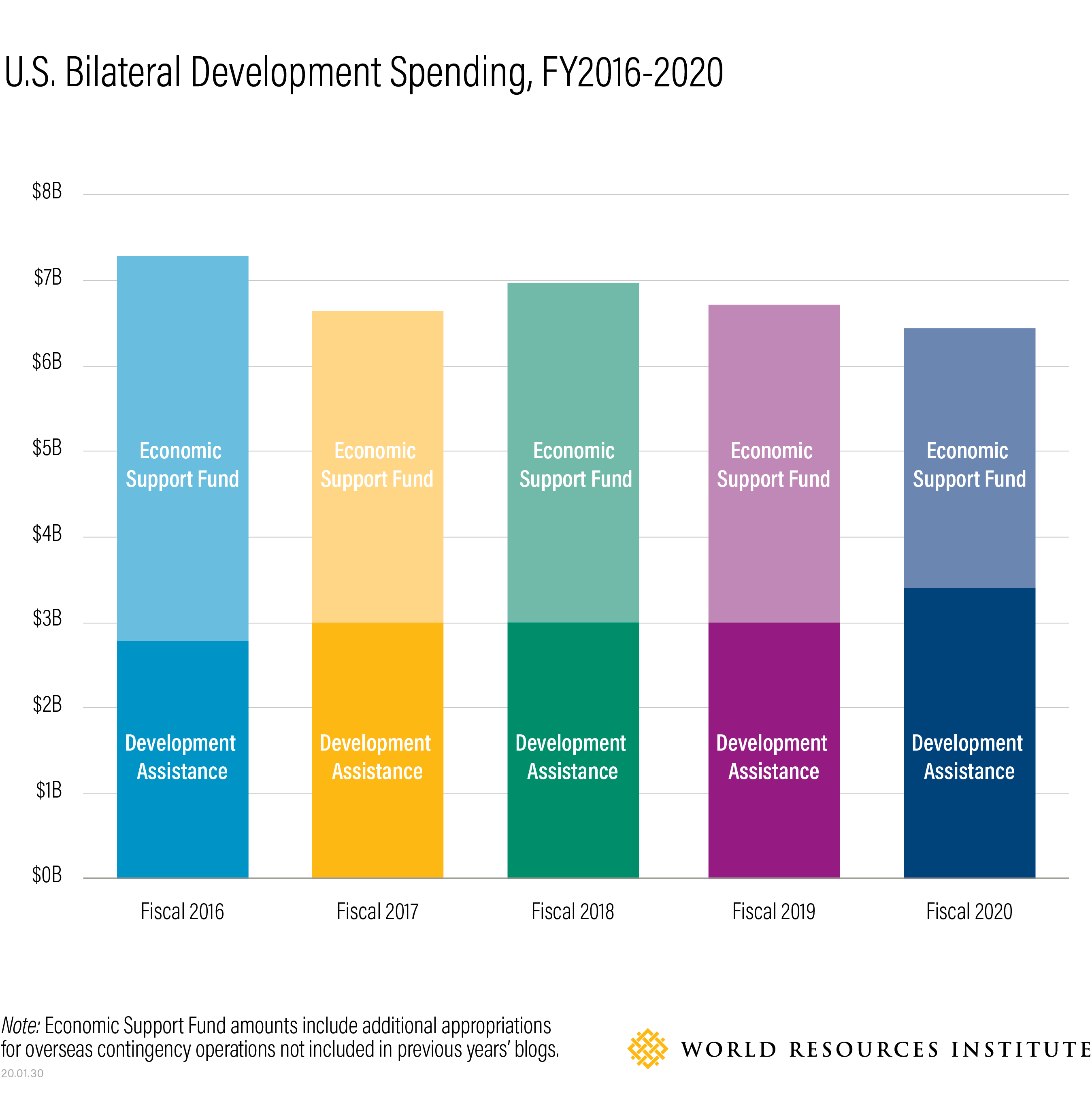 $140 million for the Global Environment Facility. Congress again rejected an administration push to halve the budget of the Global Environment Facility (GEF), which supports a wide variety of environmental projects in developing countries and has enjoyed strong bipartisan support for over a quarter of a century. This means that the U.S. will continue to be a top contributor and that, contrary to fears, funding for the GEF is being maintained at the same level as 2014-2018.

$1.5 billion for multilateral development banks. Multilateral development banks, such as the Inter-American Development Bank and the African Development Bank, are key players in the climate finance landscape, providing a combined $43 billion in climate finance in 2018. The U.S. is a major shareholder in and capital provider to MDBs, and in fiscal 2020 raised its overall support by $174 million, primarily through increased funding for the International Bank for Reconstruction and Development, the World Bank division that works in middle-income countries. This was a payment towards an overall capital increase negotiated in 2018, and was one area where Trump, the House and the Senate were in complete agreement on funding levels.

$6.4 million for the Intergovernmental Panel on Climate Change (IPCC) and the UN Framework Convention on Climate Change (UNFCCC). For most of the past two decades, the U.S. had been a reliable and major contributor to these UN bodies that work on climate science and negotiations, providing around two-fifths of the IPCC's total budget and a fifth of the UNFCCC's. In the last three years Congress did not allocate funding from the International Organizations and Programs account to these entities, with other countries and private foundations stepping up to fill the gap. In a positive development, the fiscal 2020 bill allocates $6.4 million to the UNFCCC and IPCC. While less than the $10 million a year the U.S. provided until fiscal 2016, it could be topped up with some of the $10.6 million allocated for UN Environmental Programs. Ideally, the fiscal 2021 bill will restore full funding to these vital bodies. 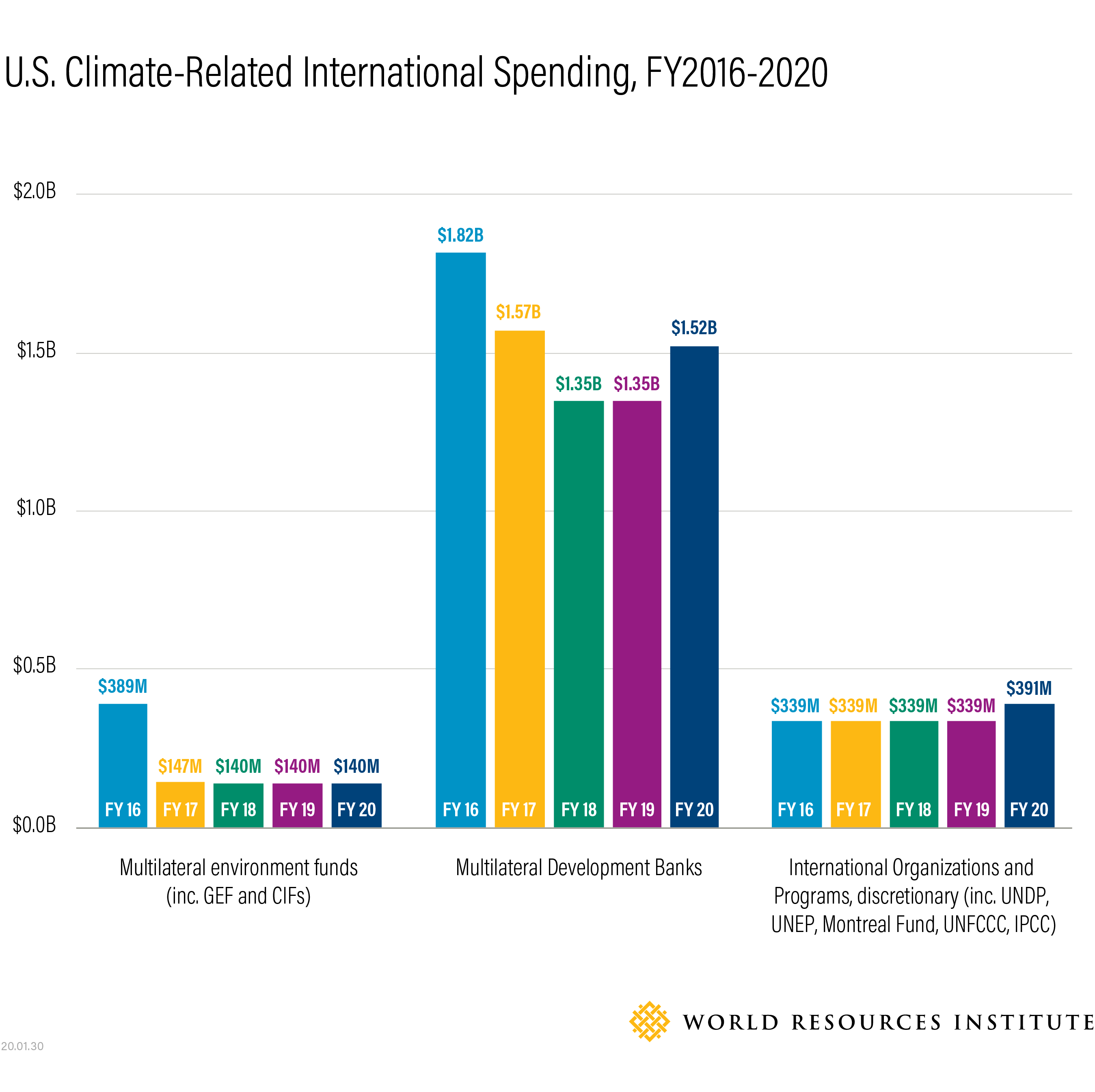 No funding for the Green Climate Fund. The GCF is the world's largest international fund dedicated to addressing climate change. It plays an important role in financing transformational projects and is viewed by many developing countries as a bellwether of rich countries' commitment to international cooperation on climate. However, Trump cited the GCF as a key reason for pulling out of the Paris Agreement. In the fiscal 2020 bill, Congress removed language from previous years' bills prohibiting contributions to the GCF, a positive move that paves the way for a future allocation, but stopped short of committing money this year. Last year, the Green Climate Fund saw $9.7 billion in pledges from 28 countries to its first replenishment. 13 countries, including major economies such as the UK, Germany, France, and South Korea, doubled their contributions while the U.S. was conspicuously absent.

Advocates of climate finance in Congress have spent the last three years on the defensive, working to maintain current levels of spending. But a rapid scale up of investment in climate action is urgently needed.

2020 is the year developed countries must meet their collective goal to mobilize $100 billion in climate finance for developing countries. Recent reports show meeting the target is still possible but make clear that more effort is needed by all contributors. After an acrimonious COP 25 negotiation round in December, trust is in short supply and there is a need for rich countries to step up and rebuild bridges in order to unlock greater ambition in international climate negotiations.

Going beyond their successful efforts to preserve existing funding, Congress now needs to work to scale up U.S. climate finance, including by resuming contributions to the Green Climate Fund. Such support is critical to the United States' international influence on climate and, done well, can efficiently catalyze greater action in the fight to tackle climate change.