May 23, 2017 By Joe Thwaites
Commentary
Topic
Finance
More on
More on

Today, President Donald Trump released his budget request for fiscal 2018, which begins October 1, 2017. It adds detail to his administration’s spending priorities, set out in a budget blueprint in March (the “skinny budget”), which proposed drastic cuts to most federal agencies and discretionary spending, except for the military and national security.

The blueprint made clear that international climate finance – U.S. support for developing countries to tackle the causes and consequences of climate change – was in the crosshairs, and that was confirmed in the full budget request. The bottom line is clear: the White House is asking Congress to make draconian and senseless cuts to climate finance that will undermine U.S. economic, diplomatic and security interests around the world.

The administration proposes to eliminate the $2.9 billion per year Development Assistance (DA) account entirely, which provided reliable year-to-year funding not just for climate programs but also other vital development priorities, including agriculture and nutrition, education and gender equality. The budget eliminates the self-standing DA account and merges it with the more flexible Economic Support Fund (ESF) account, to create a new Economic Support and Development Fund. It also imposes a very large cut; the amount requested is less than half the combined appropriation to ESF and DA in fiscal 2016. In other words, the amount requested translates effectively into the zeroing out of the DA account. Also, because the new merged fund will be flexible (it can be allocated at the discretion of the State Department based on short-term priorities or political interests), it significantly reduces resources for development and climate projects requiring stable, reliable funding streams.

The budget also eliminates funding for the Overseas Private Investment Corporation (OPIC) to issue new loans, guarantees and insurance to mobilize private investment for international development. OPIC is responsible for a significant proportion of U.S. overseas climate funding, committing around $1 billion a year for renewable energy projects. What’s more, because companies pay OPIC for its financial products, it operates at no net cost to taxpayers and has generated $2.1 billion for the U.S. Treasury since 2010. To cut a program that is helping reduce the deficit while supporting renewable energy defies logic.

On the campaign trail, Trump pledged to cancel payments to “UN climate change programs.” Multilateral climate funds support a wide variety of climate actions, and benefit not just recipient countries’ development, but U.S. exports and national security. The budget request includes no funding for the Green Climate Fund (GCF), the biggest of the climate-specific multilateral funds (though not actually a UN program; while it receives guidance from the international community through the UN climate convention, it is a legally independent entity with the authority to make its own funding decisions). Obama pledged $3 billion to the GCF in 2014, making the U.S. the single largest pledger. However, he was only able to deliver $1 billion before the end of his term; if no further payments are made, the United States risks falling to fifth-largest contributor.

The only multilateral environmental fund that would be funded under Trump’s budget is the Global Environment Facility (GEF); but this has been cut back by 30 percent compared to fiscal 2017 levels. The GEF has enjoyed 25 years of bipartisan support, and it funds many key environmental areas, including conservation, biodiversity and anti-wildlife trafficking efforts.

While climate-specific funds are an important part of climate finance, multilateral development banks (MDBs) are far larger in terms of financial flows, approving billions of dollars each year. In 2015, MDBs provided $25 billion in climate finance , and their scaled-up funding will be a key component towards meeting the goal to mobilize $100 billion a year for developing countries by 2020. Trump’s budget proposes a 26 percent cut to U.S. funding for MDBs compared to fiscal 2016 spending levels.

The budget eliminates discretionary funding to international organizations, which amounted to $339 million in fiscal 2017. This would mean cutting $137.5 million from the UN Children’s Fund (UNICEF), $80 million from the UN Development Programme and $10.5 million from the UN High Commissioner for Human Rights. This is an extreme attack on the post-World War II system of global governance. Some treaties commit the U.S. and other member countries to pay an assessed contribution, and $900 million is requested for this, still a 33 percent cut from fiscal 2016 levels.

The cuts include defunding the Intergovernmental Panel on Climate Change, the scientific body responsible for synthesizing climate science for use by policymakers the world over, and the UN Framework Convention on Climate Change, the negotiating process which created the groundbreaking Paris Agreement. Congress failed to fund these institutions in the fiscal 2017 spending bill passed last month. These developments are a radical departure; the amounts are modest, around $10 million a year, and the United States has contributed to the IPCC’s budget since its creation in 1988 with bipartisan support.

Cuts to other climate-related agencies include $32 million to the Montreal Protocol Multilateral Fund, which supports countries in reducing ozone-depleting chemicals (some of which are potent greenhouse gases), $7 million to the UN Environment Programme, and $1 million to the World Meteorological Organization. 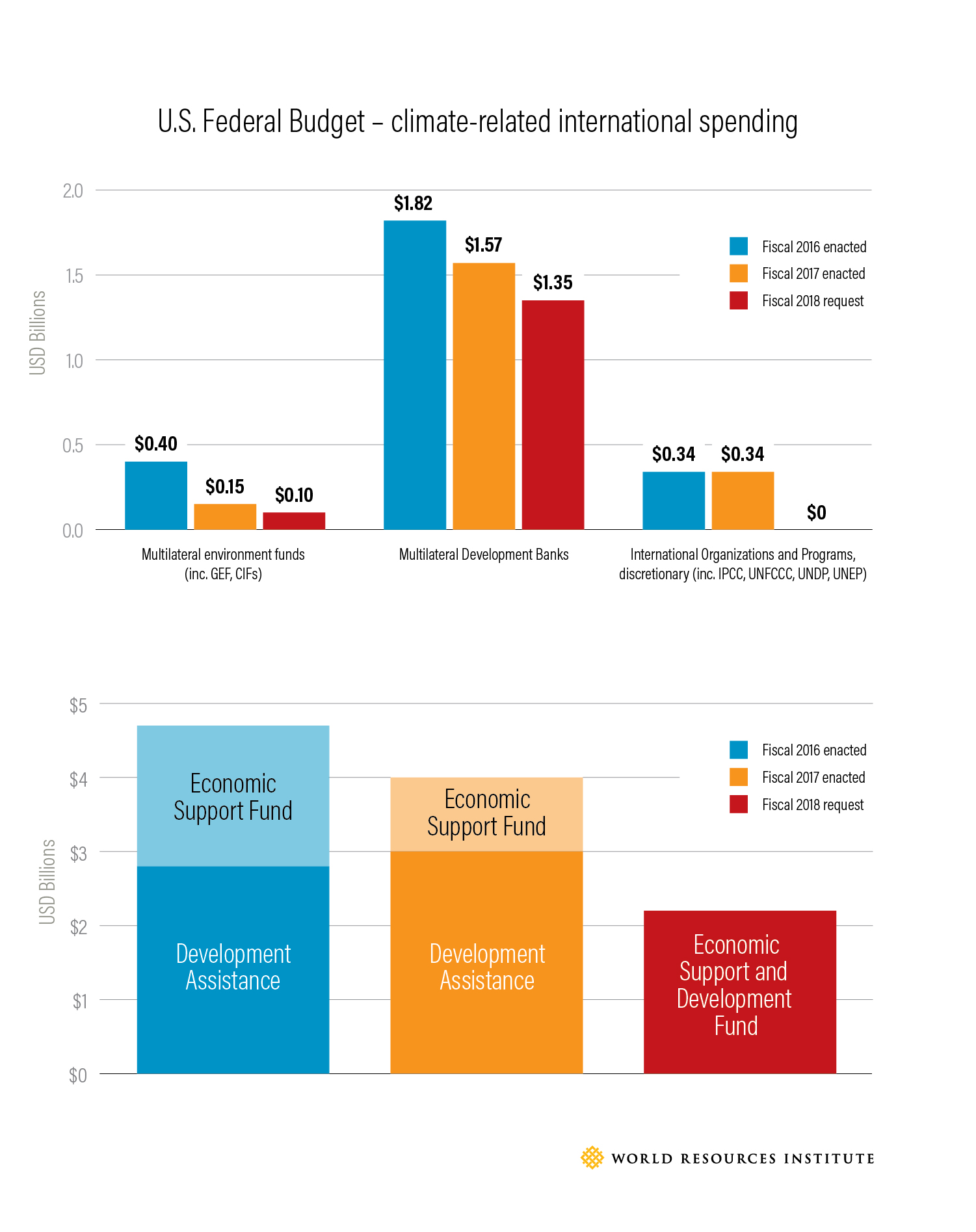 Nearly every possible funding item that could support international climate action has been identified and cut. But the administration has gone further, with accompanying language in the request making it clear they have no intention of contributing climate finance in future years. This amplifies the diplomatic damage to the climate finance architecture. It also weakens American credibility and leverage in many important multilateral forums, making it harder for the United States to shape outcomes and protect its interests.

The budget request now heads to Congress, where an appropriation bill must be passed by the end of September. To preserve America’s security and global influence, and to support the world’s poorest and most vulnerable countries, it is critical that lawmakers restore and protect funding for these vital programs.

2020 Budget Shows Progress on Climate Finance, But US Continues to Fall Behind Peers

US 2018 Budget and Climate Finance: It's Bad, but Not As Bad As You Might Think