If solving the climate change problem seems hard now, just think about how hard it would be without the tremendous carbon sink that lands provide. Trees and other vegetation suck up carbon dioxide from the atmosphere, sequestering nearly a third of global emissions. Given how quickly the world has been blowing through its carbon budget—the amount of greenhouse gases we can emit while still keeping temperature rise to 1.5 degrees C—we will need to both maintain the existing sink and enhance its ability to suck up more carbon.

The Intergovernmental Panel on Climate Change (IPCC) has now weighed in on the promise and perils of enhancing land’s ability to absorb carbon through its Special Report on Climate Change and Land. This is an important development, as the scientific community has established that limiting warming to 1.5 degrees C will require removing carbon from the atmosphere in addition to reducing emissions. Carbon removal can happen via land-based approaches, such as enhancing soil’s ability to sequester carbon, and through technological approaches, such as direct air capture and storage (DACS). While the IPCC found there could be significant benefits to land-based carbon removal, if deployed incorrectly, these strategies could create greater pressures on land and compromise food security and ecosystem health.

Reforestation is converting previously forested land back into forest. Afforestation, on the other hand, is planting forests on lands where they did not previously grow. The IPCC found that the potential for afforestation/reforestation is 0.5–10.1 gigatonnes of greenhouse gases (GtCO2-eq) per year, with the top of the range equivalent to China’s emissions in 2010). The upper end of the range assumes reforesting all grazing lands.

For a deeper dive into the IPCC special report on land, check out our other blog posts:

Reforestation can have many benefits beyond carbon removal, including providing habitat, enhancing soil fertility, controlling floods, and improving air and water quality. But it also comes with risks, depending on the type of trees planted and the state of the landscape the forest displaces. The report found that if afforestation is implemented on a large scale, it could compete with other land uses and threaten food security, water resources and biodiversity. These considerations are not always taken into account in climate models. For example, the report notes that in stringent climate modeling scenarios, forest area increases about 25% on average in 2050 to almost 50% in 2100 relative to today’s levels.

Since the Industrial Revolution, we have altered ecosystems and depleted the carbon found in soils. There is accordingly a tremendous opportunity to increase the soil carbon storage that has been lost. The IPCC found that the potential for soil carbon sequestration in croplands and grasslands is 0.4-8.6 GtCO2-eq per year, with the top end of the range equivalent to almost 1.5 times the annual emissions of the United States. The wide range in this estimate reflects persistent scientific uncertainty relating to the efficacy of practices that build soil carbon. Reaching the gigaton scale would also require shifting land management practices across many millions of individual land holders globally.

Ways to enhance soil’s carbon uptake include using plant varieties that have deeper roots, agroforestry, adding organic materials, and changing crop rotations, among others. The potential for this strategy is location-specific, depending on the soil type, prior and current land management practices, environmental conditions and other factors.

Enhancing soil carbon can yield significant co-benefits, including improved soil health and increased yields. However, like in forest carbon management, soil can reach its carbon saturation point in a matter of decades. And the report notes that higher levels of warming could compromise soil’s ability to absorb carbon.

BECCS is the process of burning biomass for energy and then capturing and storing the carbon before it is released back into the atmosphere. While many climate models rely heavily on BECCS, the IPCC’s report and many other studies raise numerous red flags about its large-scale deployment. Growing plants specifically for bioenergy can require a large amount of land, which could lead to greater pressures on land and competition with other land uses. Using land for bioenergy can displace food or fiber production, disrupt ecosystems and raise food prices. If forests are cleared or water and fertilizer use increased to grow bioenergy crops, BECCS can be counterproductive for other sustainability goals.

The report finds that climate models require 109-990 million hectares of land for BECCS, with most averaging around 380-700 million hectares. To put this in context, the entire global area dedicated to growing crops was 1.6 billion hectares in 2010. That means we’d have to expand the land area for BECCS around 24 million hectares per year, about 7 times the global rate of expansion for soybean and sugarcane combined! The IPCC finds that the potential for BECCS is 0.4–11.3 GtCO2-eq per year, but that range could narrow to 0.5 to 5 GtCO2e per year when sustainability goals are taken into account. And estimates may not accurately account for biofuels. While the potential for BECCS is not zero—there are ways to pursue it prudently, such as by using feedstocks like agricultural waste, which would not compete with other land uses—the world will not be able to rely on it as much as most models suggest. And the modeling scenarios that don’t rely on BECCS require much more rapid emissions reductions in the near-term and more carbon removal through other means, such as through afforestation. 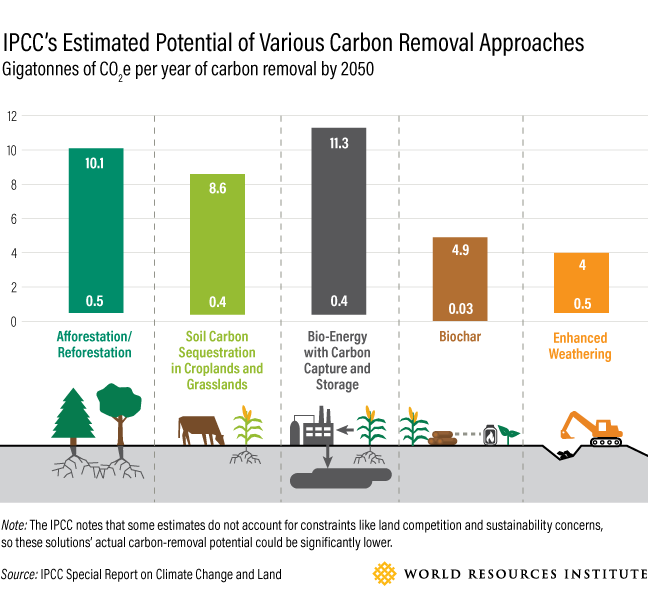 Biochar involves burning biomass in an oxygen-limited environment in a process known as pyrolysis, producing a more stable form of carbon. The resulting biochar can then be applied to soils. The IPCC found that biochar can have large co-benefits, such as adding nutrients to depleted soils and increasing soil’s carbon stocks. There is a risk, however, that without adequate safeguards, land used to provide feedstocks for biochar could increase competition for land. To date, experience with large-scale application of biochar has been limited.

The report found the global carbon removal potential for biochar to be 0.03-4.9 GtCO2 per year by 2050. Factoring in sustainability concerns, the upper end of the range drops to 1-2 GtCO2e per year.

Enhanced weathering is a process that accelerates the natural reaction between carbon dioxide and reactive sources, such as certain types of rocks, to increase carbon uptake. The carbonates or bicarbonates created can then be applied to soil, and in some cases can contribute to food production by replenishing nutrients and increasing soil pH. The IPCC estimated that its potential is 0.5–4.0 GtCO2 per year.

Still, it’s clear that the world can’t remove all the carbon it needs to through land-based options alone. We’ll also need to rapidly scale up technological approaches to carbon removal, such as direct air capture and storage. Furthermore, the report further confirms that we cannot take any pressure off of reducing emissions from all sectors, including energy and transport, or we will need to rely ever more heavily on land solutions, exacerbating food and environmental pressures. And we’ll need to do all of this while safeguarding the world’s carbon sink by halting deforestation and land degradation.

With every year we delay action, our choices to stop dangerous climate change will become ever more limited.