Carbon emissions are at an all-time high. Last month was the hottest on record. U.N. Secretary-General Antonio Guterres is asking countries to get serious about addressing this accelerating crisis. “Beautiful speeches are not enough,” he emphasized at a recent press conference. What we need from governments, business and civil society is “bold action and much greater ambition.”

At the UN’s Latin America and Caribbean Climate Week (LACCW) taking place this week in Salvador, Brazil, attendees have an opportunity to respond to this urgent call. The event brings together policymakers and other stakeholders throughout the region to advance climate action ahead of the global UN Climate Action Summit in New York on September 23rd. One of the ways Latin American and Caribbean countries can show they’re serious is by enhancing their national commitments under the Paris Agreement and committing to bring their emissions to net-zero by 2050.

Temperatures in parts of Latin America and the Caribbean are expected to rise between 2 degrees C and 3 degrees C by 2050, and between 2.5 degrees C and 4.5 degrees C by century’s end. The resulting deterioration of ecosystems, extreme weather events and loss of biodiversity will have major implications for economies and social well-being. The region got a taste of the impacts to come just two years ago, when, in the span of one month,  hurricanes Irma and María hit several Caribbean islands, leaving in their wake thousands of deaths and billions of dollars in losses. Some economies and communities still haven’t fully recovered.

Advancing strong climate policy isn’t just about preventing catastrophes, though. Acting now can generate considerable economic and social benefits. Research from the Global Commission on the Economy and Climate found that the world could reap $26 trillion in net economic benefits between now and 2030 by taking bold climate action. Recent WRI analysis found that Mexico could save close to 26,000 lives and reduce public spending by $5 billion by aggressively reducing air pollution and greenhouse gas emissions. Our report identified 21 policy levers that could cost-effectively achieve Mexico’s commitment to reduce its emissions 22% below business-as-usual by 2030. In short, stronger climate action would pay for itself—not to mention vastly improve citizens’ quality-of-life by reducing air pollution, improving health and more.

We’re starting to see some Latin American and Caribbean countries waking up to the need for strong climate action. Under the leadership of President Carlos Alvarado Quesada, Costa Rica adopted a plan this year to achieve a net-zero emissions economy by 2050, and has committed to strengthen its national climate commitment (known as a nationally determined contribution, or NDC) by 2020. It is already demonstrating the viability of clean energy, with 99.5% of its electricity coming from renewable sources this year. Chile has announced its intention to become carbon-neutral by 2050, phase out coal by 2040, and update its NDC. (Watch WRI’s recent webinar to find out more about Chile’s plan and the global state of play for long-term emissions-reduction strategies).

Chile and Costa Rica’s plans are in line with the UN Secretary General’s recent letter to heads-of-state to announce plans for carbon-neutrality by 2050 and put forward new commitments under the Paris Agreement next year, but the rest of the region has not yet similarly stepped up. So far, Mexico is the only country in Latin America and the Caribbean with an official “long-term low greenhouse gas emissions development strategy” to the UN detailing its emissions-reduction goals through 2050. The latest climate science shows that the world will need to reduce carbon dioxide emissions by 45% by 2030 and to zero by 2050; Mexico’s long-term strategy only calls for a 50% greenhouse gas emissions reduction between 2000 and 2050.

Costa Rica, Colombia, Ecuador, Peru, Brazil, Chile and Argentina have announced that they are working on long-term emissions-reduction strategies, but they have yet to formally submit them to the UN. These strategies will need to set net-zero targets to align with what the climate science says is necessary for preventing the most dangerous impacts. 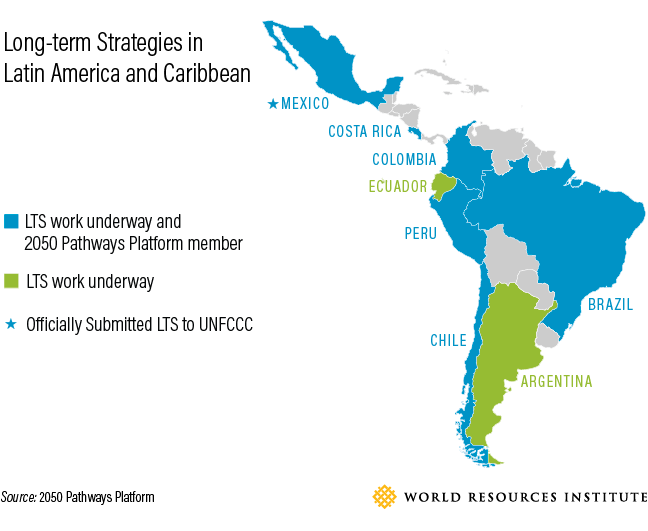 Boosting Climate Action in Latin America and the Caribbean

Latin America and the Caribbean are critically important in the global battle against climate change, especially because the region holds the world’s largest tropical rainforest, a critical carbon sink. At the same time, many countries in the region are especially vulnerable to the threats climate change poses—from sea level rise to floods to increasingly violent storms.

Now is the time for nations to lay out a comprehensive vision for a future that is sustainable for everyone. Otherwise, we risk losing an historic opportunity for Latin America and the Caribbean.