Since famine ravaged Ethiopia in the 1980s, the country has consistently received humanitarian aid from foreign governments and NGOs. Now, it’s the world’s fastest-growing economy, attracting international investors and developers keen on boosting the country’s GDP. But those interested in Ethiopia’s future prosperity should also be looking further afield: to the Congo Basin rainforest.

Stretching across Central Africa, the Congo Basin is home to 80 million people who depend on it for everything from food to charcoal to medicinal plants. But they aren’t the only ones; the world’s second-largest rainforest also plays a role in regulating rainfall patterns across other parts of the continent. Its continued disappearance could exacerbate insecurity of freshwater and food supplies for some of Africa’s most vulnerable populations. 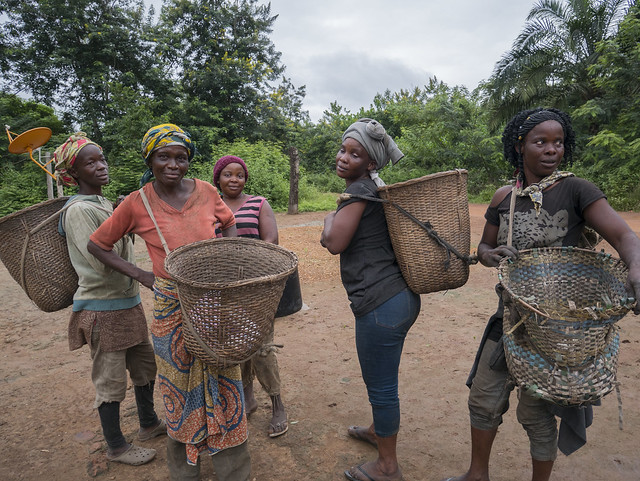 Villagers like these in the Republic of Congo rely on Congo Basin forests for food and livelihoods. Photo by Molly Bergen/WRI

Deforestation rates in the Congo Basin — historically lower than in the Amazon and southeast Asia — are on the rise, particularly in the Democratic Republic of Congo (DRC). The DRC lost the second-largest area of tropical primary forest of any country on Earth (after Brazil) in 2018, according to data on Global Forest Watch. This loss is significant considering that its main direct driver is relatively small-scale: slash-and-burn farming that is usually done with axes, not machinery. In a recent paper, University of Maryland researchers suggested that at the current rate of tree cover loss, the DRC’s primary forests could be completely razed by 2100.

This isn’t just a problem for the trees. Studies show that tropical rainforests worldwide help regulate rainfall patterns by recycling moisture through the atmosphere and keeping surface temperatures lower than in non-forested areas. The Congo Basin is a major source of rainfall in the Sahel region; research indicates that air produces twice as much rain after passing over land covered with extensive tropical vegetation.

Meanwhile, nearby areas such as the Horn of Africa are becoming increasingly dry. Recent droughts in Ethiopia and Somalia have led millions to depend on emergency food and water rations. While there are numerous factors believed to have intensified these extreme weather conditions — including El Niño and climate change — deforestation within and adjacent to these countries is an important one.

Continued deforestation could spur more crises. Research summarized in a recent WRI working paper shows that large-scale deforestation in any of the planet’s three major tropical forest zones (the Amazon, the Congo Basin and southeast Asia) would leave the climate on their respective continents warmer and drier. 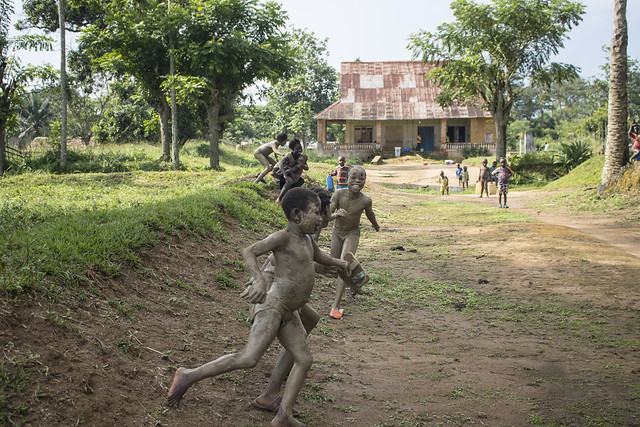 Children play in the mud after a rainstorm in Monkoto, Democratic Republic of Congo. Photo by Molly Bergen/WRI

WRI’s work in Africa aims to tackle environmental challenges including forest loss, water risk, food insecurity and livelihoods through a range of integrated approaches, such as:

While current research has provided a glimpse at the role of Africa’s rainforests on the global hydrological cycle, most research focuses on the Amazon. For example, a recent study suggests that deforestation of 20–25% of the Amazon’s existing forests would be the tipping point beyond which the forest would cease to be a functioning rainforest ecosystem. We need further exploration of the Congo Basin forest’s impact on weather and climate throughout Africa. Studies have projected how climate change will impact the Horn of Africa under different temperature rise scenarios, but similar modelling must be conducted in the Congo Basin to determine if increased deforestation would result in a similar tipping point there.

As precipitation becomes more infrequent and unpredictable across the continent, farmers and herders have already been forced to migrate within their home countries or even across borders in search of more secure livelihoods. These stressed conditions have been linked to conflicts in places such as Chad, Nigeria and Mali. More research is needed, however, on how climate change will impact the Congo Basin forest and its hydrological cycle — and vice versa.

As Central African countries attempt to meet growing global demand for wood, palm oil, rubber and other materials through industrial logging and large-scale agriculture, threats to these forests will only intensify. We now have an opportunity to stop the destruction of one of the world’s biggest tropical rainforests before it becomes an urgent situation. The more we understand these forests’ value, the better case we can make for their protection. The alternative is to learn more about these links the hard way — when much of this forest has been destroyed, and there is no choice but to live with the consequences.