Pinky Sonawane spent her childhood gathering garbage on the streets of Pune, India. She’d join her mother in pulling plastic bottles, cans and cardboard from roadside dumpsters, selling the materials to scrap traders for income. With no organized waste-collection system in the city of 4 million people, there was plenty of waste for her to pick—it filled bins, littered streets and piled up in mountainous heaps in dumps. But Sonawane and others like her were often treated like the garbage they collected.

“We faced a lot of problems,” she told WRI. “People said ‘Don’t come around here. You are thieves.’”

Today, Pune is different—both physically and culturally. The city is destigmatizing waste picking while bridging a municipal service delivery gap. 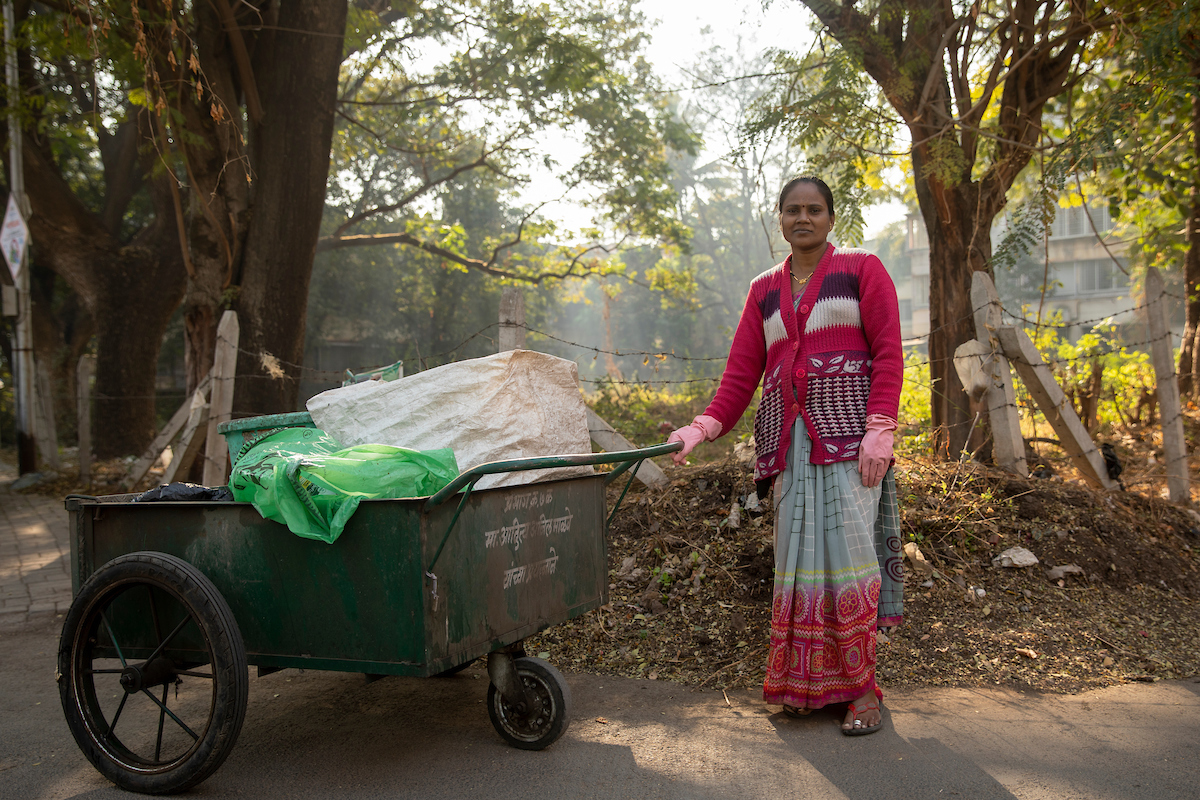 Waste pickers like Sonawane wear green vests and lanyards with identification cards. They push collection carts along the streets, collecting waste door to door rather than picking in landfills and from roadside containers. Residents and city officials regard them as service providers, pay for their services and treat them with respect. And the trash is no longer reaching crisis proportions. Around 80 percent of Pune’s citizens receive door-to-door waste pickup, including many of the city’s previously unserviced slums.

SWaCH is a finalist for the WRI Ross Prize for Cities. Learn more here.

The Start of SWaCH

Pune isn’t the only city that has struggled to contain its waste. Municipal solid waste went largely unmanaged in the 1990s in many of India’s fast-growing cities, causing pest problems, rampant dumping and public health crises. 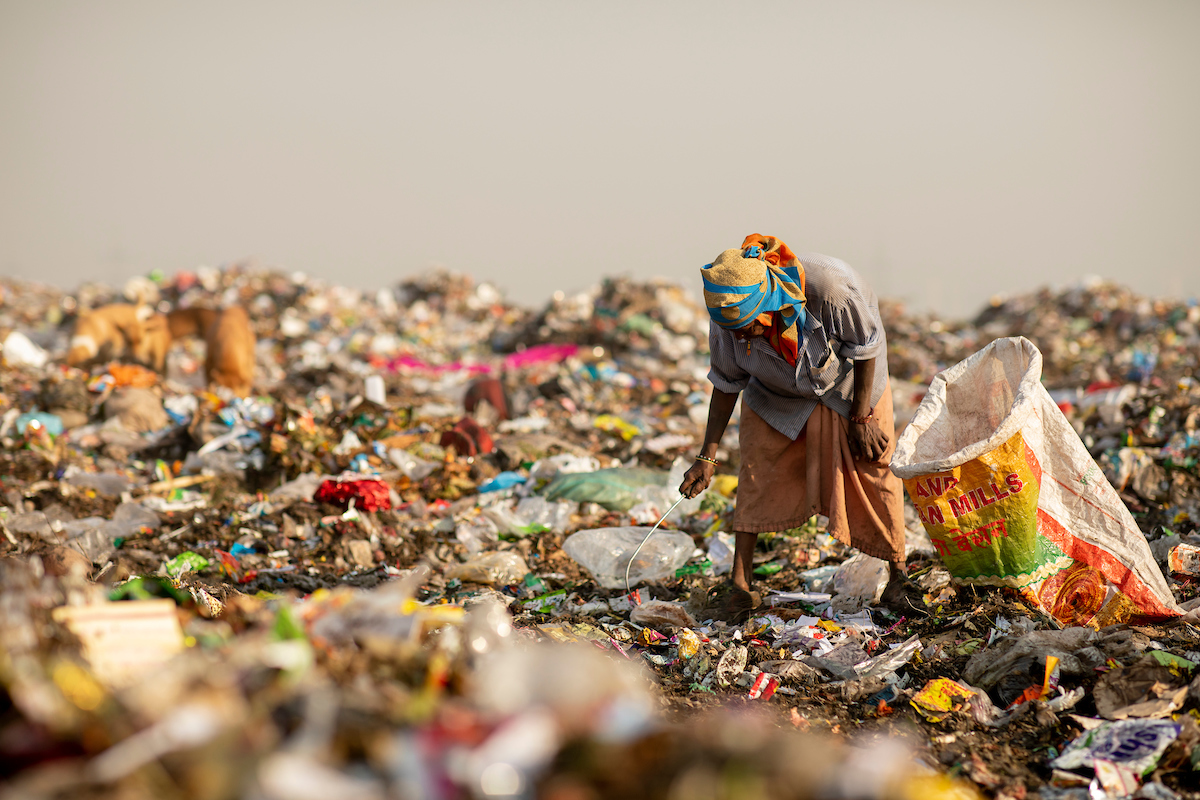 Prior to SWaCH, waste pickers gathered in landfills to scrounge for recyclables. Photo by Kyle Laferriere

So in 2000, India’s national government issued its first Municipal Solid Waste Management Rules, requiring local governments to collect garbage door to door, separate recyclables from wet waste and put a stop to indiscriminate dumping. Like most Indian cities, Pune was ill-equipped to comply. Only 7 percent of households received door-to-door waste-collection services at the time and the number of households separating wet and dry waste was even lower.

SWaCH grew out of the local Pune waste pickers’ union, Kagad Kach Patra Kashtakari Panchayat (KKPKP), which had been advocating for the rights of this previously fragmented and disempowered workforce since 1993. KKPKP and the Pune Municipality began the pilot program that would eventually become SWaCH in 2005 to test out door-to-door service. 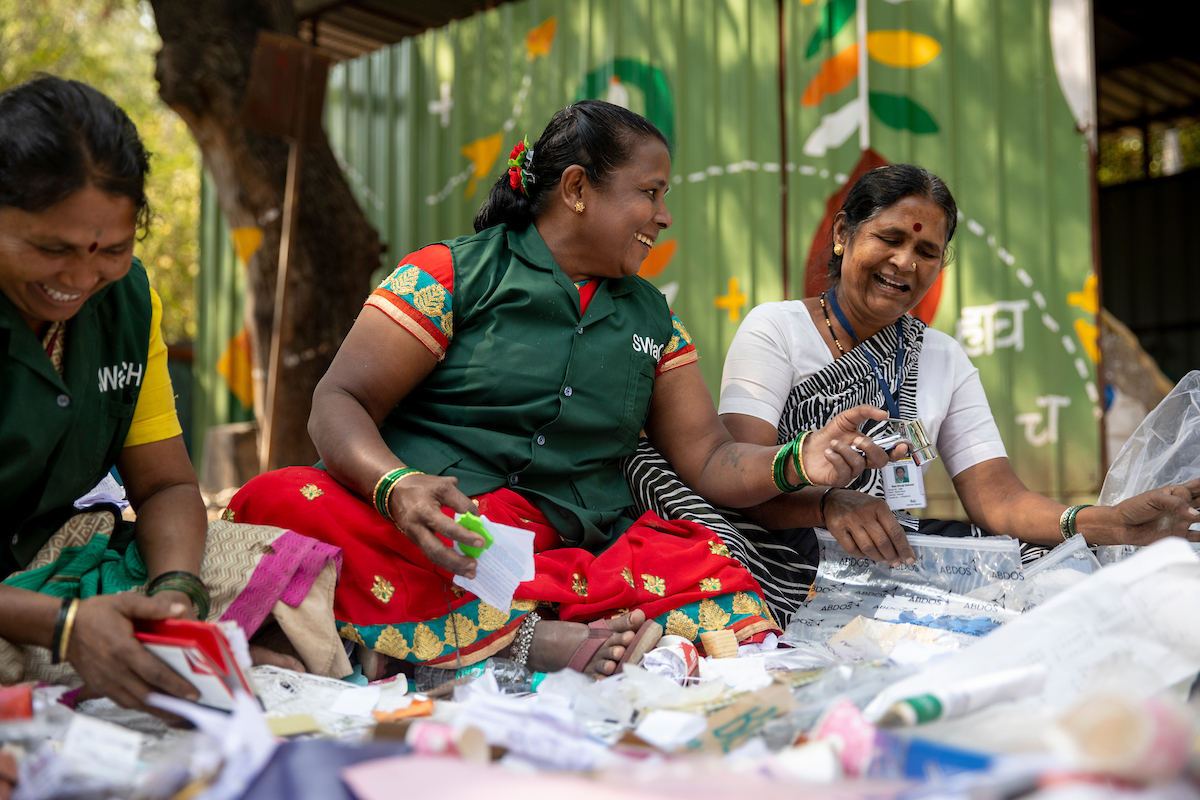 In SWaCH, each waste picker purchases shares in the cooperative. Waste pickers work in pairs to collect garbage directly from 150-400 households. They sort it and drop off non-recyclables at city-run feeder points, and make a living from charging customers a fee and selling recyclables to local scrap dealers. Those who service slum households also receive a per-household subsidy from the city to make up for the fact that fewer recyclables are usually thrown out in low-income areas. A council advocates for workers’ rights and negotiates with the city for occupational health and safety standards, workers’ benefits, equipment, sorting facilities and access to health care. To date, they’ve negotiated two long-term contracts with the Pune Municipal Corporation, and for a time between contracts, SWaCH was able to maintain operations solely on user fees. 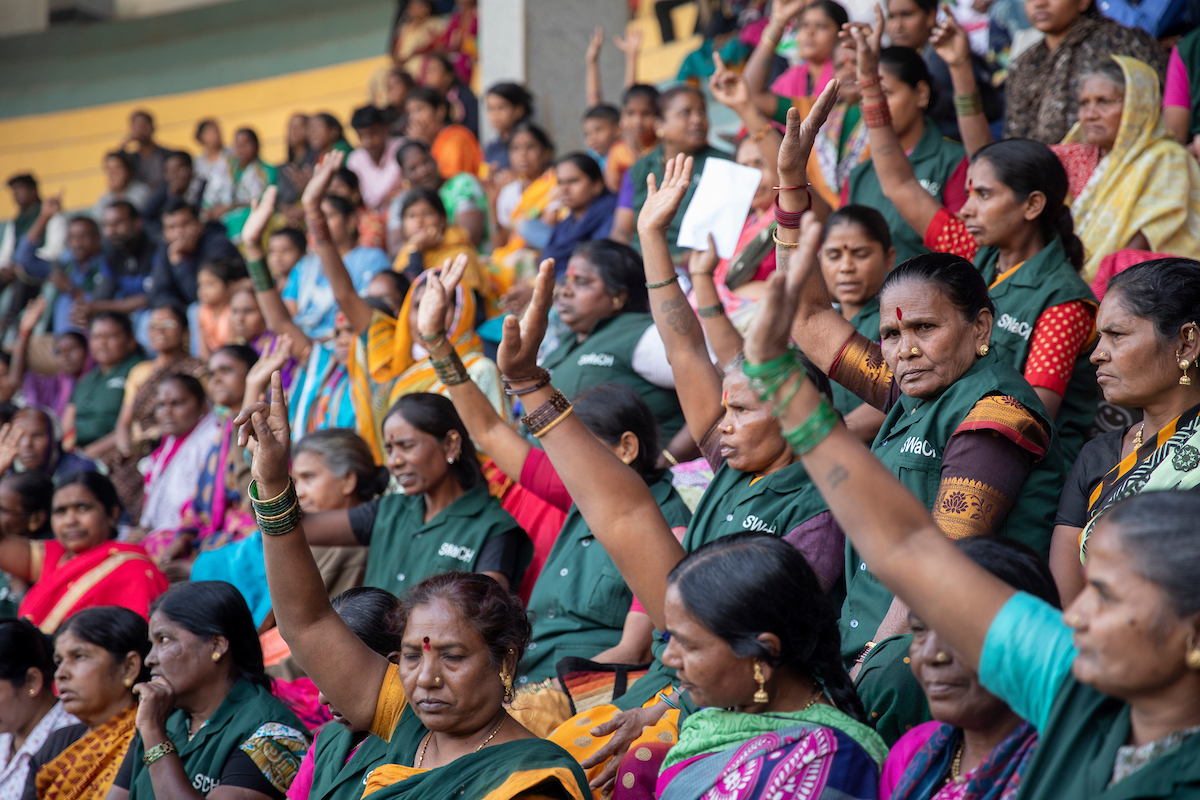 Pune looks different today than it did in the 1990s. More than 3,500 waste pickers have joined SWaCH’s ranks, mainly lower caste women and “Dalits,” previously known as “untouchables.” They handle 1,000 tons of waste every day and recycle more than 70,000 metric tonnes of materials a year.

“Everybody has become more aware of the waste pickers,” said Mini Shrinivasan, a SWaCH customer. “Their lives have become like a little more familiar for us, and now people have started thinking of them as working women.” 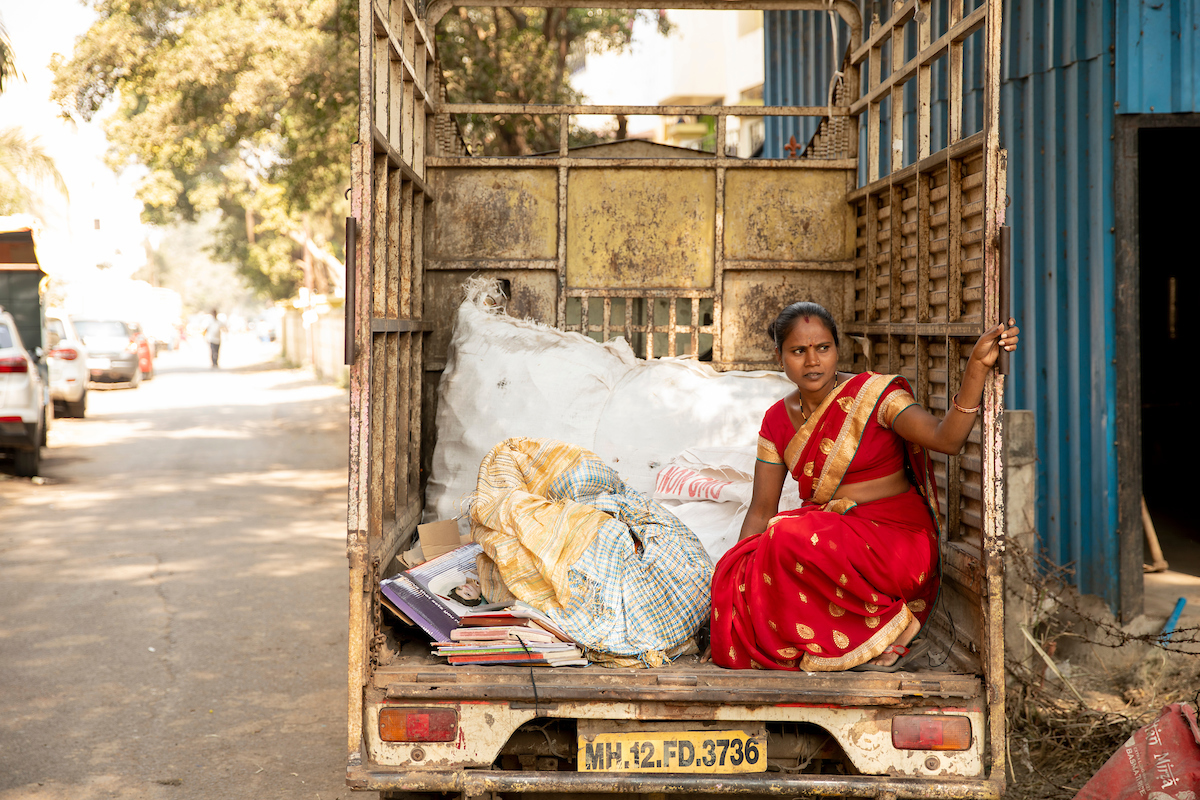 Beyond earning a more respected place in society, SWaCH workers are making more than ever before. Sonawane said she earns a monthly income of 13,000 rupees ($188)—more than her husband—and receives an additional 300-350 rupees per week from selling the recyclables she collects.

“I have built my house with my own savings,” she said. “I’ve bought the appliances that I need and also saved money for my children’s education.”

“A waste picker today in SWaCH is the owner of an enterprise that offers her a dignified livelihood,” said Lakshmi Narayan, SWaCH’s co-founder. “It makes for an inclusive city in many ways.” 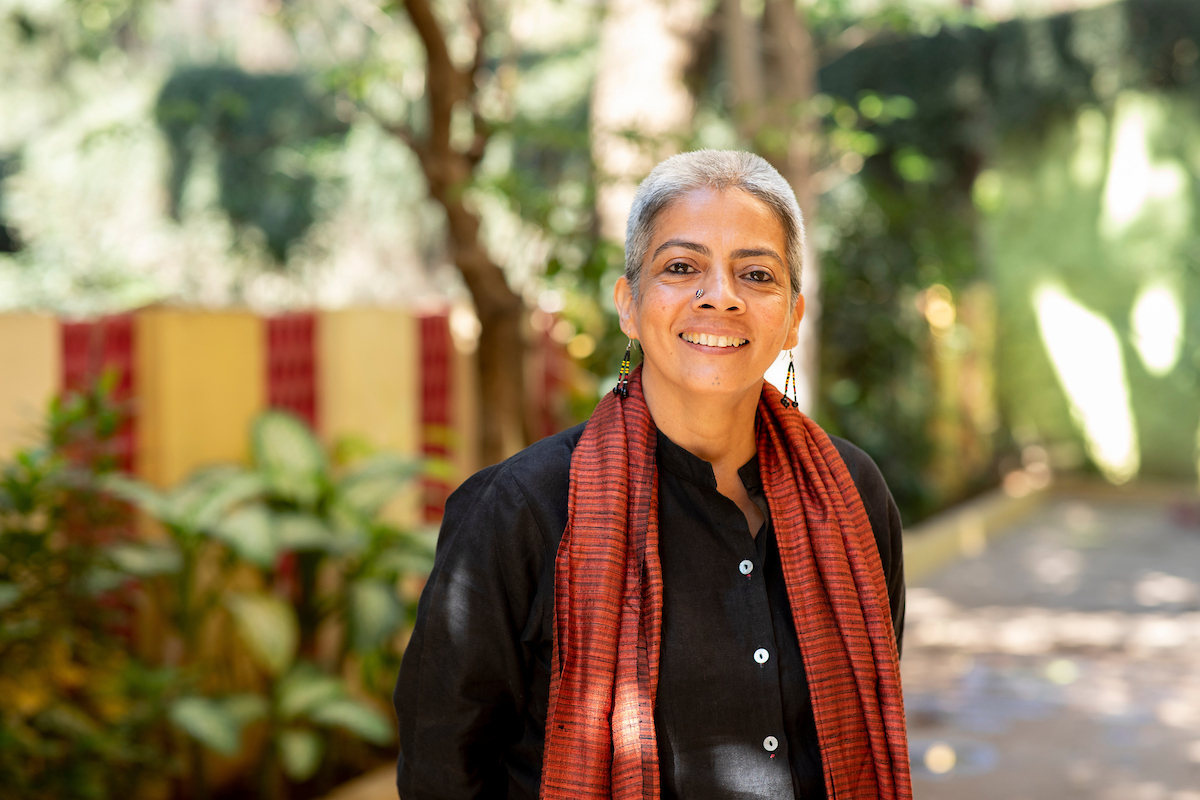 SWaCH As a Blueprint for Other Cities

The ripple effects of SWaCH’s success are spreading beyond Pune. In 2016, the national government passed legislation requiring all Indian cities to register waste pickers, provide them with identification cards and include them in decision-making processes.

The city of Bangalore has adopted a modified version of the SWaCH model, integrating waste pickers into dry waste collection. And in Pune, SWaCH has expanded its services to e-waste collection, clothing reuse, composting and more.

Said Narayan: “SWaCH basically offers a blueprint for a paradigm shift in waste management to ensure that cities can recycle much, much more of the waste that they’re generating.”

Our blog series, Urban Transformations, spotlights finalists for the inaugural WRI Ross Prize for Cities, a global competition for transformative projects and initiatives that have ignited citywide change. The winner, selected from nearly 200 submissions from around the world, will be announced April 10, 2019 in New York City. For more information, visit wrirossprize.org.