While 2017 was a banner year for plant-based eating — with plant-based burgers and other alternative proteins coming to market — 2018 began with headlines proclaiming a new year filled with meat. The U.S. Department of Agriculture sparked these stories by predicting that Americans will eat a record amount of beef, pork and poultry this year.

The meaty headlines — complete with pictures of burgers and steaks — aren’t necessarily wrong, but they don’t tell the whole story. Even while total U.S. per capita consumption of meat has crept up over the past five decades, the mix of meats Americans eat has shifted dramatically, with the share of beef declining. Because eating lots of meat—especially beef—will make it harder to feed a growing global population while meeting key Sustainable Development Goals on climate, forests and water, it’s important to recognize the subtleties in the changing U.S. diet.

A More Sustainable American Diet, Even with Lots of Meat

Per capita U.S. beef consumption peaked in the 1970s and has since declined by about one-third, according to USDA data on food availability. “Availability” measures food production and then adjusts for trade to show how much food is available at the retail level, providing a decent proxy for domestic food consumption. Pork consumption stayed relatively constant over the same period, while consumption of chicken more than doubled. All told, 2018 could well be another record year of U.S. chicken consumption. While some assert that “beef will always be king” in America, the data show this hasn’t been the case since around 1990, and won’t be in 2018 either. 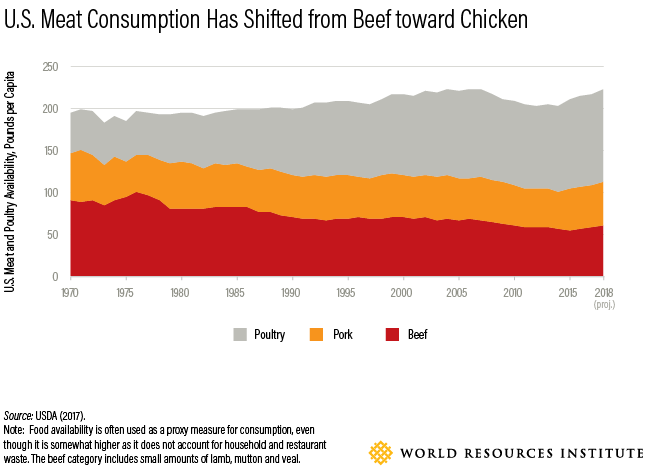 While swapping out beef for chicken in diets can be problematic for animal welfare — more animals eaten overall, often raised in more crowded conditions — it does reduce pressure on the global environment. Beef production requires about seven times more land and emits seven times more greenhouse gases as chicken per gram of protein. (A shift toward plant-based foods would be even better for the environment: beef production is 20 times as land- and greenhouse gas-intensive as beans, for example.)

Between this beef-to-chicken trend and steady improvement in American farming efficiency, U.S. individual dietary footprints are likely lower now than they were 50 years ago. Indeed, the NRDC estimated that from 2005 to 2014 alone, total U.S. diet-related greenhouse gas emissions fell by about 10 percent, mostly due to a 17 percent decline in beef consumption during that decade. Per capita beef consumption has since inched back upward to levels last seen in 2010, but it remains far lower than its peak.

Changes in Preferences, Production and Prices

What’s behind this enormous shift from beef to chicken consumption? Beef industry-funded research from 2009 points to a combination of health concerns (for example, links between fat consumption and heart disease), an increase in women in the workforce (because women were often the ones who did the cooking at home and beef can take longer than chicken to prepare), and increased availability of ready-to-cook chicken products. More recent USDA research cites increases in chicken production, as well as production efficiency, leading to more chicken on the market over time — and a lower retail price for chicken than beef, possibly encouraging consumers to make the swap. 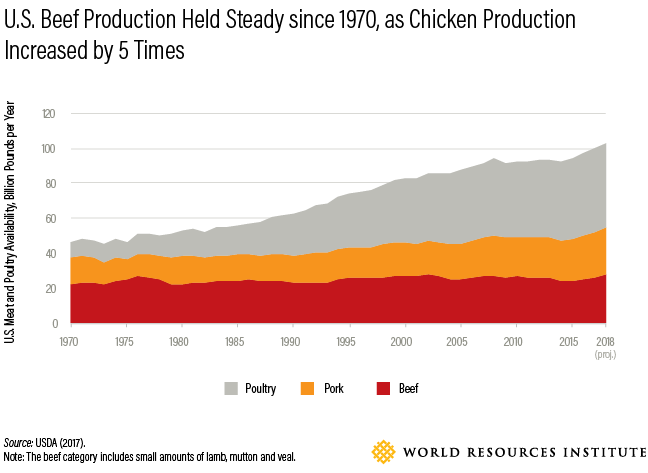 Prices and production patterns may also explain the recent rebound in total per capita U.S. meat consumption — particularly beef consumption — since 2014. According to Rabobank, the primary driver for the downturn in meat consumption from 2005 to 2014 was high meat prices relative to consumer incomes, although consumers’ changing preferences for more plant-based foods and less meat may have also played a part. The Great Recession lowered incomes, and rising feed prices—along with other factors—led to a decrease in meat production and an increase in the price of meat. With the recession now over, feed prices back down and meat production back up, one might expect U.S. meat consumption patterns to bounce back to previous highs — unless consumer preferences really have changed.

Toward a Sustainable Food Future

Beef is no longer “king” among meats in the U.S. diet, but it remains the most environmentally consequential food we eat, accounting for nearly half of Americans’ dietary footprint. And while U.S. per capita beef consumption is down from its peak, it’s still higher than almost anywhere else in the world and four times as high as the world average. At the global level, beef production and consumption continues to rise as incomes rise across the developing world. Researchers have shown that without further decreases in beef consumption in high-consuming countries, it will be extremely difficult to limit global warming to 2 degrees C (3.6 degrees F) above pre-industrial levels—which is needed to ward off the worst impacts of climate change—even when assuming additional advances in agricultural efficiency and productivity. 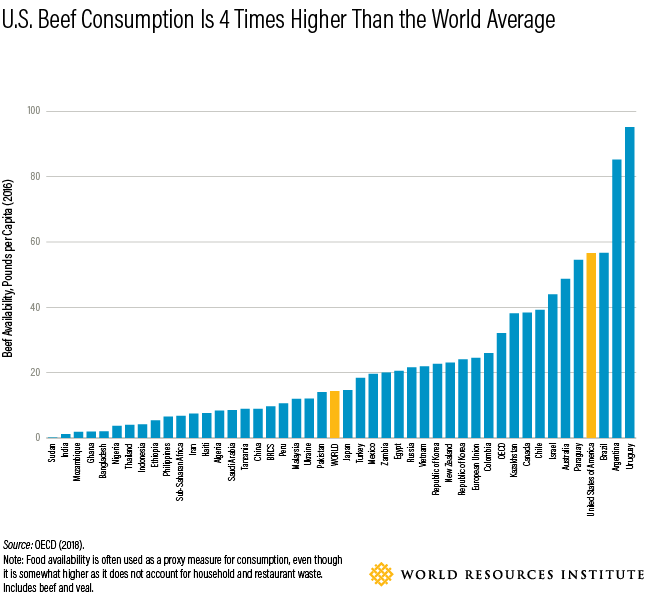 More efforts are necessary to accelerate the shift to a more sustainable American diet, with a greater share of plant-based foods. Luckily, as the data above show, large shifts in consumption patterns are possible in just a generation’s time. If the next wave of plant-based foods and plant-forward meals can compete with all meats like chicken did with beef—on important consumer attributes like taste, price, convenience, and nutrition—we could be at the start of a very important dietary transition.

Later this year, as part of our final Creating a Sustainable Food Future report, WRI will release new modeling that shows just how much national and global diets need to shift toward plant-based foods by 2050 to feed a population of nearly 10 billion within environmental limits. We’ll also publish insights from our Better Buying Lab showing how food companies can use marketing and behavioral science to enable consumers to select more healthy and sustainable meals. Stay tuned!