"We could be overwhelmed thinking about the challenges that are created for Hampton Roads by sea level rise, but if you peel that challenge back, it has tremendous, tremendous opportunities."

This was the message from Assistant Secretary of the Navy, Vice Admiral Dennis McGinn at WRI yesterday when talking about the challenges and opportunities the Hampton Roads, Va. area faces in confronting climate impacts like sea level rise. McGinn joined representatives from the National Security Council, Old Dominion University (ODU), and former Navy Rear Admiral Jonathan White during an event that marked the culmination of the more than two-year Hampton Roads Intergovernmental Pilot Project.

Led by the Department of Defense (DOD), the Navy and ODU following a 2013 Presidential Executive Order on climate change, the pilot project is helping develop a framework to coordinate climate resilience planning between local government and DOD. The project specifically focuses on the threat climate change poses to national security and the economy.

No other region in the country was better suited for this project given the unique combination of factors in Hampton Roads. The area is facing the fastest rates of sea level rise along the U.S. East Coast and is the nation’s second-largest population center at risk from sea level rise. Nearly all major military bases in the region are threatened by sea level rise, and close to 50 percent of the local economy comes from DOD spending.

Three key themes of recommendations emerged from the pilot project:

A Model for Other U.S. Coastal Communities

Importantly, the pilot is a model for other coastal communities facing similar impacts and vulnerabilities that threaten shorelines and national security. McGinn noted that climate change is a threat multiplier, with extreme weather events compromising the political stability of fragile regions around the world. These threats put our men and women in uniform in harm’s way as they are forced to respond to instability. Climate impacts such as sea level rise also threaten military readiness and the future viability of some military bases. Nearly 130 DOD installations valued at approximately $100 billion would be threatened by a 3-foot rise in sea levels, which is well within the range of sea level rise projections through the end of the century. 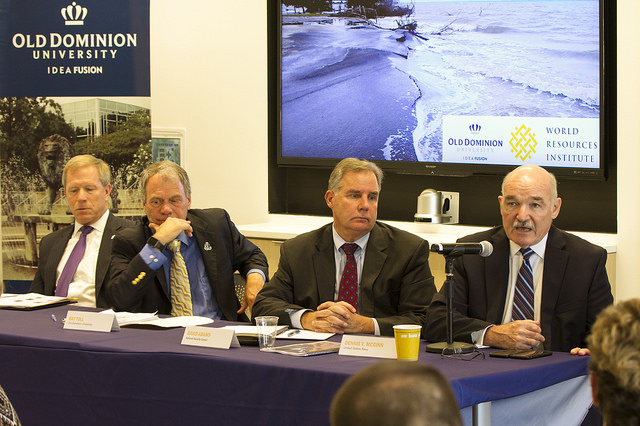 David Adams, director for health security and climate resilience policy and acting senior director for resilience policy at the National Security Council, echoed the influence climate change impacts have on national security at home and abroad. He stressed the need for collaboration, particularly between the science and intelligence communities. Adams pointed to the recent Presidential Memorandum issued on national security and climate change as an effort to address these challenges. For the first time, the U.S. government has directed federal agencies to consider the impacts of climate change on national security doctrine, policy and plans across the government. This “whole of government” approach is similar to what the pilot project in Hampton roads seeks to achieve by ensuring that governments and communities are coordinated in their approach to building climate resilience.

Not Just a Challenge, an Opportunity

Despite the significant challenges posed by climate change and sea level rise, McGinn remarked that with a new administration and a new Congress, there is an opportunity to address infrastructure investment. He noted that by addressing infrastructure “in a way that is mindful of the effects of climate change, we can really create tremendous outcomes…higher quality of life, better economy, as well as being much more resilient in the face of the threats of climate change.”

One key question stemming from the pilot project and yesterday’s event is how we are going to make investments moving forward. As hit on directly by McGinn, “it’s a matter of spending wisely and getting the return on investment in resiliency at the same time you are creating jobs and providing economic development...” By building climate resilience into infrastructure investments, plans and projects, we can protect citizens from future climate impacts while creating new jobs, advancing public safety and promoting economic development.