As countries embark on the transition to a new climate economy, there’s a debate about whether growth can drive, or even coexist with, climate stabilization. On the other side of the coin, it’s also a discussion of whether climate stabilization can drive growth. The debates on growth and resources are complex, fractious and centuries old, and while they won’t be resolved in the immediate future, recent developments show that global greenhouse gas (GHG) emissions stayed flat in 2014 and 2015 while GDP continued to grow. This emerging trend is supported by 21 countries that have managed to reduce GHG emissions while growing GDP. 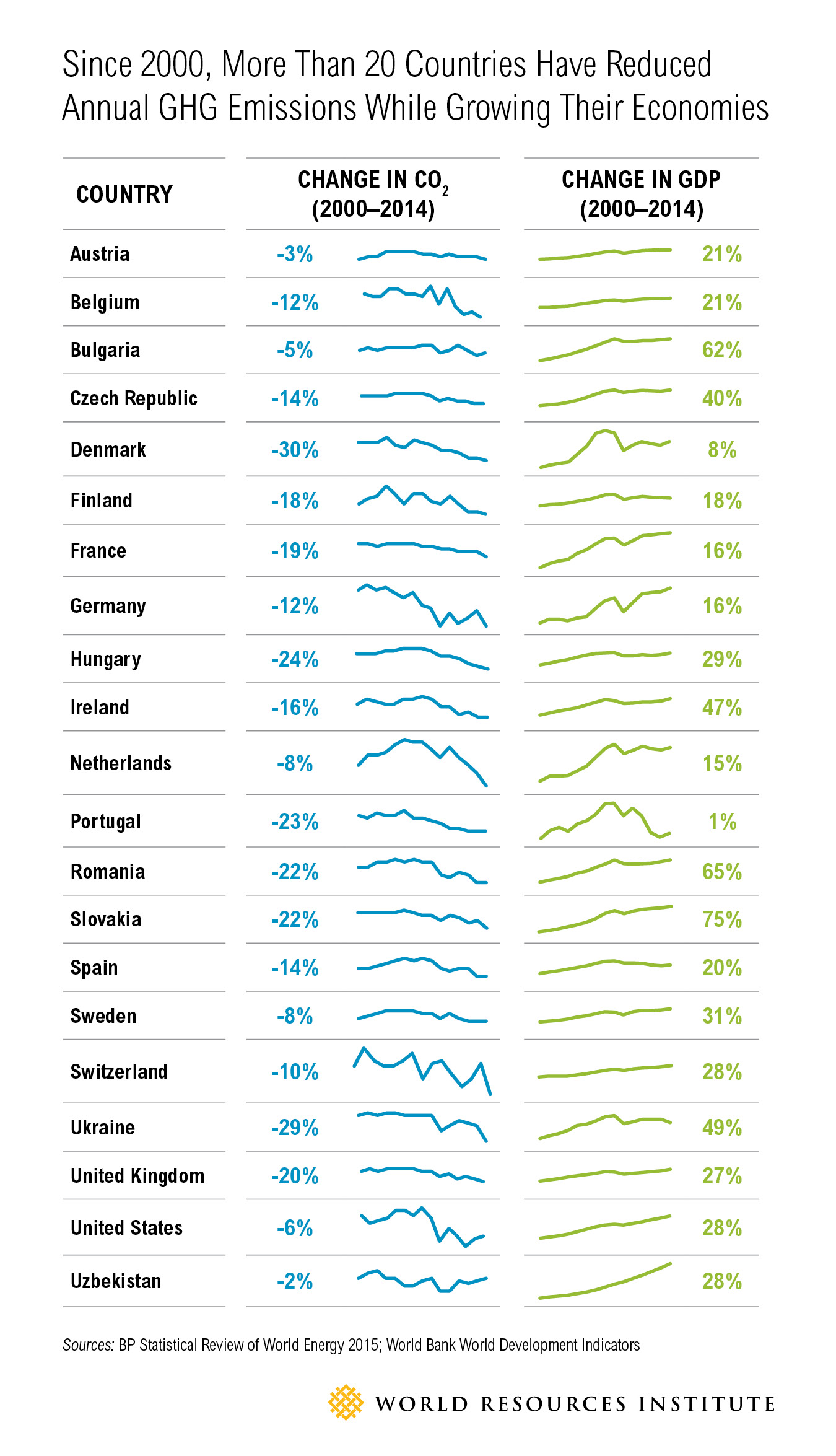 The United States is the largest country to experience multiple consecutive years in which economic growth has been “decoupled” from growth in carbon dioxide emissions. From 2010 to 2012, energy-related carbon dioxide emissions declined by 6 percent (from 5.58 to 5.23 billion metric tons), while GDP grew by 4 percent (from $14.8 to $15.4 trillion). In its analysis of the Clean Power Plan, the U.S. Energy Information Administration forecasts that moving to a cleaner electricity system after 2020 would bring about a sustained period of GDP-GHG decoupling. As illustrated in the figure below, CPP implementation is expected to reduce total U.S. energy-related carbon dioxide emissions by a further 6 percent between 2020 and 2025, while GDP increases by 13 percent in real terms over the same period. 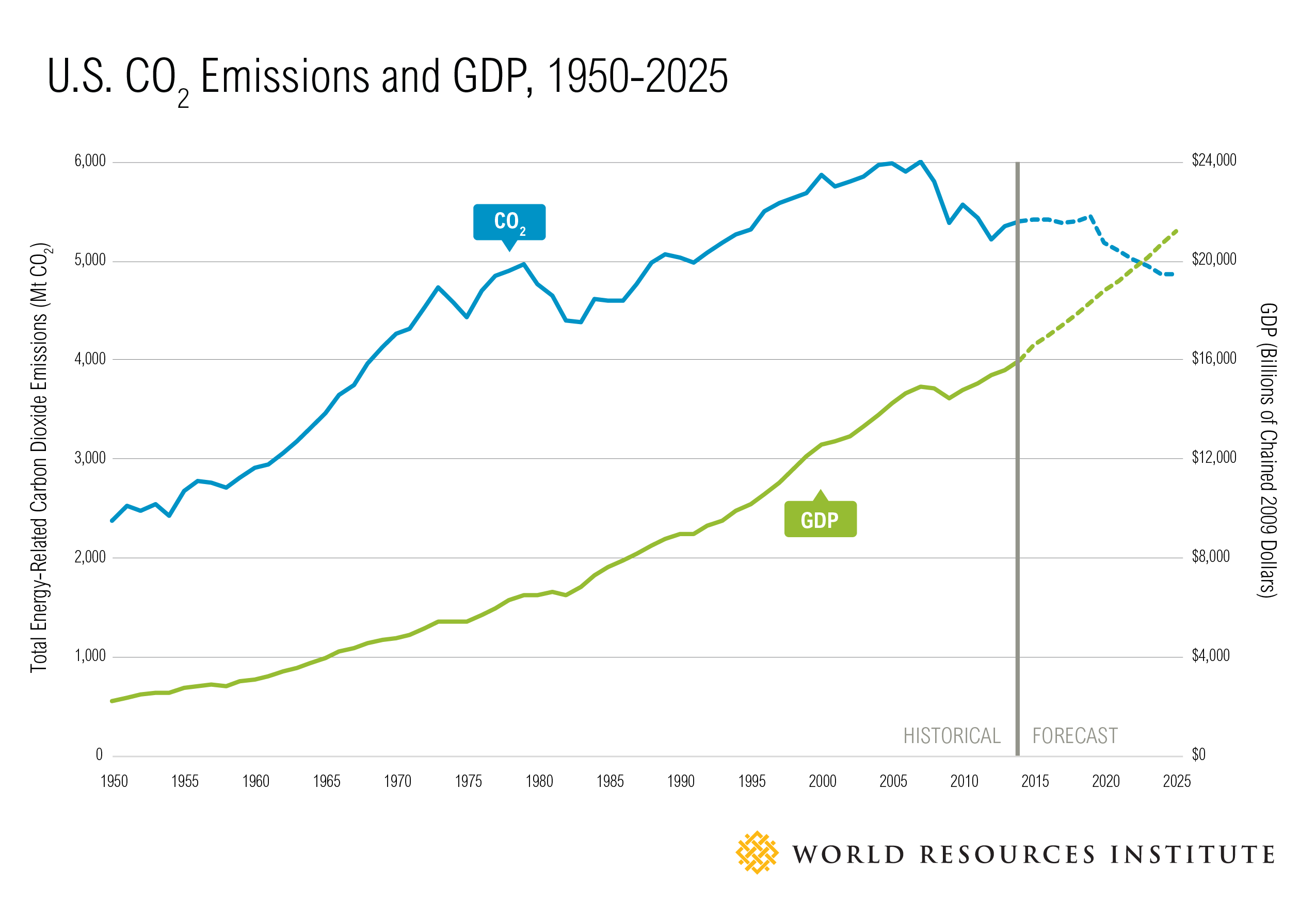 If the United States implements the Clean Power Plan and achieves sustained decoupling, it will be in good company. Twenty other countries achieved decoupling of GDP and energy-related carbon dioxide emissions over the period from 2000 to 2014.

The UK is an example of a country where economic growth and CO2 emissions have increasingly diverged. Between 2000 and 2014, the UK achieved six years of absolute decoupling where real GDP grew at the same time that carbon dioxide emissions declined. Over the 14-year period, emissions dropped from 591 to 470 million metric tons of energy-related CO2, while GDP grew from $2.1 to $2.7 trillion (constant 2005 U.S. dollars). 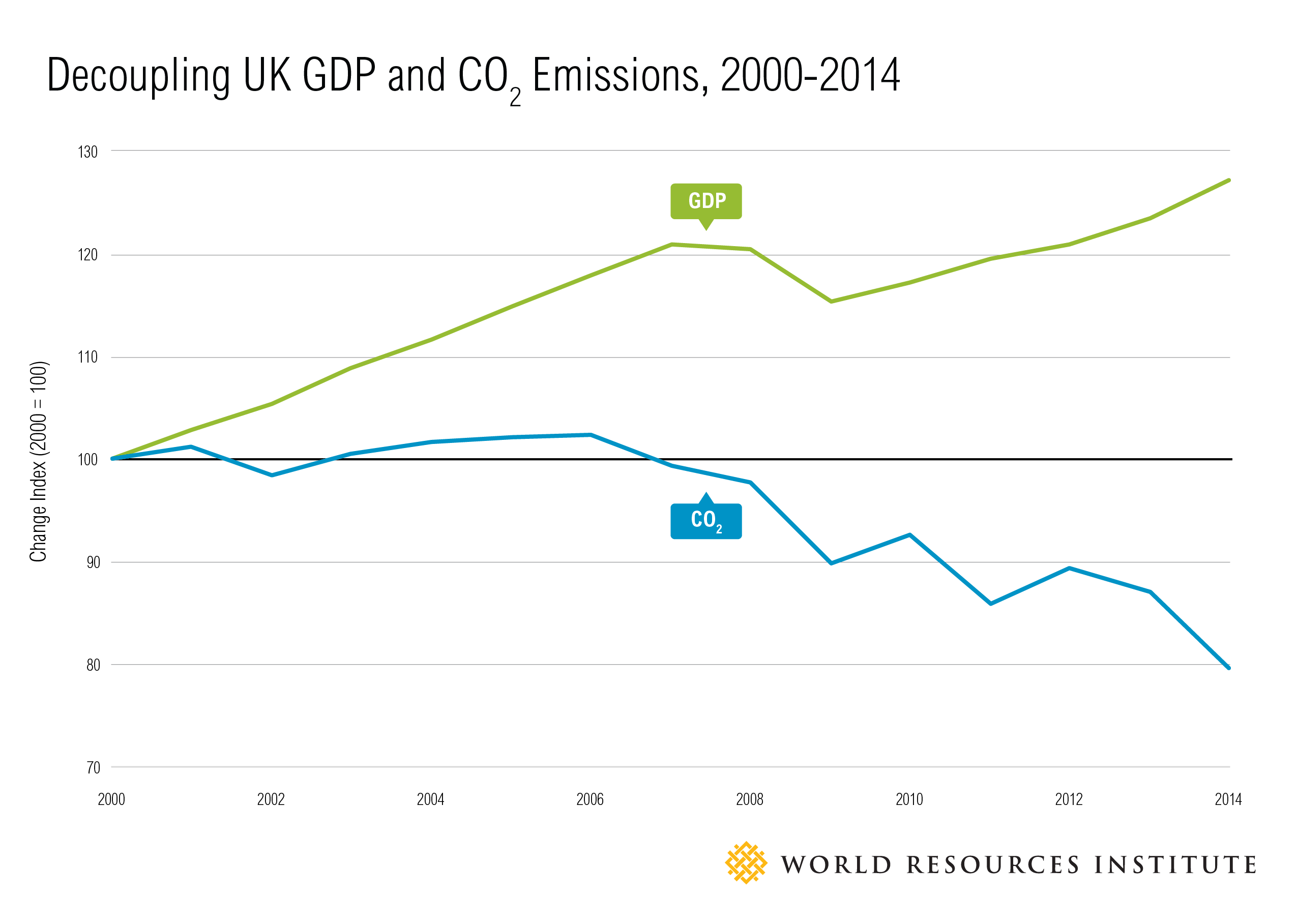 How Have Countries Decoupled?

There is not a single formula, policy or demographic trend that’s driven GDP-GHG decoupling across all countries. Sweden, for example, implemented ambitious policies including carbon taxes that supported its decoupling. Denmark’s rapid increase in renewable energy reduced emissions while stimulating local production.  As illustrated in the table below, another key factor in many countries is a structural shift of the economy away from emissions-intensive industry.

More than 90 percent of the countries that decoupled GDP and GHG emissions between 2000 and 2014 reduced the industrial sector share of their economies. However, the exceptional cases of Bulgaria and Uzbekistan demonstrate that GDP-GHG decoupling is also feasible in countries with expanding industrial activity (not to mention Switzerland and the Czech Republic, where the industrial portion of GDP remained essentially steady). Across the 21-country group, the average change in the industry share of GDP was a 3 percent reduction over the period, with an average CO2 reduction of 15 percent.

Shifting to a Low-Carbon Path

Decoupling of GDP and GHG emissions in numerous countries demonstrates the feasibility, and increasing prevalence, of the transition to cleaner modes of economic activity. These country-level decouplings are driving the global trend toward decoupling in 2014 and 2015. Beyond the aggregate trends described here, more information is needed on the potential leakage of carbon emissions to other countries as nations move their industries overseas, factors that enable sustained and absolute decoupling, and what’s needed to support larger-scale emissions mitigation.

Over the 14-year period covered here, the aggregate annual CO2 reduction for these 21 countries amounted to slightly more than 1 billion metric tons. Given that total annual global carbon dioxide emissions grew by more than 10 billion metric tons over this period, it’s clear that decoupling needs to be scaled up rapidly to have any chance of limiting average warming this century to 2 degrees Celsius (3.6 degrees Fahrenheit) above pre-industrial levels, the current international target for preventing the worst impacts of climate change. As countries focus on implementing the Paris Agreement, decoupling presents one option to address global climate challenges while preserving economic security.