The world needs to limit emissions to 30-50 GtCO2e in 2030 to stay within range of limiting global warming to 2 degrees C and prevent some of the worst impacts of climate change. Yet, according to a new report from the MILES project Consortium, the national climate plans (INDCs) that countries have submitted so far in the run-up to COP 21 in Paris would put the world on an emissions pathway that would lead to about 54 GtCO2e being emitted in 2030. The INDCs still reduce emissions significantly (without them emissions would be over 60 GtCO2e in 2030) but do not go far enough to limit warming to 2 degrees C.

So how can we close this gap?

By including the right “signals” in the new climate agreement to be decided in Paris later this year. We need clear and strong signals both for the short-term – to catalyze action leading up to 2030 – and for the long-term after 2030 – to give a direction and pace our actions must take.

If the Paris agreement includes these policy signals to ratchet up countries’ climate action, businesses, investors and innovators would have greater incentive to accelerate their own efforts to reduce emissions – deploying more low-carbon technologies, investing in renewable energy and maximizing efficiencies. According to the MILES report, the additional effort resulting from the signals in the agreement could avoid an additional 5 GtCO2e, bringing global emissions to 49 GtCO2e in 2030, within range of achieving the 2 degree goal and ensuring a smoother transition to a zero-carbon economy. 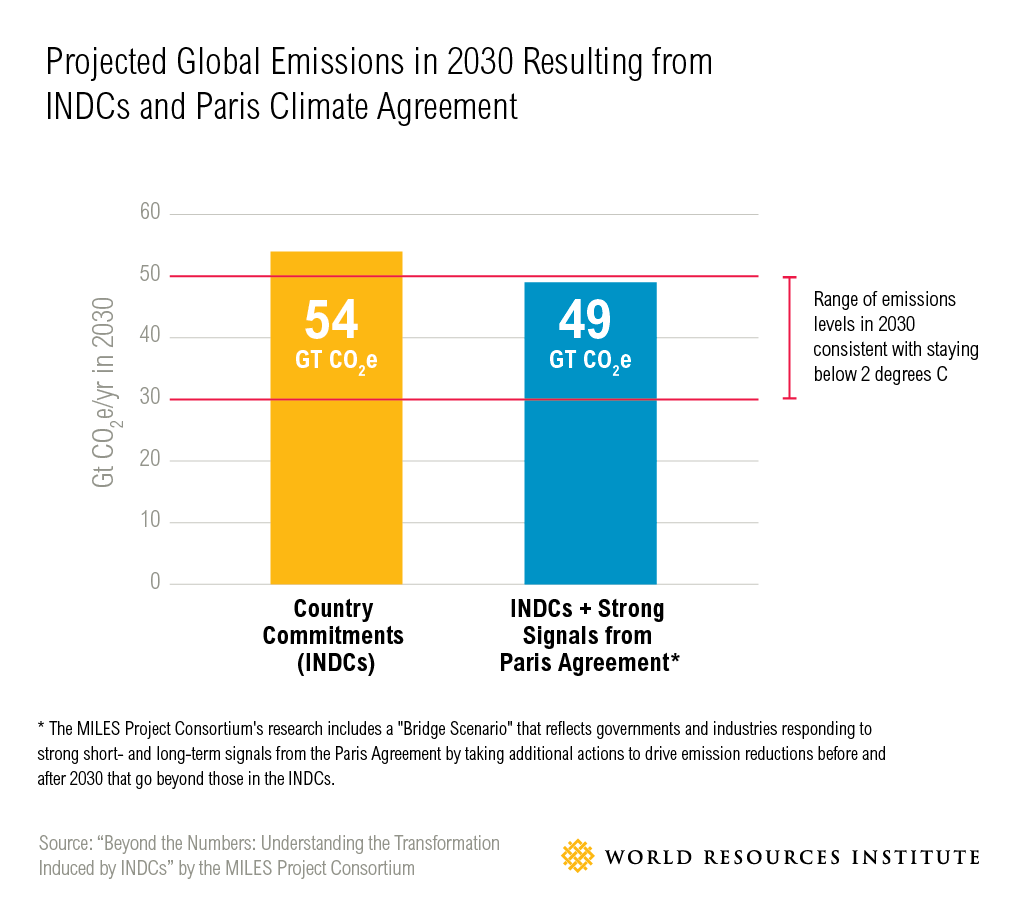 How Can We Get from Here to There?

At the Paris climate negotiations, negotiators can send clear short-term signals by agreeing to increase countries’ climate action commitments every five years. Putting this regular, forward-looking process in place now would immediately inform business plans and investment decisions for future action. The global climate agreement can also send a clear long-term signal through a clear objective for longer-term emissions reductions, such as setting a goal to decarbonize the global economy over the course of this century, setting a date to phase out emissions to net zero, and/or peak emissions globally. Such a long-term goal in the agreement would guide the direction when setting short-term commitments and foster a deliberate, transformational path toward a zero-carbon future.

The Role of the Private Sector

The private sector also has a large role to play in shaping the Paris outcome on policy signals. And according to a new WRI publication, Driving Transformative Change: The Role of the Private Sector in Advancing Short-term and Long-term Signals in the Paris Climate Agreement, it’s in businesses’ best interests to do so.

The private sector is already taking more aggressive climate actions than before, such as the adoption of emissions-reduction targets, programs to improve energy efficiency, and fuel switching to renewable energy sources. However, the pace and scale of these changes are not yet enough to avoid serious disruption in the decades to come. The private sector should engage actively in this process and reap the associated benefits by:

The Benefits for Business

Setting strong short- and long-term signals in the Paris Agreement can help create a policy environment that will enable businesses and investors to reap significant benefits, such as:

It is not every year—or even every decade—that there exists a political opening to secure the right short- and long-term signals that will help us achieve the transition to a zero-carbon future in a manner that is equitable, and involves the least cost and the least disruption possible to avoid catastrophic impacts. The upcoming decisions at the Paris negotiations present an opportunity to put our global community on the right path, providing appropriate short-term signals for investors and innovators, as well as a strong long-term signal that guides the phase-out of greenhouse gas pollution.