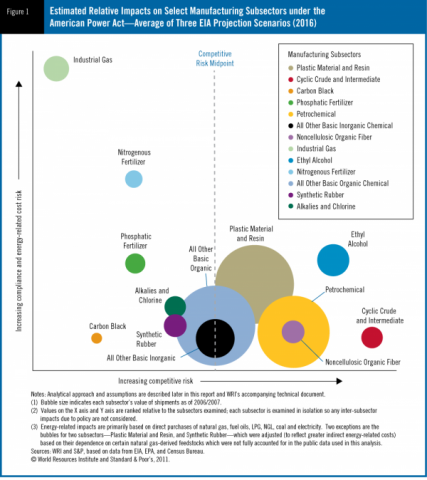 If passed, the American Power Act (APA) would require companies to hold permits to emit GHGs for all emissions from facilities emitting more than 25,000 tons of carbon dioxide (CO2) or equivalent greenhouse gas. Most large U.S. chemical facilities would meet this threshold. By limiting the supply of these permits— known as emissions allowances—in the market, the government would be able to cap economy-wide emissions. The APA also includes provisions that would rebate free emissions allowances to facilities in select subsectors. Eligibility for these free allowance rebates is at the subsector level, and depends on a subsector’s energy intensity and trade exposure.

WRI has calculated that the APA provides enough free allowances to energy intensive, trade exposed manufacturing industries that any eligible subsector—as a whole—will receive enough free permits to cover all emissions in that subsector for 2016 and several years beyond (see WRI’s accompanying technical document). However, the risk remains that the supply of free permits relative to demand may decline over time and at a faster rate than originally envisaged.

Predicting how the APA would affect the economy is challenging. For their analysis, Standard & Poor’s and WRI have each relied on the U.S. Government’s Energy Information Administration’s (EIA) projections of APA’s impact on GDP, energy prices, and GHG emissions permit prices. As with any forecasting, these projections indicate what could happen, rather than what would happen.

Standard & Poor’s and WRI based their respective analyses on EIA projections using three GHG permit price scenarios—low, medium, and high—under the APA. Based on these projections, most of the chemicals subsectors we examined would only see modest energy and compliance effects in the first year of assumed compliance (2016).

Summary of Relative Subsector-Level Vulnerability under the American Power Act