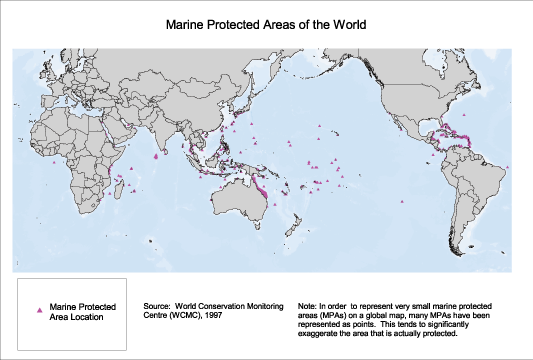 Note: This analysis has been updated. Please see Reefs at Risk Revisited (2011) and the map Marine Protected Areas in Coral Reef Regions Classified According to Management Effectiveness Rating for the most recent data.

The development of a global system of marine protected areas (MPAs) lags far behind that of the terrestrial biosphere in both the extent and the effectiveness of its coverage. Nonetheless, it is increasingly apparent that MPAs can play a vitally important role in protecting marine habitats, particularly when forming part of a wider program of measures for coastal and marine management. Many coral reef scientists and managers promote the inclusion of small reserves in planning at the scale of the municipality, while large reserves are the necessary supplement to ensure sustainability and to provide for the needs of species requiring large areas to forage.

Based on what is probably the most comprehensive list currently available,[1] we estimate that there are at least 400 MPAs including coral reefs in more than 65 countries and territories. Although important as it currently stands, this list clearly does not represent anything like a global network, although it does provide a framework for one. There are at least 40 countries with no formal protection for their coral reefs, and there are significant regional gaps in this network. The Indian Ocean region, the west coast of the Americas, Solomon Islands, Fiji, French Polynesia, and the Philippines, for example, are all underrepresented. With the exception of a few very large sites such as the Great Barrier Reef, the Florida Keys National Marine Sanctuary, and the Ras Mohammed Park Complex in Egypt, the great majority of protected coral reefs are very small indeed: more than 150 of the MPAs mentioned are less than one square kilometer in size. Outside of the largest sites just mentioned, it is likely that less than 3 percent of the world's coral reefs are protected. MPAs provide some of the great points of hope for coral reefs. The Great Barrier Reef, the world's second-largest protected area (after northeast Greenland!), is a model of integrated and multiple-use management, allowing sustainable utilization of the reef by a wide range of users with numerous and often conflicting needs. Bonaire Marine Park in the Caribbean is one of the first self-funding protected areas, supported entirely from tourist revenues (which also bring in half of that country's total gross domestic product). Apo Island, in the Philippines, is a tiny fishing reserve that, in the years since its designation, has allowed stocks to recover sufficiently so that local fishermen operating in the surrounding areas are reporting major increases in fish yields. Such cases provide overwhelming support for the economic, social, and political arguments to protect coral reefs.

However, many existing MPAs exist only as "paper parks" where legislation is not enforced, resources are lacking for protecting these areas, or management plans are poorly conceived. In other MPAs, management safeguards are in place, but pressures outside parks and reserves undermine the integrity of protected marine habitats. This was documented in a recent global study, where of 383 MPAs assessed for management effectiveness, conservation objectives were achieved at less than a third (117) of these sites (that is, management effectiveness was ranked as "high" ).[2]

Johnston Atoll serves as one example of this problem. Probably among the earliest designations of a coral reef protected area, this site has been subjected to massive military development, high atmospheric nuclear testing, chemical waste disposal, and other threats. Elsewhere, external influences beyond the control of the management agencies undermine protected marine habitats. Reefs are highly dynamic and open systems. They cannot be fenced off and are dependent on the flow of currents carrying nutrients, circulating water and oxygen, and transporting larvae and other materials. But it is these same water movements that carry pollutants and sediments into protected areas, while overfishing upstream of a reef may cut off the vital supply of new recruits of coral and fish to the reef community.

In this assessment, we found that reefs within many MPAs are under high potential threat. These include the Gulf of Mannar National Park in India; Bunaken, Bali Barat, Komodo, and Kepulauan Togian National Parks in Indonesia; Mochima National Park in Venezuela; Iriomote and Okinawa Kaigan National Parks in Japan; Pulau Tiga and Turtle Islands in Malaysia; Corals del Rosario in Colombia; and others. Protected areas can play a vital role, and act as flagships for the protection of coral reefs, but cannot be designated in isolation. The need for a more concerted and broadly based management regime, in many cases crossing national boundaries, will be essential for the ultimate protection of many reefs.