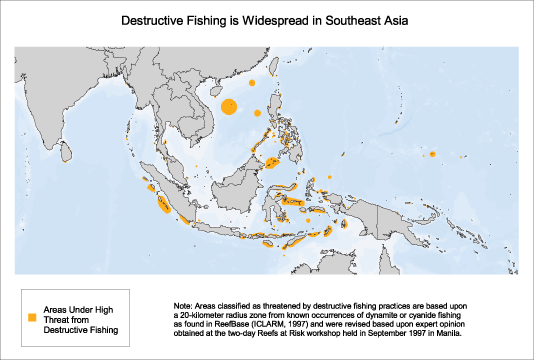 The use of cyanide to stun and capture live coral reef fish began in the 1960s in the Philippines to supply the growing market for aquarium fish in Europe and North America, a market now worth more than $200 million a year. Since the late 1970s, the poison has also been used to capture larger live reef fish (primarily grouper species) for sale to specialty restaurants in Hong Kong and other Asian cities with large Chinese populations. Selected and plucked live from a restaurant tank, some species can fetch up to $300 per plate, and are an essential status symbol for major celebrations and business occasions. As the East Asian economy boomed over the past several decades, live reef food fish became a business worth some $1 billion annually.

Despite the fact that cyanide fishing is nominally illegal in virtually all Indo-Pacific countries, the high premium paid for live reef fish, weak enforcement capacities, and frequent corruption have spread the use of the poison across the entire region -- home to the vast majority of the planet's coral reefs. Since the 1960s, more than one million kilograms of cyanide has been squirted onto Philippine reefs, and the vast Indonesian archipelago now faces an even greater cyanide problem. As stocks in one country are depleted, the trade moves on to new frontiers, and cyanide fishing is now confirmed or suspected in countries stretching from the central Pacific to the shores of East Africa. Sadly, the most pristine reefs, far from the usual threats of sediment ation, coral mining, and coastal development, are the primary target for cyanide fishing operations.

Systematic scientific testing of the impact of cyanide on reefs is scanty, but tests show that cyanide kills corals, and its toxic effects on fish are well known. Anecdotal evidence of the poison's lethal effects on the reef comes from countless scuba-diving operators, field researchers, and cyanide fishermen themselves. The process of cyanide fishing itself indisputably wreaks havoc on coral reefs. The divers crush cyanide tablets into plastic squirt bottles of sea water and puff the solution at fish on coral heads. The fish often flee into crevices, obliging the divers to pry and hammer the reefs apart to collect their stunned prey. Cyanide fishing also poses human health risks: to fishermen, through accidental exposure to the poison and careless use of often shoddy compressed-air diving gear by untrained divers.

Cyanide fishing can be attacked, as experience shows in the Philippines, the only country so far to take concrete action against the problem. That country's Cyanide Fishing Reform Program, a unique partnership between the government and the International Marinelife Alliance (IMA), a local non-governmental organization, has trained thousands of fishermen to use alternatives to cyanide such as fine-mesh barrier nets draped over a reef section to catch aquarium-sized fish and hook-and-line techniques to catch larger fish for the restaurant trade.

The government has stepped up enforcement of anti-cyanide fishing laws by establishing a network of cyanide detection laboratories, operated by IMA, that randomly sample fish exports at shipment points throughout the country and monitor all aspects of the trade. New regulations are slated to make testing a requirement for all live fish exports and to tighten controls on import and distribution of cyanide. A public awareness campaign in the media and public schools is helping to educate Filipinos about the value of coral reefs and the threats posed by cyanide and other destructive fishing practices. Cyanide fishing has not ceased in the Philippines, but it has certainly been reduced as a result of these efforts.

Currently, IMA, the World Resources Institute, and other partners are implementing the only on-the-ground program in Indonesia to train cyanide fishermen in alternative capture techniques, and are collaborating in the Indo-Pacific Destructive Fishing Reform Program to assist governments in at least half a dozen countries in Southeast Asia and the Pacific to combat this poison tide sweeping the planet's largest and most diverse expanse of coral reefs.