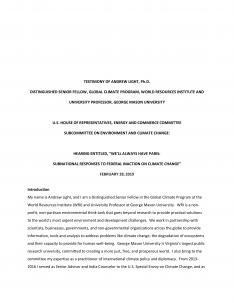 On February 28, WRI Distinguished Senior Fellow Andrew Light testified in a hearing before the U.S. House of Representatives Committee on Energy & Commerce, Subcommittee on Environment and Climate Change. The topic was on the Paris Agreement and nonfederal climate action in the United States. The hearing, entitled “We’ll Always Have Paris: Filling the Leadership Void Caused by Federal Inaction on Climate Change,” examined the importance of the United States’ continued commitment to the Paris Agreement and how cities, states and businesses across the country are stepping up to say, “We're still in.” Andrew's testimony focused on the current state of the Paris Agreement, climate action happening around the world, such as in China and India, and the international impact of U.S. subnational leadership on climate change — both its benefits and limits. Andrew concluded by offering some suggestions for important next steps Congress could take to support this action.