The United States is Acting to Combat Climate Change 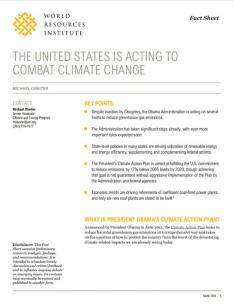 Despite inaction by Congress, the Obama Administration is acting on several fronts to reduce greenhouse gas emissions in the United States.

This fact sheet outlines the steps the Administration has taken to reduce GHG emissions, with more important rules expected soon.

Tell us about yourself
COP27 Priorities: An African Perspective