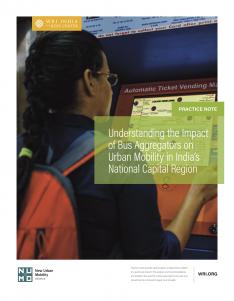 This Practice Note is from WRI India and WRI Ross Center for Sustainable Cities. Reach out to Jyot Chadha for more information.

This Practice Note is from WRI India and WRI Ross Center for Sustainable Cities. Reach out to Jyot Chadha for more information.

Demand-responsive bus services provided by technology-led companies are a recent entry into the transportation ecosystem in cities across the world. Known as bus aggregators in India, these companies are capitalizing on limited mobility options in India’s expanding cities. Bus aggregators operate on routes where commuters have few public transportation options and poor last-mile connectivity. They largely cater to commuters who live in residential hubs that are a significant distance (usually greater than 30 kilometers each way) from where they work. However, bus aggregators are also perceived as providing unfair competition to public transit and siphoning off customers from the transit system’s most profitable routes. This practice note evaluates the environmental impact of Shuttl, a leading bus aggregator operating in India’s National Capital Region (Delhi-NCR). More specifically, it asks whether Shuttl’s services have helped mitigate urban transportation emissions and thereby reduced the environmental costs for Delhi-NCR.