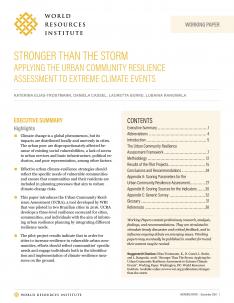 Climate change is a global phenomenon, but the impacts are distributed locally and unevenly in cities. The urban poor are the most affected by climate change and are more likely to live in areas that lack sufficient infrastructure to respond to climate risks.

WRI has developed the Urban Community Resilience Assessment (UCRA), a tool for city planners to measure differentiated needs for climate resilience. Measuring how communities and individuals have responded to potential climate risks can help identify needs for resilience and inform effective urban resilience planning. UCRA was piloted in low-income and vulnerable communities in two Brazilian cities, Porto Alegre and Rio de Janeiro. This paper describes the pilot project results, insights and the potential for UCRA to be applied in other cities. A forthcoming paper will show how UCRA was applied in Surat, India and Semarang, Indonesia.

The results from the pilot projects highlighted differential returns on resilience actions on the ground, as well as new opportunities for resilience building by urban planners.

Investing in the wider city and in community infrastructure does not necessarily translate into resilient individuals.

Climate change is a global phenomenon, but impacts are distributed locally and unevenly in cities. Among communities affected by climate change, the urban poor are the most affected, are more likely to live in areas that lack sufficient infrastructure and service provision, and are often exposed to higher climate risks. Research by the World Bank has established that with­out action, climate change could result in a further 100 million people living in poverty by 2030. Given rapid urban growth and climate change, how can cities ensure that their most vulnerable citizens are protected from and prepared for climate change? How can cities account for the varying impacts of climate change across diverse neighborhoods and social groups?

This paper introduces the Urban Community Resilience Assessment (UCRA) as a tool for city planners to measure differentiated needs for climate resilience through a territorial approach in cities. UCRA was developed by WRI in collaboration with the Brazilian municipal governments of Porto Alegre and Rio de Janeiro. The premise is that measuring how communities and individuals have responded to potential climate risks can help identify needs for resilience and inform effective urban resilience planning. Brazil has a high urbanization rate, where 85 percent of the population currently lives in cities. UCRA was piloted in low-income and vulnerable communities in both cities, and this paper describes the pilot project results, insights, and the potential for UCRA to be applied in other cities. This publication is part of WRI’s wider work _Urban Com­munity Resilience. _In addition to the pilots described in this paper, UCRA is currently being applied in the cities of Surat (India) and Semarang (Indonesia) as part of a wider effort to improve the UCRA framework, render it more operational, and deepen our understanding of how to strengthen urban community resilience.

In recent years, there has been a proliferation in the development of tools that measure urban resilience. This development has come in response to the rise of urban climate resilience on international policy agendas such as the UN New Urban Agenda and the Paris Agreement. The first Brazilian cities to be part of the 100 Resilient Cities network—Porto Alegre and Rio de Janeiro—expressed their interest in understanding how resilience can differ between and within neighbor­hoods. Both cities partnered with WRI to develop a tool that could capture resilience elements at multiple levels: the wider urban area, key social aspects of communities, and the capacities of individuals. The UCRA framework was developed to assess differential needs and risks at the neighborhood level. To pilot the tool, it was implemented in vulnerable communities at risk of climate change in both cities through participatory processes (which are detailed in the methodology). Data were collected through 400 household surveys in each city. The aim was to provide a snapshot of community and individual resil­ience and explore whether the framework could provide insights that would be useful to urban planners. Figure ES-1 provides an overview of the three aspects of the framework—vulnerability context, community resilience, and individual capacity—and the indicators developed to measure resilience within those aspects.

Cities should seize opportunities to support posi­tive behavior change by encouraging residents to develop habits that increase their resilience to extreme climate events.