This paper discusses the results of a study in Bangalore, India where behaviorally designed household energy reports helped reduce energy use by 7 percent among participating households. While this concept of using energy reports to impact behavior is not new in the Global North, its use in India reveals that these insights may have more universal, and underused, applications. 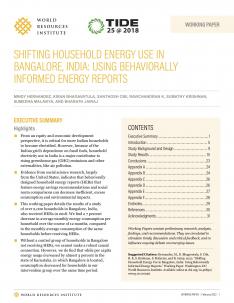 This Working Paper was produced by WRI India and The Living Lab for Equitable Climate Action, an initiative under WRI's Climate Program and Economics Center.

This Working Paper was produced by WRI India and The Living Lab for Equitable Climate Action, an initiative under WRI's Climate Program and Economics Center.

From an equity and economic development perspective, it is critical for more Indian households to become electrified. However, because of the Indian grid’s dependence on fossil fuels, household electricity use in India is a major contributor to rising greenhouse gas (GHG) emissions and other externalities, like air pollution.

This working paper details the results of a study of over 2,000 households in Bangalore, India, who received HERs in 2018. We find a 7 percent decrease in average monthly energy consumption per household over the course of 12 months, compared to the monthly average consumption of the same households before receiving HERs.

Without a control group of households in Bangalore not receiving HERs, we cannot make a robust causal connection. However, we do find that while per capita energy usage increased by almost 3 percent in the state of Karnataka, in which Bangalore is located, consumption decreased for households in our intervention group over the same time period.

If this scale of energy-saving effect were confirmed, a HER intervention scaled up to the city of Bangalore could save households almost US$60 million per year and help avoid emissions from the generation of 604 million kilowatts of electricity, compared to the case of normal billing.

Is Behavioral Science the Secret Ingredient for Effective Climate Action?