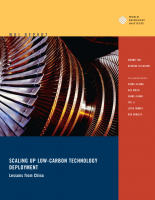 Among the issues domestic and international policymakers must address in combating climate change is how to deploy and diffuse current low-carbon technologies in developing countries.

Developing countries, while bearing little responsibility for historical releases of greenhouse gases (GHG), now account for an increasingly large percentage of global atmospheric emissions. Today, they make up around 50 percent of emissions (CAIT 2005) and by 2030 this figure will rise to 65 percent (EIA 2009). Thus, without widespread deployment of low-carbon technologies in China, India, and beyond, global efforts to stabilize emissions and prevent dangerous levels of warming will be severely undermined.

China’s leadership and approaches The speed and scale of technology deployment is highly correlated with income level. Despite being a lower-middleincome country, China has bucked this trend, boasting technological achievements greater than those of many high-income countries. In particular, China’s government has poured money, R&D resources, and a combination of incentives and regulatory levers, into developing and deploying technologies in the cleaner energy (such as supercritical/ultrasupercritical coal-fired power generation), renewable energy, and energy efficiency sectors. It has also invested in a range of partnership models with overseas governments and companies, including joint ventures, licensing agreements, and joint design. As a result, China has transformed itself over the past two decades from a low-carbon technology importer to a major manufacturer of a number of low-carbon technologies.

Scaling Up Low-Carbon Technology Deployment: Lessons from China examines how low-carbon technologies have been introduced, adapted, deployed, and diffused in three greenhouse gas-intensive sectors in China. By focusing on key policy and program drivers, the report identifies the building blocks for China’s successful low-carbon technology deployment infrastructure. Its purpose is twofold: to draw lessons of use in informing broader international cooperation on technology transfer and deployment; and to help governments and industries in middle- and low-income countries to pursue an effective transition to a low-carbon economy.

Why these particular technologies? First, all three if widely deployed could make a significant dent in emissions of carbon dioxide, the main greenhouse gas. As the power and steel sectors are major global energy consumers, efficiency improvement in these sectors entails large carbon dioxide reduction. Wind, the fastest growing renewable energy source, is the most likely renewable technology to capture a big share of the global electricity mix. Coal will likely remain a key global energy provider for decades to come. Second, these three technologies present diverse opportunities for future deployment both in China and internationally. Such diversity enables the lessons contained in this report to address issues across a broad spectrum of low-carbon technology deployment— thus maximizing its potential impact.

China’s preference for domestically manufactured technologies can present a competitive risk for foreign companies seeking a foothold in China. However, in practice, depending on the technology investors’ own conditions and needs, foreign technology providers can make a profit through various approaches, including:

For other countries who are adapting technology:

Other countries might lack the tremendous scale of resources for domestic investment in R&D that China can bring to bear, but China’s experience demonstrates some clear successes from which other countries can benefit. These include: the active role of the government in pursuing bilateral engagement internationally (in the case of steel); the importance of providing clear and lasting policy signals for clean energy markets (in the case of wind); and the central role that government-funded R&D can play (as illustrated by the localization of all three technologies).

China's Overseas Investments in the Wind and Solar Industries