The Scale of Illicit Trade in Pacific Ocean Marine Resources 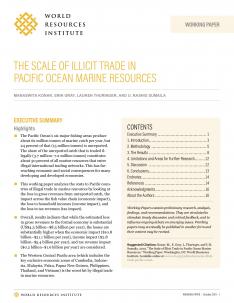 The paper quantitatively determines the impacts from illicit trade in marine resources the Pacific Ocean. The purpose of the analysis is to inform the country engagement at APEC in November and motivate action on illegal, unreported and unregulated fishing (IUU). The volume of unreported marine catch that is illegally traded in the Pacific Ocean is estimated to be 3.7 million to 7.2 million tonnes per annum. The loss in gross revenues to the formal economy from illegal trade is estimated to be $4.3 billion to $8.3 billion annually. In terms of economic impact, defined as the added value through the fish value chain generated from the revenues earned from fishing, the region is estimated to be losing nearly US$10.8 billion to US$21.1 billion every year.