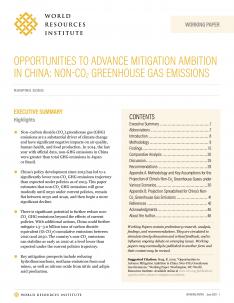 Non–carbon dioxide (CO2) greenhouse gas (GHG) emissions are a substantial driver of climate change and have significant negative impacts on air quality, human health, and food production. In 2014, the last year with official data, non-GHG emissions in China were greater than total GHG emissions in Japan or Brazil.

There is significant potential to further reduce non- CO2 GHG emissions beyond the effects of current policies. With additional actions, China could further mitigate 1.5–3.0 billion tons of carbon dioxide equivalent (Gt CO2e) cumulative emissions between 2020 and 2030. The country’s non-CO2 emissions can stabilize as early as 2020 at a level lower than expected under the current policies trajectory.

Full executive summary in the paper.