Moving the Green Belt and Road Initiative: From Words to Actions 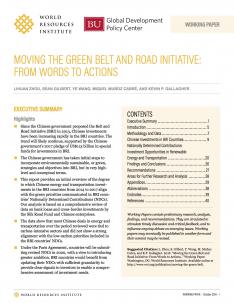 China’s Belt and Road Initiative (BRI) is investing in projects developing infrastructure worth $6 trillion across many of the world’s fastest-growing economies. The Chinese government has taken initial steps to incorporate environmentally sustainable, or green, strategies and objectives into the BRI. However, our review finds that most bank loans and cross-border investments in energy and transportation over 2014-2017 were tied to fossil fuel projects.

Aligning these investments with Nationally Determined Contribution plans expressed by BRI countries provides a massive opportunity for financing low-carbon development. We provide guidance on how this might be done, as well as suggestions for countries that could make it easier to facilitate low-carbon investments in their economies.

Will China Seize the Biggest Green Opportunity of the Coming Decade?