Our paper studies the design and performance of three schemes Suryashakti Kisan Yojana (SKY) in Gujarat, Surya Raitha Scheme in Karnataka, and the Solar BLDC Pump Pilot in Andhra Pradesh—that predated the launch of KUSUM’s Component C in Tamil Nadu. The objective of this paper is to highlight the learnings from the schemes in these three states, which could prove useful to stakeholders in Tamil Nadu, especially discoms and the state’s Renewable Energy Development Agency in the lead-up to operationalizing Component C. 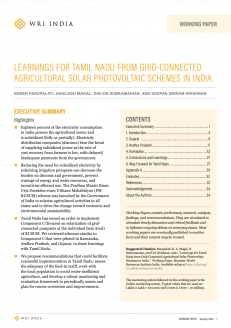 This Working Paper is part of the Sustainable Energy Transformation in Tamil Nadu project within the Energy Program. Contact Deepak Sriram Krishnan and Sandhya Sundararagavan for more information.

This Working Paper is part of the Sustainable Energy Transformation in Tamil Nadu project within the Energy Program. Contact Deepak Sriram Krishnan and Sandhya Sundararagavan for more information.

Eighteen percent of the electricity consumption in India powers the agricultural sector and is subsidized (fully or partially). Electricity distribution companies (discoms) bear the brunt of supplying subsidized power as the rate of cost recovery from farmers is low, with delayed/ inadequate payments from the government.

Raising financial contributions from farmers was a major challenge across all states. As mentioned earlier, these were subsequently taken up by the state. Winning the confidence of farmers in solarization was challenging considering the politics around metering of irrigation pumpsets. Another challenge was the lack of confidence in solarized pumpsets due to observation of poor or failed experiences with earlier attempts to deploy off-grid solar PV pumpsets. Monitoring and evaluation (M&E) of the scheme was a challenge due to non-standardization of the equipment and the lack of training given to farmers to read the meters. In the case of Karnataka in particular, one of the major challenges was the selection of the wrong target region to implement the scheme. The Harobele region, which falls under the Arkavathy river/dam area, has no groundwater scarcity and belongs to the water-intensive sericulture belt, where the value generated by irrigation is high. The FiT offered to the farmers through the scheme was, therefore, not enough for farmers to change their water extraction patterns.