Electricity Transmission Infrastructure and its Impact on the Renewable Energy Market 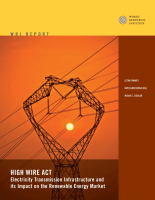 This report examines electricity transmission developments and challenges for renewable energy in the European Union (EU), China, and the United States.

The transmission challenges impacting RE investment in China, the EU, and the United States have some commonality but occur in three unique regulatory and governance landscapes that establish different incentives and roadblocks to reform. Financing new or upgraded transmission capacity faces the difficult task of allocating cost across users (RE generators, power consumers in various jurisdictions, and society broadly) while ensuring low-cost energy and profitable business models that attract private investment. In all three markets examined, transmission planning and siting is primarily constrained by ongoing tension between national (or in the case of Europe, pan-European) interests and local, state, and member-state interests. In all cases, unlocking greater RE potential through improved transmission is highly dependent on government and regulatory decisions that try to steer through these challenges.

The European Union uses a mix of private and public investment for grid development, has aggressive targets for developing renewable energy, and is making progress toward those goals. It is also using Directives and other policy tools to push member states to integrate their grids and make the necessary technical and policy changes for cross-border transmission that will allow the flow of renewable energy. The challenges to reaching these objectives can be seen in the still fragmented planning processes and the resistance of member states to fully integrate, making the EU efforts a work in progress. Member states also currently retain the authority to determine whether projects will have a net benefit or cost to domestic customers, and thus to thwart crossborder objectives that do not yield enough local benefit.

China has aggressive plans to continue the grid spending surge of the past five years in an effort to keep pace with growing electricity generation. The central government is planning for a likely doubling of electric power generation capacity by 2020 (from 2009 levels), driven by a large increase in electricity demand. Wind farms that are largely located in northwest China, where grid coverage is currently sparse, will provide a large part of anticipated new renewable energy. China recognizes the compelling need to transfer energy from such remote locations conducive to wind and solar generation to its growing megacities and is focusing on new approaches such as investing in ultra high voltage (UHV) transmission research.

Despite a clear commitment to renewable energy, China faces several challenges when integrating RE into the grid, including a lack of connection standards for generators to follow, uncoordinated build-out of new generation, inflexible dispatching, and a lack of financial incentives for grid operators to take up RE power. The central government attempted to resolve several of these issues through the 2009 amendments to the Renewable Energy Law, but it will take time for the effects to be widely felt.

Even more so than the other two markets, United States electricity generation and transmission planning and siting are managed in a highly local and fragmented manner. Renewable energy goals are currently set by states, rather than by the federal government, complicating broader regional planning for renewable electricity generation and supporting transmission. Whether the 112th Congress will set national goals, move transmission siting responsibility (in whole or in part) from states and local authorities to the federal government, or facilitate multi-state transmission project approvals is highly uncertain after the power shift during the 2010 midterm elections.

Renewable energy (RE)—electricity from wind, solar, and other naturally renewing energy sources— has drawn increasing attention in the quest to reduce greenhouse gases on a scale commensurate with the dictates of climate science. Renewables have the potential to substitute for a significant proportion of the conventional fossil fuels prevalent in today’s electricity generation. However, two key features of renewable energy complicate this promise. First, renewable energy resources are location constrained and often available only in remote areas. Their energy must therefore be transported via connected transmission lines (the grid) to demand centers, such as cities. Second, because RE resources are typically intermittent, this energy must be stored or managed with other generation sources to provide a stable and reliable service to consumers. One effective way to address this intermittency is widespread interconnection to diverse resource areas so that low production in one location can be balanced by high production in another. These two important attributes, location-constrained generation and intermittency, mean that transmission is critical to unlocking the promise of renewable energy.

This paper examines transmission developments and challenges in the European Union (EU), China, and the United States—three regions that present entirely different pictures in terms of governance structures, institutions, and traditions for making decisions about transmission.

Transmission infrastructure can be either a roadblock or an enabling technology for meeting renewable energy deployment goals and thus presents a poorly understood risk to RE investment. To provide context for renewable energy investors, this report examines the policy challenges of providing transmission to:

Transmission siting and construction in general may be marginally easier to approve in the EU than in the United States; therefore, RE expansion may be more likely if the current European cooperative efforts succeed on schedule by 2014. This will depend on whether the controlling nature of the relevant EU directives and policies can prevail over local interests in practice. The potential generation that could be unlocked through transmission expansion in the United States and China may, however, be relatively greater, due to the large domestic tracts of land with significant RE generation potential that are currently inaccessible because of transmission constraints.

These opportunities could prove tougher to capture in the United States as a result of difficult-to-resolve regulatory and political uncertainties. If reform efforts bring greater certainty to the United States, investors will be able to respond and shape renewable energy projects accordingly. Even if not all roadblocks are addressed with legislation or regulatory reform, any increase in certainty regarding transmission siting coordination, cost allocation, and national energy policy would unlock new potential in the United States. Perhaps the market most likely to remove transmission barriers and unlock the real potential of RE is China, as the central government methodically works to reform transmission to support its national renewable energy goals. China faces primarily technical and capacity barriers rather than the paralyzing political debate seen in the United States. China’s future market depends on its ability to overcome the resistance of grid companies in a regulatory environment that at least appears more opaque than those in the United States or EU.