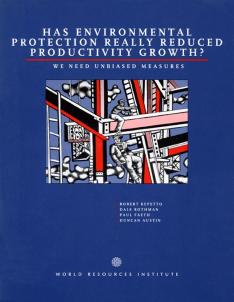 The state of the economy always becomes an election year issue, but misleading government statistics make meaningful debate almost impossible. Productivity gains in private industry over the past two decades have been understated by a full one-third. Even more surprisingly, the source of these hidden gains is none other than much-maligned environmental regulation.

The new World Resources Institute study -- Has Environmental Protection Really Reduced Productivity Growth? We Need Unbiased Measures -- builds a convincing case that government statistics on productivity ignore the fact that factories have cleaned up and become more efficient in response to regulation. Electric utilities now produce twice as many kilowatt hours per ton of emissions as they did when the Clean Air Act was passed in 1972. The pulp and paper industry produces seven times as much paper per ton of water pollution as it did before the Clean Water Act was passed. Such efficiency gains boost productivity by reducing the cost of pollution on health, materials, forests and crops. Over the past two decades, they have far outpaced modest improvement in output per worker or output per unit of capital investment.

In the United States and other industrialized countries where productivity is a sacred economic icon, unbiased indicators are especially important. Managers care about productivity because when it goes up, the message is that their firm is able to compete with others and its profitability is improving. Workers care about it because it justifies wage increases. Economists care because productivity growth accelerates economic expansion. Yet the way productivity growth has been measured fundamentally misrepresents the industrial process and inevitably tells us that environment protection reduces productivity. In fact, such hidden gains confirm that environmental improvement and economic progress can go together.