Getting Specific on the 2015 Climate Change Agreement

Suggestions for the Legal Text with an Explanatory Memorandum 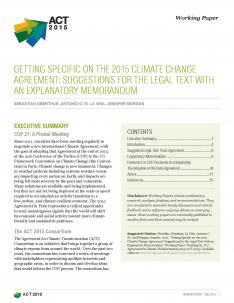 Getting Specific on the 2015 Climate Change Agreement: Suggestions for the Legal Text with an Explanatory Memorandum offers a set of ideas for what the international agreement could look like in legal terms and therefore serves as a reference tool for decision-makers on the road to Paris.

Since 2011, countries have been meeting regularly to negotiate a new international Climate Agreement, with the goal of adopting that Agreement at the end of 2015, at the 21st Conference of the Parties (COP) to the UN Framework Convention on Climate Change (the Convention) in Paris. Climate change is now imminent. Changes in weather patterns including extreme weather events are impacting every nation on Earth, and impacts are being felt most severely by the poor and vulnerable. Many solutions are available and being implemented, but they are not yet being deployed at the scale or speed required to accomplish an orderly transition to a low-carbon, and climate-resilient economy. The 2015 Agreement in Paris represents a critical opportunity to send unambiguous signals that the world will shift its economic and social activity toward more climate-friendly and sustainable pathways.

The Agreement for Climate Transformation (ACT) Consortium is an initiative that brings together a group of climate experts from around the world.1 Over the past two years, the consortium has convened a series of meetings with stakeholders representing multiple interests and geographic areas, in order to discuss and develop ideas that would inform the COP process. The consortium has also undertaken research and analysis to support these discussions. The result of this work is a suggested legal text for the 2015 Paris Agreement, which, it is hoped, will provide valuable input for consideration by stakeholders in the run-up to the meeting.

The suggested legal text takes account of the current negotiating text developed by the Ad Hoc Working Group on the Durban Platform for Enhanced Action (ADP), but it goes further in attempting to reconcile many different viewpoints and strike a balance that will contribute to the development of a final Agreement that is fair, equitable and effective in realizing the goals of the Convention. The purpose of the suggested legal text is to provide ideas for the consideration by Parties.

The suggested legal text recognizes the intimate connections between mitigation, adaptation and support. It promotes a more holistic approach that reinforces the links among the three issues, and moves away from an approach centered only on mitigation. The approach is represented graphically below in figure 1. 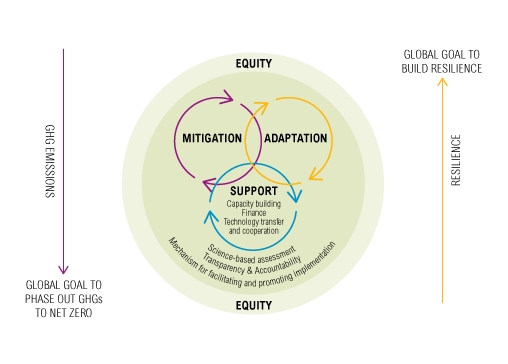 In order to provide clear signals to government, the private sector, and the public that the low-carbon economy is not simply desirable, but unavoidable, the suggested legal text calls for the following:

Implementation of each of these goals would be based on “common but differentiated responsibilities and respective capabilities, in light of different national circumstances.” One interpretation of this could be different phase-out timeframes for developed and developing countries.

The suggested text establishes three five-year cycles related to mitigation, adaptation and support. The cycles are intended to provide predictability by regularly assessing and strengthening countries’ actions to reduce emissions, adapt to climate change, and support low carbon growth in a manner that is fair, equitable and just:

The suggested legal text prepared by the consortium recognizes that, even with greatly enhanced global efforts on mitigation and adaptation, the adverse impacts of climate change, including extreme weather events and/ or slow-onset events such as sea-level rise, are likely to cause loss and damage in some regions. The text therefore suggests that the Warsaw International Mechanism for Loss and Damage associated with Climate Change Impacts under the Convention should serve as the platform, under the 2015 Paris Agreement, for enhanced cooperation on loss and damage. Its work shall be accelerated and also be regularly reviewed, starting with the outcome of the review of the mechanism in 2016.

Countries that wish to go further faster are enabled to join together in joint agreements around specific issue areas. Cooperative actions can involve the participation of non-state actors as appropriate. Relevant international organizations and expert bodies outside the Convention are encouraged to take action in line with achieving the long-term mitigation and adaptation goals.

In order to ensure credibility and enhanced transparency, the suggested legal text calls for transparency and accountability to be enhanced as follows:

The full text of the suggested legal text developed by the ACT 2015 consortium can be found after the introduction, below. It is accompanied by an explanatory memorandum that provides additional information on the aims and operation of the proposals presented in the legal text. It is also provided separately in an annex for reference.

Elements and Ideas for the 2015 Paris Agreement