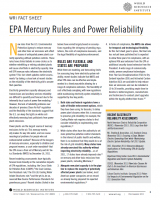 New rules from the U.S. Environmental Protection Agency to reduce mercury and other toxic air emissions will affect dozens of antiquated power plants currently operating without pollution controls. These rules have stirred debate in some circles as to whether retrofitting or retiring outdated plants will cause shortfalls in electricity capacity. How will EPA mercury rules influence the electricity system? This fact sheet updates earlier assessments by taking a close look at recent studies on the reliability of the electricity grid to answer that question.

Rules Are Flexible, and States Are Prepared

While there are modeling and forecasting limits for assessing long-term electricity system reliability, recent studies indicate that MATS and other EPA rules can be effective and implemented in a timely way while allowing for a range of compliance outcomes. The feasibility of cost-effectively complying with new regulations while maintaining electricity system reliability is supported by four key points:

Electricity generation capacity adequacy and transmission and ancillary services reliability are difficult to quantify and forecast due to the inherently local scale of power flow modeling. However, the lack of reliability problems over decades of previous Clean Air Act regulation and the flexibility of the standards suggest that the U.S. can keep the lights on while cost effectively removing toxic pollutants from power plant emissions.

Power plants are the largest source of mercury emissions to the air. This mercury eventually makes its way into water, and can cause neurological problems for people who eat contaminated seafood. Because of the dangers of mercury emissions, especially to children and pregnant women, a court order mandated that the EPA issue a final set of Mercury and Air Toxics Standards (MATS) by December 16, 2011.

Recent modeling assessments have typically focused more broadly on the cumulative impacts of EPA regulations, including: the Cross-State Air Pollution Rule (CSAPR), the Coal Combustion Residuals rule, the 316 (b) Cooling Water Intake Structures rule, and the yet-to-be announced New Source Performance Standards for greenhouse gases. Recent studies have varied largely based on assumptions regarding the stringency of pending regulations, the costs of compliance measures, and the legal flexibility of regulatory enforcement.