Encroaching on Land and Livelihoods: How National Expropriation Laws Measure Up Against International Standards 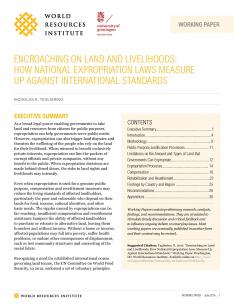 Encroaching on Land and Livelihoods examines whether national expropriation laws in 30 countries across Asia and Africa follow the international standards established in Section 16 of the Voluntary Guidelines on the Responsible Governance of Tenure of Land, Fisheries, and Forests in the Context of National Food Security (VGGTs). Section 16 of the VGGTs establishes standards on expropriation, compensation, and resettlement to ensure tenure security and responsible land governance. The UN Committee on World Food Security officially endorsed the VGGTs in 2012. Private companies, governments, NGOs, and other stakeholders are increasingly accepting the VGGTs as a new international standard on land tenure.

As a broad legal power enabling governments to take land and resources from citizens for public purposes, expropriation can help governments serve public needs. However, expropriation can also trigger land disputes and threaten the wellbeing of the people who rely on the land for their livelihood and wellbeing. When misused to benefit exclusively private interests, expropriation can line the pockets of corrupt officials and private companies, without any benefit to the public. When expropriation decisions are made behind closed doors, the risks to land rights and livelihoods may intensify. Even when expropriation is used for a genuine public purpose, compensation and resettlement measures may reduce the living standards of affected landholders, particularly the poor and vulnerable who depend on their lands for food, income, cultural identities, and other basic needs. The ripples caused by expropriations can be far-reaching: insufficient compensation and resettlement assistance hampers the ability of affected landholders to purchase or relocate to alternative land, leaving them homeless and without income. Without a home or income, affected populations may fall into poverty, suffer health problems, or endure other consequences of displacement, such as lost community structures and unraveling of the social fabric.

Recognizing a need for established international norms governing land tenure, the UN Committee on World Food Security, in 2012, endorsed a set of voluntary principles known as the Voluntary Guidelines on the Responsible Governance of Tenure of Land, Fisheries, and Forests in the Context of National Food Security (VGGTs). The VGGTs establish best practices that “are backed by international consensus of governments, international NGOs, civil society, and the private sector.”  Section 16 of the VGGTs establishes standards on expropriation, compensation, and resettlement.

The 24 expropriation indicators are designed to align with the principles established in Section 16 of the VGGTs. They ask yes or no questions about the legal provisions established in expropriation laws. (“Partial” is an answer option where laws only partially satisfy the question asked by the indicator.) Answering the questions posed by these indicators entailed reviewing a broad range of legally binding instruments, including national constitutions, land acquisition acts, land acts, communal land acts, agricultural land acts, land use acts, regulations, and court decisions.