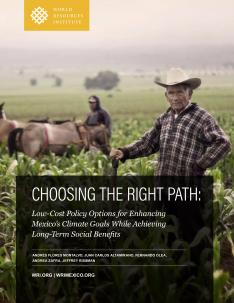 New WRI analysis indicates that Mexico can save more than 25,000 lives and $5 billion in public health costs over the next 12 years by aggressively pursuing policies and actions that reduce air pollution and the greenhouse gas emissions that cause global warming.

Addressing three sectors – electricity, transport and industry – will get more than three-quarters of the mitigation needed to achieve Mexico’s commitments under the Paris Agreement.

The report identifies a mix of 21 policy levers with which it would be possible to achieve Mexico’s conditional nationally determined contribution (NDC) at an average cost of US$12/ton. The report addresses both current targets, included in Mexico’s unconditional and conditional NDC to the Paris Agreement, as well as a more ambitious long-term target defined by Mexico in the General Climate Change Law in line with a 2°C global warming goal.

Even if its NDC commitments were achieved, Mexico would not be on track to achieve its long-term strategy emissions abatement goal. Thus, our analysis calls for higher ambition in Mexico’s climate objectives and actions.