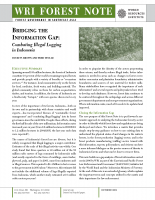 This Forest Note puts forward a systematic approach to analyzing the Indonesian forestry sector in order to identify which forest laws and regulations are being disobeyed and where.

Spanning around 100 million hectares, the forests of Indonesia constitute 10 percent of the world’s remaining tropical forests and provide people with a variety of benefits or “ecosystem services.” For instance, local communities rely on the forests for food, medicine, fresh water, and building material. The global community relies on them for carbon sequestration, timber, and tourism. In addition, the forests of Indonesia are a biodiversity “hotspot,” with new species discovered every year.

In view of the importance of its forests, Indonesia—both on its own and in partnership with donor countries and world experts—has incorporated themes of “sustainable forest management” and “combating illegal logging” into its forest governance since the mid-1990s. Despite these efforts, during the first half decade of the new millennium, deforestation rates increased year on year (from 0.2 million hectares in 2000/2001 to 1.2 million hectares in 2004/2005, the last year such data were reported).

The causes of Indonesia’s forest loss are diverse, but it is widely recognized that illegal logging is a major contributor. Estimates of the scale of this illegal activity vary widely. One study found that three quarters or 40 million out of the 53 million cubic meters of logs consumed by Indonesia’s mills (and mostly exported in the form of moldings, sawn timber, plywood, pulp, and paper) in 2003, came from unknown and/ or illegal sources. This equated to $1.4 billion in lost revenue to the government in 2003 alone. Moreover, this estimate did not include the additional volume of logs illegally exported from Indonesia, which another study estimated at 10 million cubic meters per year.

In order to pinpoint the identity of the actors perpetrating these crimes, and thereby reduce illegal trade, better information is needed in areas such as: changes in forest cover; timber concession and plantation boundaries; administrative boundaries; and sources of raw material for timber mills. Many stakeholders have recognized the importance of such information and several experts and policymakers have tried to develop such databases. However, forest data continues to be scattered throughout the archipelago and across different government departments and non-government organizations. Where information exists, much of it needs to be updated and improved.

The core purpose of this Forest Note is to put forward a systematic approach to analyzing the Indonesian forestry sector in order to identify which forest laws and regulations are being disobeyed and where. We introduce a matrix that provides simple step-by-step guidance on how to use existing data to understand the physical status of and changes in the nation’s forests, in the forest production (logging) sector, and in the forest products manufacturing (milling) sector. Armed with this information, experts, policymakers, and citizens can have a more informed dialogue on the precise sources of threats to Indonesia’s forests and what can be done to remove them.

This note builds on a gap analysis of forest information carried out in 2006 by WRI as part of the East Asia and Pacific Forest Law Enforcement and Governance (EAP-FLEG) initiative led by the World Bank and the Indonesian Ministry of Forestry. At the end of this note is an extended glossary, which explains the important terms and concepts utilized in the matrix and their importance for law enforcement.

Putting the Pieces Together for Good Governance of REDD+