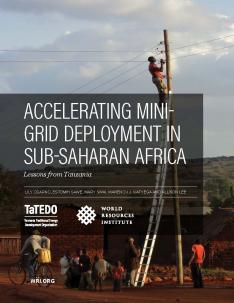 For communities across sub-Saharan Africa, a consistent and affordable supply of electricity can open new possibilities for socioeconomic progress. Mini-grids—electrical generation and distribution systems of less than 10 megawatts—can play a role. These decentralized technologies are expected to bring power to 140 million Africans by 2040.

Tanzania is a regional leader in mini-grid development. In 2008, it adopted a groundbreaking mini-grid policy and regulatory framework to encourage investment in the sector. Since then, the number of mini-grids in the country has doubled. The national utility (TANESCO), private businesses, faith-based organizations, and local communities now own and operate more than 100 mini-grid systems. Energy leaders across the region can learn from the country’s experience.

This report is the first major survey of Tanzania’s mini-grid sector. In it, we shed light on lessons from Tanzania that can help accelerate mini-grid deployment across countries in sub-Saharan Africa. This comprehensive study will be valuable to the large and growing community that is banking on mini-grids to transform energy access in Africa.

Tanzania has at least 109 mini-grids, with installed capacity of 157.7 MW (exact figures are not known, because some small systems may not have registered). They serve about 184,000 customers. Sixteen of these plants are connected to the national grid; the remaining 93 operate as isolated mini-grids. Not all the installed capacity goes to customer connections; some is sold to the national utility, the Tanzania Electric Supply Company (TANESCO).

Hydro is the most common technology (49 mini-grids), although the 19 fossil fuel systems account for 93 percent of customer connections and almost half of total installed capacity. Tanzania has 25 biomass mini-grids; and 13 solar mini-grids (10 of them small donor-funded, community-owned demonstration projects). There are no wind mini-grids in Tanzania.

The number and installed capacity of mini-grids in Tanzania has nearly doubled since 2008, when the government introduced the small power producers (SPP) framework. Fifty-two mini-grids were commissioned between 2008 and 2016 and more than 67 MW of new capacity installed.

The first-generation feed-in tariff favored hydro and biomass plants, because it failed to recognize cost differences of different technologies. Some investors signed agreements with TANESCO to build solar and wind mini-grids, but they were not built, because the feed-in tariffs did not reflect the costs of solar and wind generation.

In 2015 the national utility regulator revised the 2008 SPP framework in a way that helps support solar and wind mini-grids and encourages greater participation by the private sector. Drawing on lessons from the first-generation framework, the Energy and Water Utilities Regulatory Authority (EWURA) introduced a more flexible tariff-setting system that differentiates between fixed feed-in tariffs (according to size category) for hydro and biomass and introduced a competitive bidding process for solar and wind plants larger than 1 MW. Smaller wind and solar producers that want to sell to TANESCO are not subject to competitive bidding. Despite the new framework, as of 2016 no solar or wind agreements had been implemented.

Three other important changes were also made to encourage private sector participation in the mini-grid market:

Mini-grid owners and operators in Tanzania include the national utility, private commercial entities, faith-based organizations, and communities. Fossil fuel mini-grids owned and run by TANESCO all operate on the utility model. The same nationwide tariffs that TANESCO charges its grid-connected costumers apply to its mini-grid customers. Private entities usually sell power to TANESCO and to retail customers. Mini-grids developed by faith-based organizations have been successful operationally, but few are financially self-sufficient. Community models have had mixed success.

Acquiring clearances and registrations from multiple institutions in the project development process is cumbersome and can slow project development. The SPP framework streamlined the licensing and tariff-setting procedures with the national energy regulator, but the planning process for mini-grids remains complicated. A typical mini-grid project may involve up to 13 steps from inception to commissioning. Clearances and decision-making processes involve multiple institutions outside the energy sector; some regulatory procedures (such as obtaining environmental clearances) can require many months. Streamlining regulatory clearance procedures that lie outside the purview of the energy sector will be important to ensure a smooth planning process for mini-grids.

Securing financing for mini-grid development is challenging, partly because of the inherent weaknesses of mini-grid financial models and partly because of risk perceptions. The government, supported by development partners, has created financial mechanisms to address bottlenecks in the project development process. Under the World Bank–supported Tanzania Energy Development and Access Project (TEDAP), the Tanzania Rural Energy Agency (REA) offered matching and performance grants to mini-grid projects. The World Bank also established a $23 million credit line to the government-owned Tanzania Investment Bank for on-lending to local commercial banks as 15-year loans. Although a few projects have used this arrangement to fund construction, most developers have been unable to access these loans. Other international donors have supported mini-grid development activities through the Tanzanian government, but developers remain wary of the unknown risks of investing in mini-grids.

Local commercial banks have been hesitant to offer credit facilities to local mini-grid developers. Most mini-grid developers in Tanzania that obtained local finance were foreign-owned businesses. Commercial banks cite the limited availability of funds and the poor quality of documentation submitted by local developers as reasons for not extending credit to local actors. Bank financing is likely to remain limited unless financial risk guarantees are provided.

Five recommendations emerge from this report:

Strategies for Expanding Universal Access to Electricity Services for Development