This practice note examines how climate change is threatening coffee-growing regions in Costa Rica, specifically the Coto Brus region. By 2050, absent adaptation measures, experts project that climate change will reduce the global areas suitable for growing coffee by about 50% (Bunn et al. 2015). The case study outlines key findings from this region, including main challenges and existing factors that present opportunities to enhance climate resilience, and recommends actions that key sectoral actors can take to improve the sector’s climate resilience and long-term sustainability.

Based on a literature review, interviews, a workshop and field visits with coffee farmers, government ministries, funders, and other stakeholders, this case study identified six key recommendations to increase the short-, medium-, and long-term climate resilience of the coffee sector. These are: promote promising adaptation options identified by stakeholders such as diversifying incomes of farmers and replanting farms with climate-resilient coffee varieties, with regular technical follow-up; establish baselines and monitor the impacts of adaptation measures; map out when and where coffee may no longer be viable in the coming decades, and how to support those farmers who may need to shift away from coffee; develop farmer-tailored business education; and expand peer-to-peer learning between farmers.

Despite the case study’s local focus, the lessons and experiences shared in this paper are relevant for other coffee-growing regions and countries ̶ Colombia, Mexico, Guatemala, Honduras, Vietnam, Indonesia, Ethiopia, Uganda, and others ̶ where coffee producers are facing the effects of climate change, and hope that it will serve as a tool and inspiration for accelerating adaptation action. 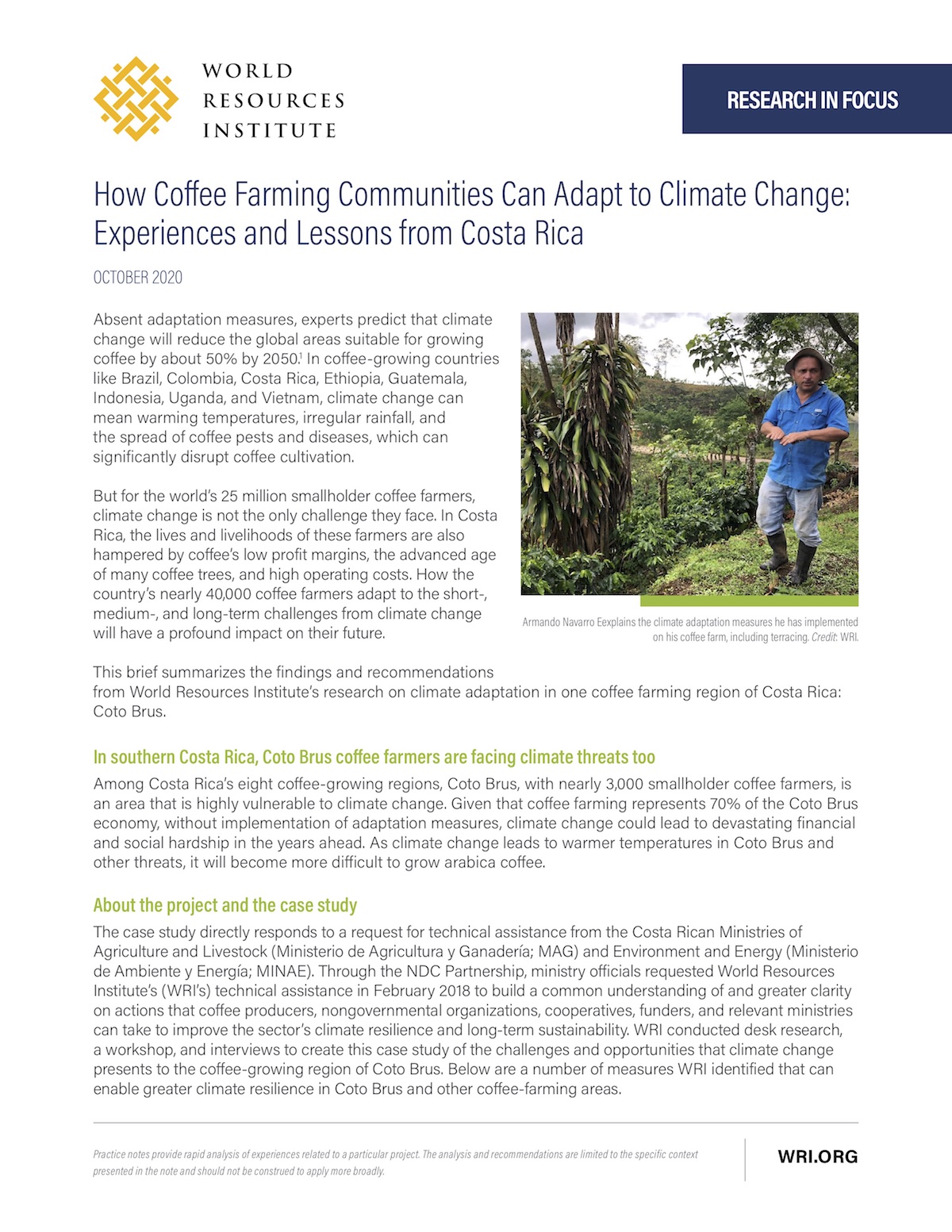 Research In Focus: How Coffee Farming Communities Can Adapt to Climate Change: Experiences and Lessons from Costa Rica

WRI applied the framework it developed in Transforming Agriculture for Climate Resilience: A Framework for Systemic Change (Carter et al 2018) to assist Costa Rica in mapping out short-, medium-, and long-term adaptation pathways that are inclusive, equitable, and participatory. The framework underscores that, in some situations and locations, incremental adaptation measures will prove insufficient in the years to come to fully reduce growing risks from climate change impacts. In these situations, more fundamental, or transformative, changes—which may entail creating pathways toward new systems more suitable for changing climate conditions—will be needed to maintain the communities’ livelihoods in the long term. Such changes will often include shifting the mix of crops grown and livestock raised in particular areas, employing substantially new technology at broad scale, and/or altering the production landscape from one type to another.

The first year of technical assistance focused on stakeholder engagement, research, and in-country discussions via workshops to introduce the concept of transformative adaptation and establish a dialogue on climate adaptation, vulnerabilities, and impacts. These discussions were held with coffee producers, cooperatives, ministry officials, research organizations, financing entities, and the private sector, among others. Findings from these conversations would serve to inform MAG’s Coffee Program, with the additional aim of being used to inform the drafting of a national coffee strategy. The first year included a blog post to showcase transformative adaptation in action1 and culminated in a final internal report shared with ministry counterparts.

The focus of the second year of the project reflects MAG and MINAE’s desire to share the challenges and lessons learned from the coffee-growing region of Coto Brus to better inform, guide, and finance climate resilience efforts for these communities, while extracting insights for other coffee-growing regions in the country.

The Coto Brus district, located in the Brunca region, is one of the country’s eight coffee-growing areas identified by the Coffee Institute of Costa Rica (Instituto del Café de Costa Rica; ICAFE) and one of the smallest contributors to national production. Coto Brus was chosen by government counterparts in response to smallholder farmers’ requests for support and because this area has been experiencing a rapid decline in coffee production and is highly vulnerable to climate change. In the second year, WRI conducted literature reviews, expert interviews, farm visits, and a full-day workshop in Coto Brus with key stakeholders.