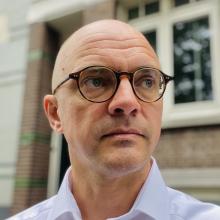 Van den Berg is an urban planning and urban development specialist, architect, former entrepreneur and academic who most recently led UN-Habitat’s Urban Lab, which he set up in 2014. It was created to respond to urban planning demand in cities, and rapidly expanded its scope to become a multidisciplinary urban project and integrated planning facility working in 80 cities globally. Van den Berg led global teams working at the intersection of infrastructure, urban planning, urban resilience, climate change adaptation, technology, recovery and reconstruction, and public space. He has established and implemented development projects and programs together with cities and partners in Europe, Africa, Latin America, the Caribbean, the Middle East and Asia.

Earlier, he was a founding partner of the architecture and planning firm Zandbelt&vandenBerg, where he led a broad portfolio of urban planning and strategy, and he also served as head of the Amsterdam Academy of Architecture’s Master of Urbanism program.

Van den Berg holds an Executive Master’s Degree in International Negotiation and Policymaking from the Graduate Institute of International and Development Studies and a Master of Science in Architecture from Delft University of Technology.

Van den Berg lives in Rotterdam with his wife, two sons and daughter.