This post is part of WRI's blog series, Creating a Sustainable Food Future. The series explores strategies to sustainably feed more than 9 billion people by 2050. All pieces are based on research being conducted for the 2013-2015 World Resources Report.

How does bioenergy contribute to a sustainable food and climate future?

A new WRI paper finds bioenergy can play a modest role using wastes and other niche fuelstocks, but recommends against dedicating land to produce bioenergy. The lesson: do not grow food or grass crops for ethanol or diesel or cut down trees for electricity.

Even modest quantities of bioenergy would greatly increase the global competition for land. People already use roughly three-quarters of the world’s vegetated land for crops, livestock grazing and wood harvests. The remaining land protects clean water, supports biodiversity and stores carbon in trees, shrubs and soils—a benefit increasingly important for tackling climate change. The competition for land is growing, even without more bioenergy, to meet likely demands for at least 70 percent more food, forage and wood.

Opportunities do exist to grow more food on the same land and to reinvigorate some degraded, highly underutilized land. But meeting food and timber needs without clearing more forests will already require full use of this potential. Providing just 10 percent of global transportation fuel from biofuels in 2050 would require roughly 30 percent of the total energy in all the crops people harvest today. 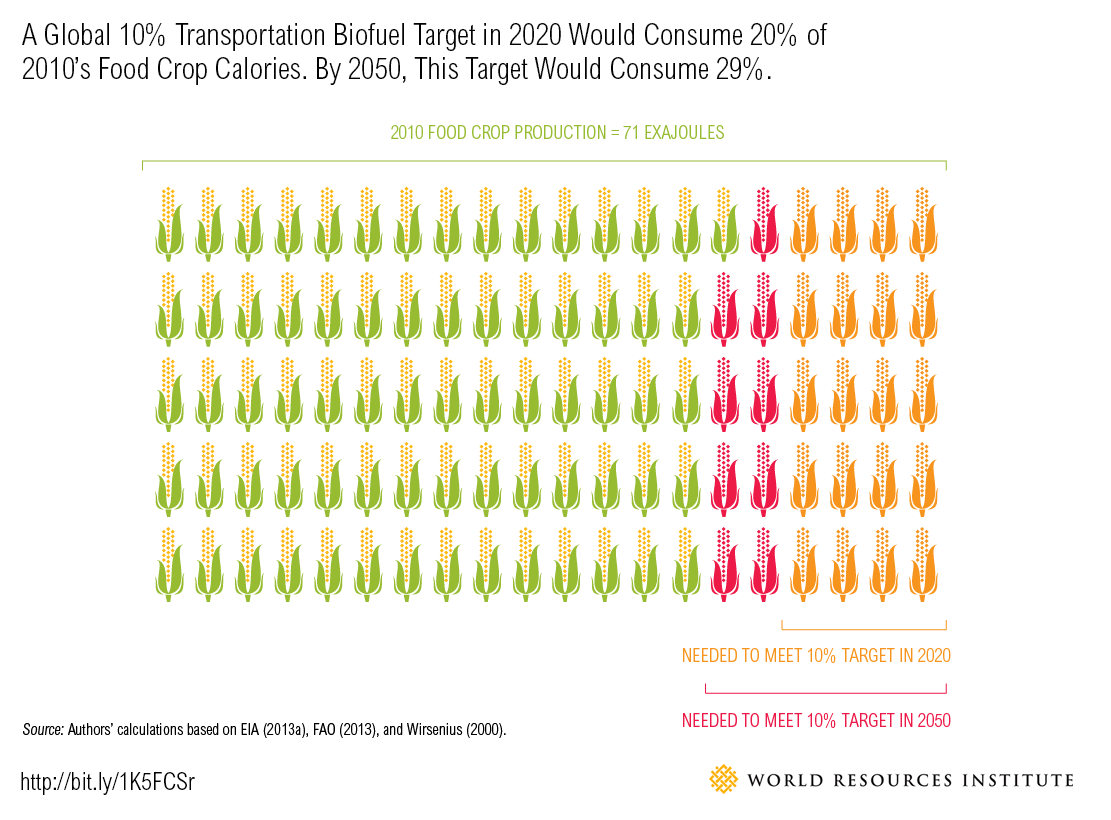 Turning to so-called cellulosic energy crops such as fast-growing grasses would not avoid this land use competition. On cropland, even with optimistic estimates, such energy crops will struggle to produce even the same amount of ethanol per acre (hectare) as corn ethanol does today. Growing these crops on pasture or forest land would sacrifice food and carbon storage benefits.

Some institutions have called for producing 20 percent of human energy needs from bioenergy of all sorts by 2050. That would require an amount of biomass equal to all the plants harvested annually across the entire world today: all the crops, crop residues, wood and grasses eaten by livestock. The world does not have the room. 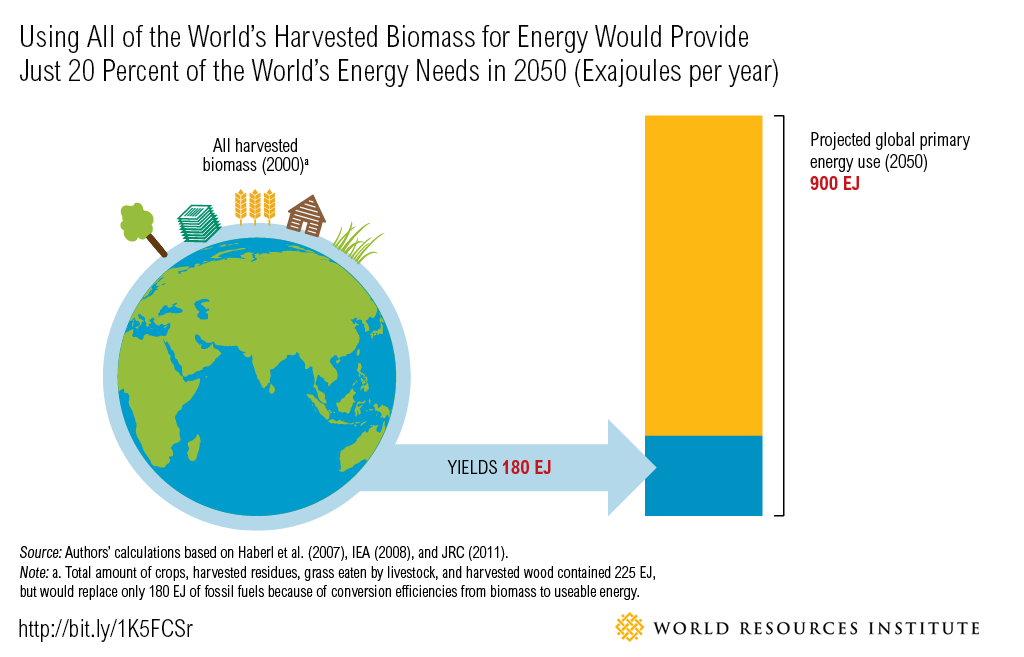 Beneath these global figures is an even simpler truth: every time we dedicate land to bioenergy, we sacrifice the opportunity to use that land for some other human need, ranging from food to carbon storage. The trade-off is a bad one because bioenergy is an inefficient use of land. Even ethanol from sugarcane in Brazil only converts around 0.2 percent of the energy in the sun’s rays to usable energy, and cellulosic ethanol would optimistically only be a little better.

This opportunity cost of land also explains why bioenergy will rarely reduce greenhouse gas emissions. Studies that find bioenergy reduces greenhouse gases incorrectly view plants as a carbon-free fuel and ignore the very real carbon emitted by burning them. The theory has been that the original growth of the plants absorbs enough carbon to offset the carbon released when they burn. But if those plants were going to grow and absorb carbon anyway – and typically they would – then diverting them to bioenergy does not remove any additional carbon from the atmosphere. Instead, bioenergy comes at the expense of some other uses of those plants. When the expense is food or agricultural land, the effect is poorer nutrition. When the expense is forests or woody savannas, the effect is less stored carbon.

Some alternative sources of bioenergy still exist without dedicating land for bioenergy. Municipal waste and some forest and crop residues provide potential. But because of limited quantities of such potential biomass, ambitions need to remain modest. Replacing traditional but inefficient use of fuel wood or charcoal with improved bioenergy would also be a net gain.

The good news is that standard solar cells available today can generate more than 100 times as much usable energy per acre (hectare) as bioenergy even using optimistic projections for bioenergy’s future. When used with electric engines in cars with more efficient batteries, solar benefits can rise to 200 or 300 times the efficiency biofuels. And unlike bioenergy, solar energy works great in deserts and on rooftops without competing for fertile land.

Solar energy will need a variety of improved storage techniques to realize its full attention to meet human energy needs, and there are unlikely ever to be electric airplanes. But the world can boost solar production enormously even with today’s technology, and promising storage technologies are emerging for the future.

The ultimate challenge is that land, particularly fertile land, is a finite resource that becomes ever more valuable as the world becomes more crowded. Using solar technologies to produce more of our energy and cropland to produce our food is the wiser, more efficient and food-secure path to a sustainable food and climate future.

Learn more about the Creating a Sustainable Food Future series.