White House Abandoning Paris Agreement Harms the U.S. As Other Countries Step Up

President Donald Trump's announcement that the United States will withdraw from the historic Paris Agreement puts the U.S. in an odd club of only two other countries – Nicaragua and Syria – which have not signed the global accord. Given the leading role the United States played in forging the agreement, the Trump administration has chosen to isolate the U.S. from the global community for years to come. 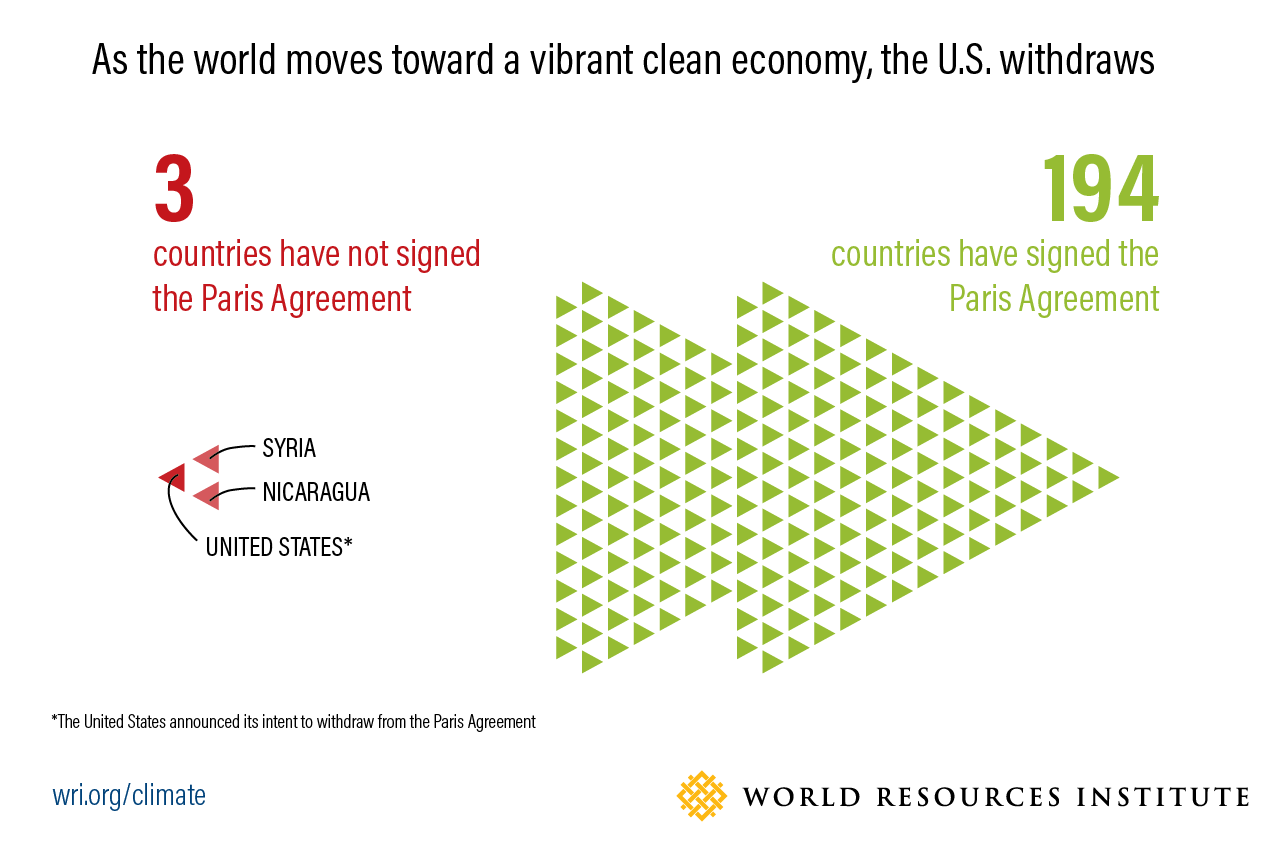 As the U.S. departs, leaders of the EU, China, India and other countries have signaled that they intend to stick with the landmark climate change pact and stand by their strong commitments to curb greenhouse gas emission to adapt to a warming world. Heads of state from France, Germany, Italy, Norway, Mexico, China and more all made statements denouncing Trump's decision and affirming their intention to push forward. We can anticipate that this global commitment will be on display at the EU-China summit today and at the G20 Summit in Germany in July.

The country that will be hurt the most by this decision is the United States. This move will make it tougher for the Trump administration to execute its international priorities and undermine its global standing. It will be harder for U.S. businesses to compete in the booming clean energy marketplace that the Paris Agreement accelerated.

The Paris Agreement is one of the most important diplomatic achievements of the last decade. It brought together nearly 200 countries around an agenda of economic transformation that would have seemed impossible just a few years ago. Turning away from this agreement means the U.S. has now turned its back on global cooperation across the board.

The global importance of climate change, and the adverse international reaction to Trump's decision, was previewed last week when the G7 communiqué noted that all parties reaffirmed their "strong commitment to swiftly implement the Paris Agreement" except for the United States, which was "not in a position to join the consensus on these topics."

This kind of language is virtually unprecedented in this kind of document. For 10 years, the entire G7 or G8 has agreed on the central importance of addressing climate change. By highlighting this disagreement, the G7 statement confirmed that climate change is now an issue of international importance on a par with trade, security and economic stability. An issue of lesser importance would not have been called out in this manner. The G7 leaders clearly felt the need to communicate to their own people and the world that they stood apart from Trump on this critical issue.

German Chancellor Angela Merkel spoke publicly about the rift that has emerged between the United States and Europe, threatening the post-World War II coalition that has brought security and prosperity. Merkel called her climate discussions with Trump "difficult" and "very dissatisfying."

Trump's decision will damage U.S. integrity at the negotiating table and impede the ability of this White House to effectively pursue other international issues that require multilateral support. Nicholas Burns, under secretary of State in the George W. Bush administration, put it bluntly: "I can't think of anything more destructive to our credibility" than leaving the Paris Agreement. It will also make it difficult for other leaders to justify to their citizens sitting down with this White House to negotiate anything the U.S. wants, given the broad and deep recognition of the need for cooperative action on climate change among other major powers.

Among the dubious statements President Trump made at his press conference was that he would look to "renegotiate" the agreement. Aside from the problem of understanding what exactly could be renegotiated in an agreement that took five years and required the consensus of over 190 parties, the idea should be taken for the red herring it is. Why would any world leader be willing to enter a negotiation on this issue after Trump just spurned the rest of the world and demonstrated a fundamental misunderstanding of what the agreement does? Further, at every opportunity in his presidency so far, he has undermined climate action. There is little reason to believe that any kind of renegotiation would change this disposition.

In justifying his decision, Trump argued that the Paris Agreement is a raw deal for the United States, and that acting on the U.S. commitment under the agreement would severely hurt the American economy. There is no credibility to this claim. Trump cited in his announcement a seriously flawed study stipulating that complying with the agreement would cost the economy at least $2.5 trillion over 10 years. This study is based on inaccurate assumptions, putting it at odds with other credible economic analysis.

The fact is that U.S. renewable energy and efficiency is booming, with some 3 million jobs created in these industries, far outstripping jobs in fossil energy. The solar and wind industries are creating jobs 12 times faster than the rest of the U.S. economy. The price of energy from renewables has plummeted, making it more affordable to home owners and businesses.

Equally as important, rejecting the nation's climate targets will make America less competitive in the global clean energy market. The combined commitments of countries under Paris have helped contribute to a $23 trillion opportunity in climate-smart investments between now and 2030.

Pulling out of the agreement means the U.S. government will no longer be working to help U.S. businesses compete in the global renewable energy marketplace through profit-making institutions like the Overseas Private Investment Corporation. By isolating itself in this way, the Trump administration may cause collateral damage to U.S. businesses competing for contracts to help other countries meet their commitments under Paris.

It was in part for these reasons that over 1,000 companies urged the president not to leave the Paris Agreement. Many of those companies' leaders, including Jeff Immelt of GE, Tim Cook of Apple, Lloyd Blankfein of Goldman Sachs and Bill Ford of the Ford Motor Company all questioned the president's decision. In addition, Bob Iger of Disney and Elon Musk of Tesla left the president's Advisory Council following the announcement.

Fortunately, U.S. states, cities and businesses are already moving forward despite Trump's threat to roll back U.S. federal action on climate change. These efforts must now be accelerated and expanded, holding a place for that day when the United States once again positions itself as a cooperative and trustworthy partner on this critical issue.

Trump is securing his place in history as someone intent on sabotaging a global effort that has earned the commitment from nearly every other country. America will be made smaller by a leader who has chosen to overlook the consequences of his decisions. 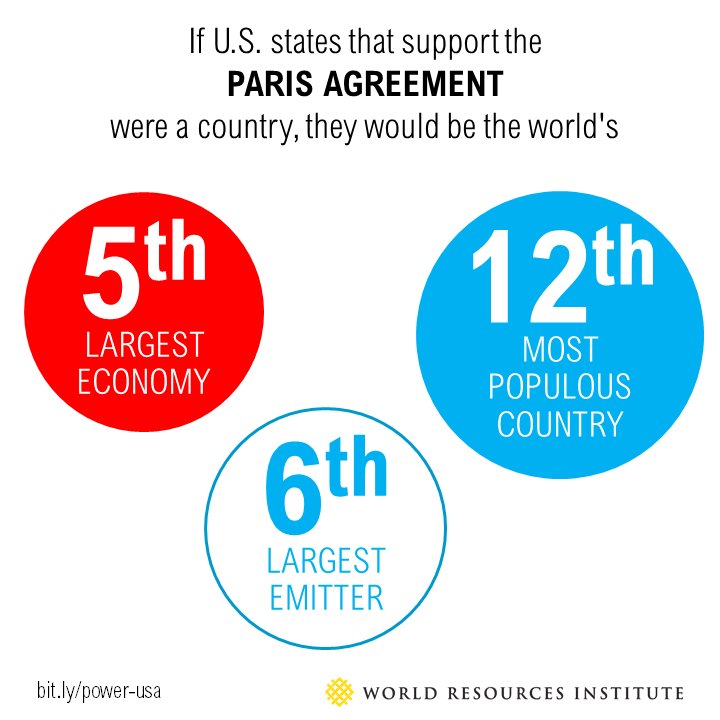 Trump's Suggestion to Renegotiate Paris Is a Red Herring

G20 Economies Must Lead on Climate Despite U.S. Position on Paris Agreement

America Can’t Afford to Be a Climate Loner