As governments prepare to resume climate negotiations in Lima in December, a key issue is the commitments countries are making to reduce their greenhouse gas emissions after 2020. A new report from the United Nations Environment Programme (UNEP) quantifies the magnitude for those commitments that will be needed in order to have a likely chance of limiting global warming to 2 degrees C (3.6 degrees F) relative to the pre-Industrial era and thereby avoiding the most extreme effects of climate change.

First, the big picture: according to the U.N. Intergovernmental Panel on Climate Change (IPCC), to have a chance to limit warming to 2 degrees C at the least possible cost, global emissions of all greenhouse gases (GHG) must reach net zero between 2080 and 2100. (Global carbon dioxide emissions must reach net zero earlier—between 2055 and 2070.) Working backwards from these figures, the estimated limit for GHG emissions is 42 gigatons of carbon dioxide equivalent (GtCO2e, used to compare different greenhouse gases in a common currency) in 2030 and 47 GtCO2e in 2025. (These levels are based on the assumption that from 2020 onwards, the global economy follows the least-cost pathway to an eventual phase-out of greenhouse gas emissions.) For context, global emissions were approximately 50 GtCO2e in 2010.

The UNEP report calculates where global GHG emissions will end up in 2025 and 2030 if countries make good on their current 2020 pledges but make no new commitments after 2020. It finds a gap of about 7 to 10 GtCO2e in 2025 and 14 to 17 GtCO2e in 2030. These are the key figures that governments need to keep in mind as they design their commitments to move off of the current, high-emission trajectory. 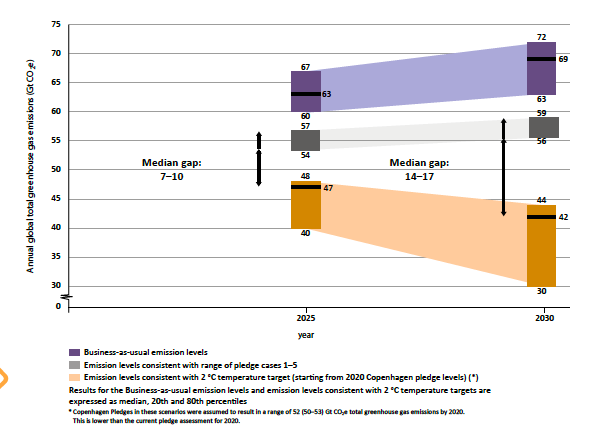 Closing the 2025 and 2030 emission gap will be easier and less costly if countries meet or exceed their 2020 pledges. This year’s UNEP report also examines progress on pre-2020 action, evaluating the gap between 2020 GHG reduction pledges and the 2010 least-cost pathway—that is, what would have been the cheapest path to reducing emissions if the world had started making ambitious reductions in 2010—and the extent to which the world’s largest economies are on track to achieve their pledges. The report finds that if all parties were to achieve their 2020 pledges, a gap of about 8 to 10 GtCO2e would remain.

The report also finds that five parties to the United Nations Framework Convention on Climate Change—Brazil, China, the EU28, India and the Russian Federation—are on track to meet their 2020 pledges. Four parties—Australia, Canada, Mexico and the United States—are likely to require further action, possibly including buying carbon offsets to meet their pledges, according to government and independent estimates of projected national emissions in 2020. The United States has outlined its intent in the Climate Action Plan. It’s important to note, however, that not all pledges are equally difficult to achieve: a country that’s on track to meet its pledge isn’t necessarily “doing more” than a country that is not yet on track.

For several key players, however, progress toward pledges has proven difficult to track. Governments have not published regular GHG inventories or updated emission projections. Moreover, the form of some of the goals themselves—framed as a deviation from business as usual—has complicated tracking, because business-as-usual trajectories are difficult to calculate, rely on varying assumptions, and may change over time. And countries that have pledged to implement individual policies—instead of economy-wide reduction goals—have not been considered in UNEP’s calculations, in part because their impact has generally not been calculated. New standards launched this week by the GHG Protocol aim to help countries address these challenges by offering standardized, robust and transparent accounting and reporting approaches for estimating emissions impacts from mitigation goals and policies and actions.

Governments will need to consider many factors as they prepare their post-2020 GHG reduction targets. The need to close the projected emissions gap in 2025 and 2030, as well as the need to set transparent and quantifiable goals, should be foremost among them.