INSIDER: Why Burning Trees for Energy Harms the Climate

Trees are renewable, so why not let them count under the proposed revisions to the EU renewable energy target? Here we answer this and other questions to demonstrate why burning trees for energy is not inherently climate-friendly.

What is the EU renewable energy target and its relevance to trees?

The European Union (EU) Renewable Energy Directive establishes an overall policy for advancing the use of energy from renewable sources in the EU. The current framework requires the EU to meet at least 20 percent of its total energy needs with renewables by 2020. Wood is currently the largest contributor to this renewable energy target, accounting for as much as 45 percent of all renewable energy consumed. Much of the forest biomass currently used consists of industrial and harvest residues and traditional fuelwood. However, these sources are nearing full exploitation and further demand for wood for bioenergy will likely come from additional tree harvesting. Even now, Europe is importing wood pellets from U.S. and Canadian forests. Proposals currently under discussion by the European Parliament for a revised Renewable Energy Directive would increase the share of renewable energy in the EU’s total energy mix from 20 percent to at least 27 percent, and possibly 30–35 percent, by 2030. This proposal would likely increase demand to turn trees into energy as EU countries seek ways to meet these more ambitious renewable energy targets.

There is a common perception that burning trees to generate heat or electricity should be considered “zero emissions” or “carbon neutral” because the carbon dioxide (CO2) released during burning is either recaptured by photosynthesis as trees regrow, or the CO2 already sequestered by trees cancels out the emissions. The reality, however, is more complex for the following reasons:

Because of the combination of these factors, it takes a long time before the CO2 absorbed by additional tree regrowth offsets the increase in CO2 emissions associated with burning wood for energy (relative to the emissions generated by burning fossil fuels to yield an equivalent amount of energy). As a result, the increase in atmospheric CO2 emissions from burning trees for energy persists for many years. This delay before atmospheric CO2 benefits are achieved is referred to as carbon payback time—”when preharvest carbon levels are reached (absolute carbon balance)”—or as time to carbon parity—”when comparing carbon levels to a reference case [such as when fossil fuels are burned and the trees remain growing] (relative C balance).” The payback time varies according to where trees are grown, type of energy generation facility, and type of fossil fuel being replaced, among other factors. In the case of mature forests, there may never be a complete payback, if the replanted forest is regularly harvested.

How long are carbon payback periods?

Several studies indicate that the carbon payback periods can be on the order of decades to more than a century, varying by forest type and the fossil fuel being compared against. Payback periods in this range are summarized by the European Joint Research Centre (2014), which draws from a half-dozen studies covering temperate and boreal forests from Europe, Canada, and the United States. Another example is Laganière et al. (2017), which analyzed carbon payback periods for various bioenergy feedstocks sourced from Canadian forests relative to coal-, oil-, and natural gas-fired power and heat generation. Figure 1 summarizes their results, with each black bar indicating the number of years that bioenergy results in increased CO2 levels in the atmosphere relative to the fossil fuel alternative. 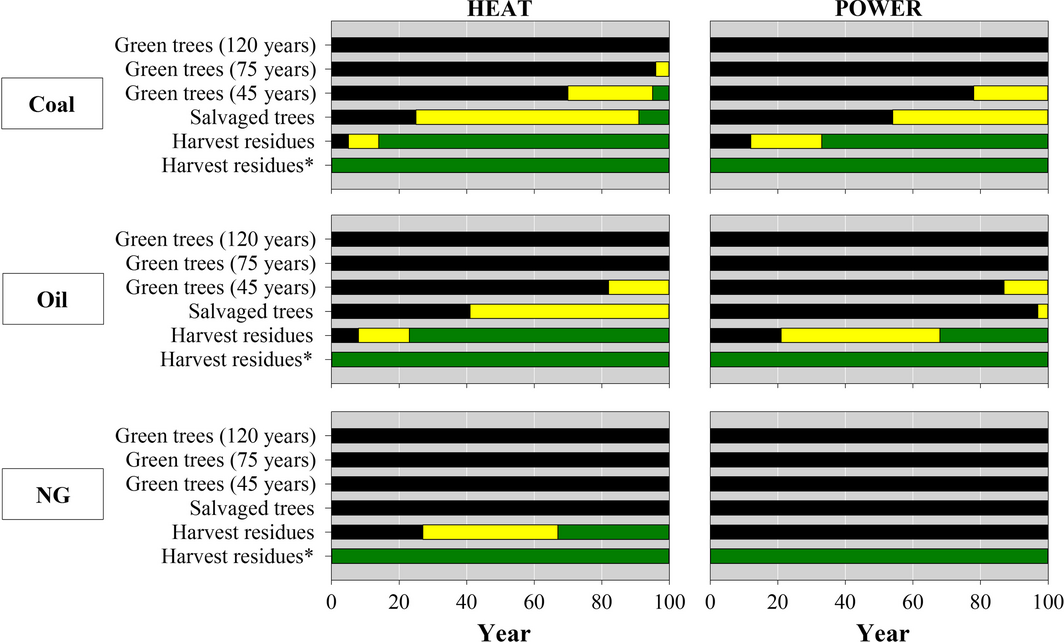 Among other studies coming to similar conclusions, Mitchell et al. (2012) analyzed an even broader set of forests and harvesting regimes and found most options to have payback times of more than 100 years, with the fastest payback times for a limited number of forest types and management regimes being at least 30 years. The science office of the Department of Energy & Climate Change in the United Kingdom had similar findings.

Why does the time delay to carbon payback matter?

Burning biomass for energy releases a big “pulse” of CO2 into the atmosphere relative to what would otherwise have been emitted if the power generator had continued to use fossil fuels. But the world needs to dramatically reduce greenhouse gas emissions over the coming three decades and peak global emissions as soon as possible, if it is to stay below a 2°C temperature rise relative to pre-industrial levels, let alone below a 1.5°C rise. There is a significant environmental cost to delaying greenhouse gas emission reductions, as recognized by the fifth assessment report of the Intergovernmental Panel on Climate Change. Now is not the time to increase atmospheric CO2 concentrations over decadal or century timescales.

But won’t trees that are already growing elsewhere re-absorb the CO2 released from harvesting and burning trees, “offsetting” the emissions?

No. Those trees growing elsewhere would have grown anyway in the counterfactual situation where fossil energy was burned instead of wood. Thus, their absorption of CO2 is not “additional” and cannot be counted as an offset for absorbing the CO2 released by burning trees for energy.

But haven’t trees used for bioenergy already absorbed CO2, so their emissions are not “new”?

Are there any tree-based feedstocks that could be beneficial from an atmospheric CO2 perspective?

Some sources of bioenergy have shorter carbon payback periods. These include various forms of tree-based residues and wastes, including forest slash left over after harvest, black liquor from paper making, unused sawdust, and urban wood waste.

Have others arrived at similar conclusions?

Yes. A U.S. Environmental Protection Agency Science Advisory Board concluded in 2012 that bioenergy is not inherently “carbon neutral” in the near term. Support for this conclusion was expressed in a letter from more than 90 leading U.S. scientists. A European Environment Agency Scientific Committee came to a similar conclusion when giving advice on greenhouse gas accounting in relation to bioenergy. A number of other papers have found that burning stem wood increases CO2 emissions for at least decades, including the following:

What should the EU do with the revised Renewable Energy Directive?

First, the EU should pass an amendment to the Renewable Energy Directive to limit the definition of renewable biomass from forests to residues and wastes. The current sustainability criteria for bioenergy proposed by the European Commission do not ensure that use of bioenergy results in CO2 reduction benefits over fossil fuel alternatives in climate-relevant timescales. Second, the EU should phase out subsidies and incentives for the use of stemwood and stumps. Tree-based wastes and residues should benefit from subsidies or incentives only if they have no major alternative uses. In practice, the quantity of biomass that results in CO2 benefits for the atmosphere is likely to be limited relative to the total demand for renewable energy.

The enhanced EU renewable energy target should instead be met by increased investments in wind, solar, and other zero-emitting energy sources with unambiguous climate benefits. And efforts to increase energy efficiency should be strengthened.

If the EU does not restrict biomass to genuinely CO2-friendly feedstocks, other countries will likely adopt similarly lax regulations that allow trees to be used as renewable energy sources—with significant negative consequences for forests and climate.

Hungary: Converting the Mátra Power Plant into a Diversified Hub of Green Energy and Industry

How to Protect Forest Carbon in a Fire-prone Future