How and Where to Plant 60 Billion Trees in the US

The Trillion Trees Initiative has garnered support from business and political leaders around the world. U.S. President Trump highlighted the initiative as the cornerstone of his plan to protect the environment, a rare shift for an administration that has moved to withdraw from the Paris Agreement on climate change and dismantle domestic environmental regulations. Lawmakers from both parties have also proposed legislation to accelerate tree planting campaigns, including the "Trillion Trees Act" recently introduced by Rep. Bruce Westerman of Arkansas (which envisions increasing planting in the United States by 24 billion trees over 30 years).

If done well, planting trees can help address the climate crisis by removing carbon from the atmosphere (though it's no substitute for reducing greenhouse gas emissions) while providing benefits for communities and the environment. But how and where can the United States plant billions of new trees? The country can't realistically return productive agricultural lands to forest, not when we need to feed a global population expected to reach 10 billion by 2050. Nor can we expect trees to grow on landscapes that aren't ecologically suitable — think deserts or the Great Plains — without vast influxes of water and fertilizer, which would carry their own environmental consequences.

New analysis from WRI shows that even within these limits, the United States has ample room to restore trees to the landscape beyond current rates of replanting — up to 60 billion new trees by 2040 if we use all suitable land across the country without reducing food production. Those trees could remove up to 540 million tons of carbon dioxide per year from the atmosphere, equal to nearly 10% of the country's annual net greenhouse gas emissions, or all annual emissions from U.S. agriculture. 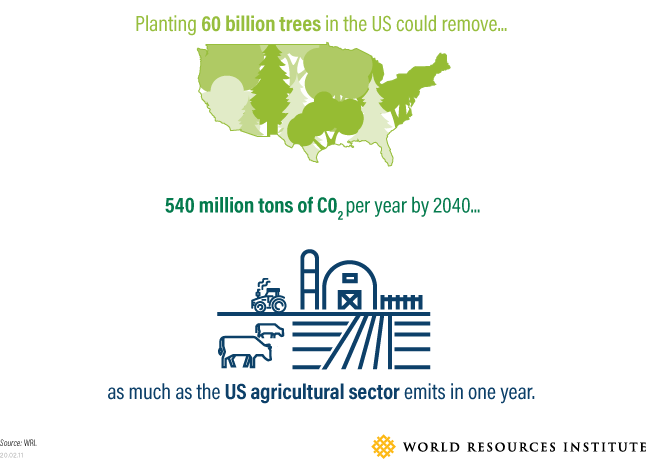 Where Do We Plant 60 Billion New Trees?

Here are five ways the United States can restore trees to the landscape:

Reforestation involves planting trees on historically forested lands that no longer support forest cover — including lands disturbed by wildfire or disease, as well as open spaces in the suburbs and rural areas. Many of these landscapes may not regenerate forests naturally, or may take many years to do so, and so require human intervention.

2. Eastern Forests Can Be Restocked with 24 Billion Trees

Half of all U.S. forests used for timber are considered "understocked" by the Forest Service. Restocking forests, for example by replanting after timber harvests or controlling competition from invasive species, can store more carbon in existing forests — especially in the eastern United States, where wildfires pose a smaller risk.

Not all cropland is suitable for agroforestry, but in certain areas planting trees between rows of crops, around the edges of fields or along streams can provide a host of environmental and economic benefits to farmers while removing carbon from the atmosphere.

The total number of trees cities can plant is small relative to opportunities in other places. But expanding tree cover in urban areas can also clean the air and provide a healthier quality of life for residents, while benefiting the climate by cooling urban "heat islands" and reducing energy demand for air conditioning in homes and businesses. 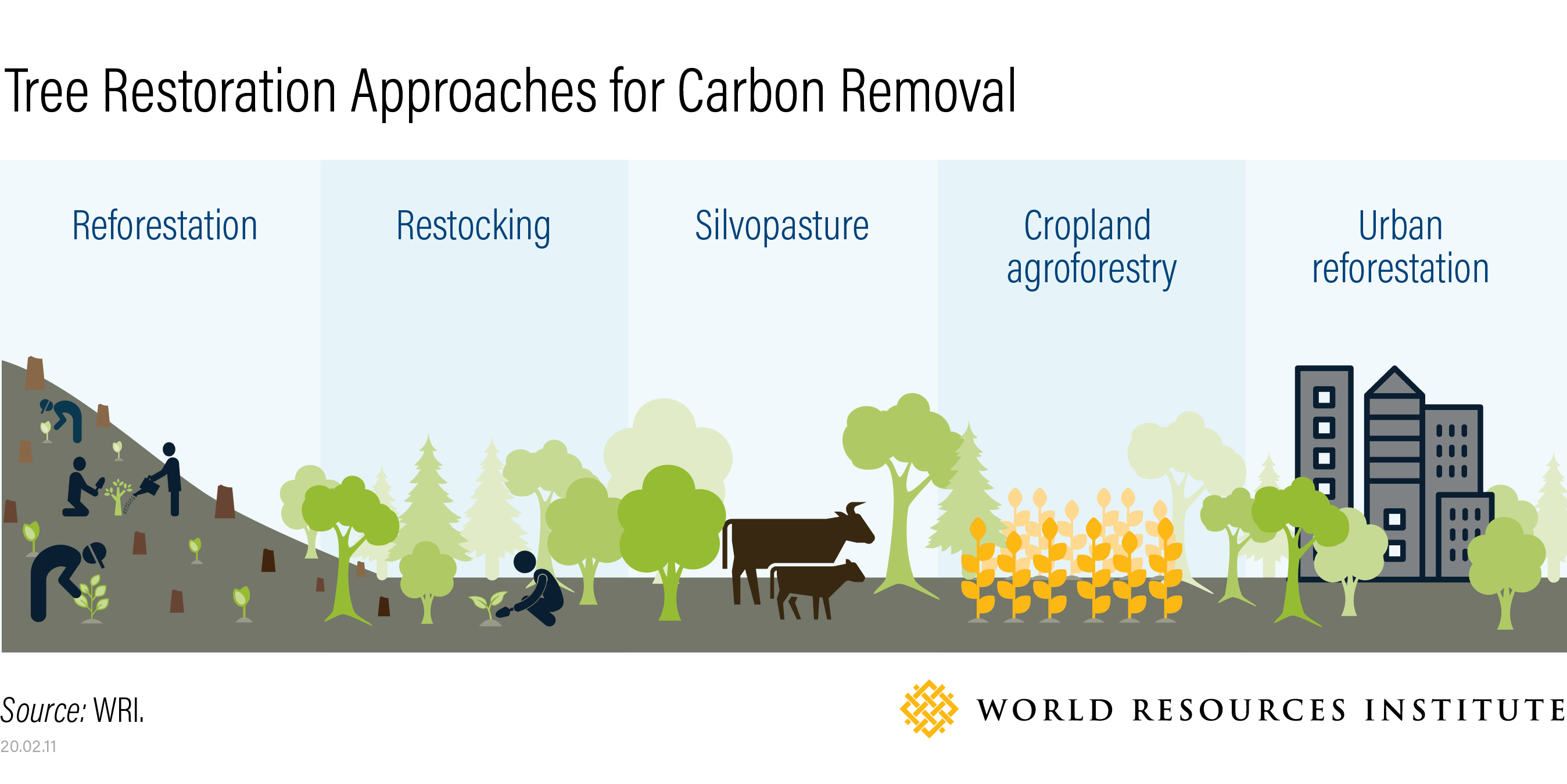 How Do We Fund Tree Planting Efforts?

The United States may not be able to plant 60 billion trees overnight, but it can start now. With a public investment of $4-4.5 billion per year — comparable to what the federal government currently spends on fossil fuel subsidies, but nearly 100 times more than what the Trillion Trees Act would provide — the country could complete this tree restoration campaign within 20 years. That investment would help private landowners shoulder the upfront costs of tree planting, which range from $50 to over $500 per acre.

No matter how many billions of trees we plant, tree restoration is not a silver-bullet strategy to fight climate change. Scientists have shown that achieving the Paris Agreement goals and limiting the worst climate impacts means reaching net-zero greenhouse gas emissions around 2050. If the majority of the potential 60 billion trees are restored and grow to maturity, they could remove 7 billion tons of carbon dioxide cumulatively through 2050. But still more carbon removal will be needed from other natural and technological solutions to keep the United States on track: tree restoration would only provide a quarter or less of the approximately 2 billion tons of carbon dioxide the country needs to remove each year by 2050. Moreover, while removing excess carbon dioxide from the atmosphere is necessary, no carbon removal solution can substitute for reducing greenhouse gas emissions as quickly as possible. 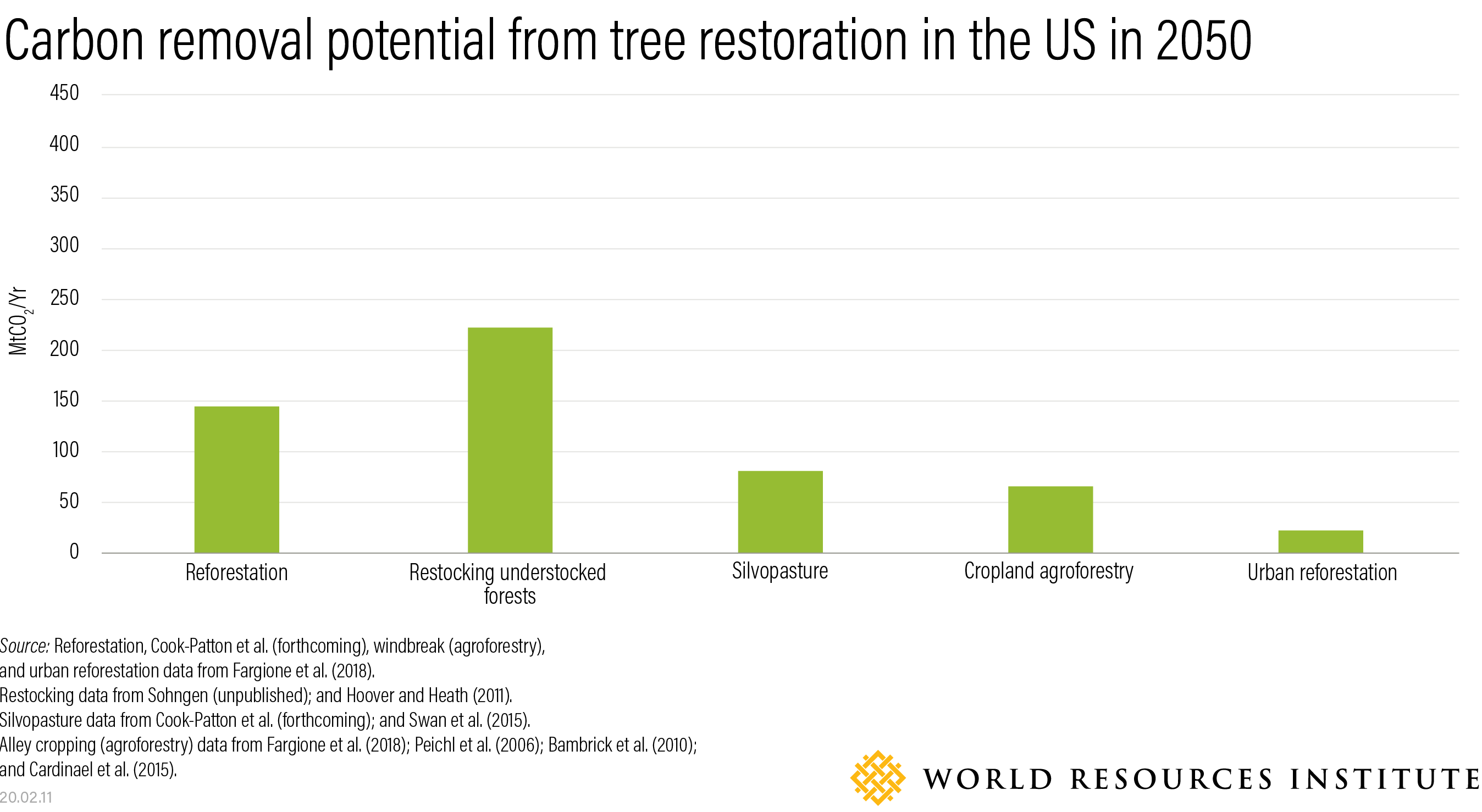 But as part of an "all-of-the-above" strategy that includes both emissions reductions and carbon removal, tree restoration can provide meaningful benefits — and those benefits go far beyond carbon. Trees in the United States already provide $6.8 billion in health benefits every year by filtering pollution from the air, on top of additional benefits from cleaner water, wildlife habitat and forest industries. Restoring trees to the landscape is truly a win-win for the climate and communities — but we need to start planting now for new trees to reach their full carbon-removal potential by mid-century. To do that, the United States needs more than just talk of a trillion trees; it needs to invest billions of dollars in this climate opportunity.

Editor's note: A previous version of this blog post stated that urban reforestation can account for 400,000 new trees in the United States. The correct number is 400 million. We regret the error.