The year 2006 was rough on the American Southwest. The region experienced some of the most extreme drought on record, threatening the drinking water supply, affecting local ecosystems and increasing the risk of wildfires.

So Bill Richardson, then governor of New Mexico, took an innovative approach to dealing with natural resource management in a changing climate. He declared 2007 the “Year of Water,” introducing a legislative agenda for new water infrastructure, new governing bodies for natural resources and a river restoration program. The River Ecosystem Restoration Initiative aimed to increase vegetative cover along major rivers in New Mexico, restoring nearly 1,000 hectares (2,400 acres) of riverbanks, leading to tremendous benefits for people and the environment. 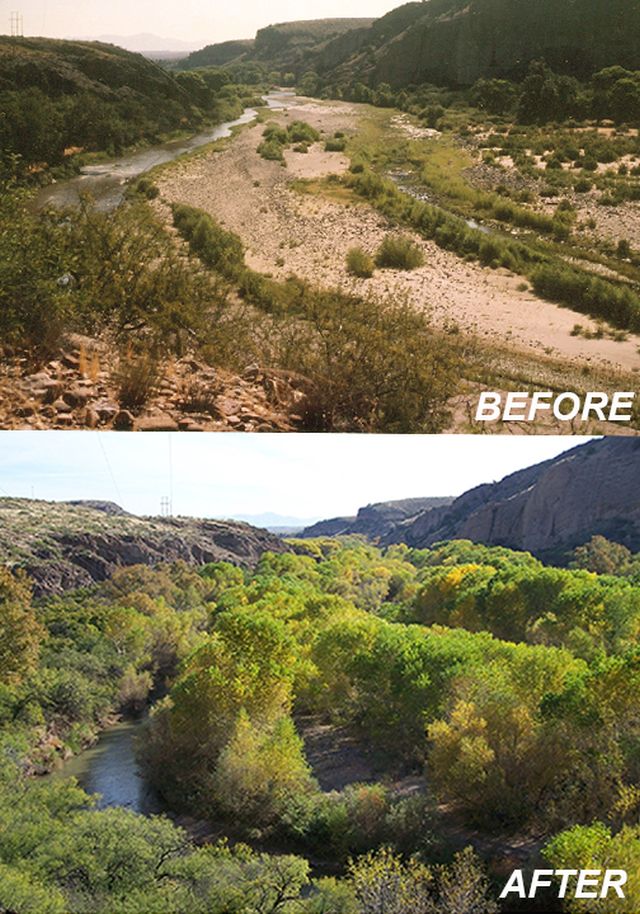 Restoration along the banks of the Gila River in New Mexico. Photo by New Mexico Environment Department.

Perhaps it’s no surprise, then, that Governor Richardson recently took the opportunity to share the benefits of restoration with other governors throughout the world. He addressed a group of 12 climate-savvy governors at the annual meeting of the Governors’ Forest and Climate (GCF) Task Force’s, a collaboration between 29 states and provinces in Brazil, Indonesia, Mexico, Nigeria, Peru, Spain and the United States. Since its inception in 2008, the group has been focused on engaging multiple levels of government in low-emissions rural development and REDD+, and Richardson asked them to expand their purview to include forest and landscape restoration.

Indeed, while restoration tends to be discussed at the international or national levels, examples show that it is implemented at the state and local levels—with many benefits for communities.

Subnational programs on restoration, like Richardson’s River Ecosystem Restoration Initiative, can be found across the globe, including in some of the states and provinces represented by members of the GCF Task Force.

Governor Simão Jatene of Pará, Brazil – a founding member state of the GCF Task Force – sees Pará’s recently created land registration program as the first step in halting deforestation and restoring illegally cleared land. The program has been successful in decreasing overall forest clearing by requiring large landowners to register their land with the government, and is now targeting smallholders who have accounted for an increasing proportion of deforestation in recent years. The program will increase knowledge on land uses and help to identify new restoration opportunities in the state.

In Tigray, Ethiopia, Regional President Ato Abay Woldu has been a staunch advocate for restoration. He was a driving force behind the re-greening of 1 million hectares (2.5 million acres) of degraded land during his time as the director of Tigray’s Bureau of Agriculture and Natural Resources. With the support of local government, farmers were able to protect and manage naturally regenerating trees and bushes on their farms to improve soil quality, reduce erosion, increase crop yields and significantly raise household income across the region, resulting in a 30 percent decrease in the number of people below the national poverty line.

A Governors’ Club on Restoration

Richardson’s support for restoration caused a noticeable buzz among the governors at the GCF meeting, with representatives from states in Brazil, Mexico and Nigeria expressing initial interest. Donors have been equally impressed by the work of the GCF Task Force, with the Norwegian Agency for Development Cooperation pledging $25 million (200 million NOK) over the next four years to support the Governors’ Climate & Forests Fund, the climate finance facility of the GCF Task Force.

As momentum builds towards the climate negotiations in Paris, national governments are being asked to consider how their countries will contribute to a low-carbon, climate resilient future. With support from international efforts like the Bonn Challenge and the New York Declaration on Forests, many countries are committing to restore degraded land and forests to offset emissions as they improve household income and food security. But while these international frameworks and national commitments are important, it is often the states, provinces and districts that must go beyond commitment to take action. Subnational leaders will be creating, shaping and implementing land use policies that improve agricultural productivity and restore degraded lands to help the world feed 9.6 billion people by 2050.

It’s time for officials from all levels of governance—from the local to the international—to harness the value of restoration. Only through this collaboration can we truly create a “Restoration Generation,” the first generation since the Industrial Revolution to leave the planet’s ecosystems healthier and more functional than they found them.

Ethiopia Commits to Restore One-Sixth of its Land

PODCAST: The Business Case for Planting Native Trees in Brazil

Bonn Challenge On Track to Meet Land Restoration Goal by 2020