Drought Is Only One Explanation for California’s Water Crisis

As California continues to battle its water crisis, the situation is drawing remarkable attention from media, local officials, and even the federal government. While the ongoing historic drought has made the state’s supply shortages more visible and severe, the roots of California’s water woes are multi-faceted. A confluence of environmental, infrastructure, social, and political factors make California’s water system one of the most complex in the world. As lawmakers and other decision-makers move forward with potential solutions to the state’s current water shortage, it’s important to consider the full context of underlying reasons for California’s water vulnerability.

Naturally available supplies like lakes, rivers, streams, and groundwater are not plentiful enough to satisfy California’s current water demands. WRI’s Aqueduct Water Risk Atlas illustrates competition between companies, farms, and residents for limited amounts of naturally available, renewable surface water. Our research shows that about 66 percent of the state’s irrigated agriculture—its biggest water user—faces extremely high levels of baseline water stress. This means that more than 80 percent of the available water supply is already being used by farms, homes, businesses, and energy producers. It’s clear that even without drought, the state would be in trouble.

The state has compensated for its lack of naturally available water by engineering a more stable supply. California has been called the “most hydrologically altered landmass on earth.” A complicated web of dams, aqueducts, and pipelines moves water across the state, drawing from 157 million acres of land spanning eight states. More than 400 local, state, and federal agencies manage water for the state’s food, energy, and municipalities, with each drawing from different sources. Farmers, in particular, have also tapped groundwater to compensate for surface water deficits.

Given these circumstances, California is particularly vulnerable to any change in available water supply. Dry conditions have a ripple effect statewide, across the elaborate and interconnected water supply system. The state, therefore, suffers dramatically when it enters dry periods like the one it’s currently facing. 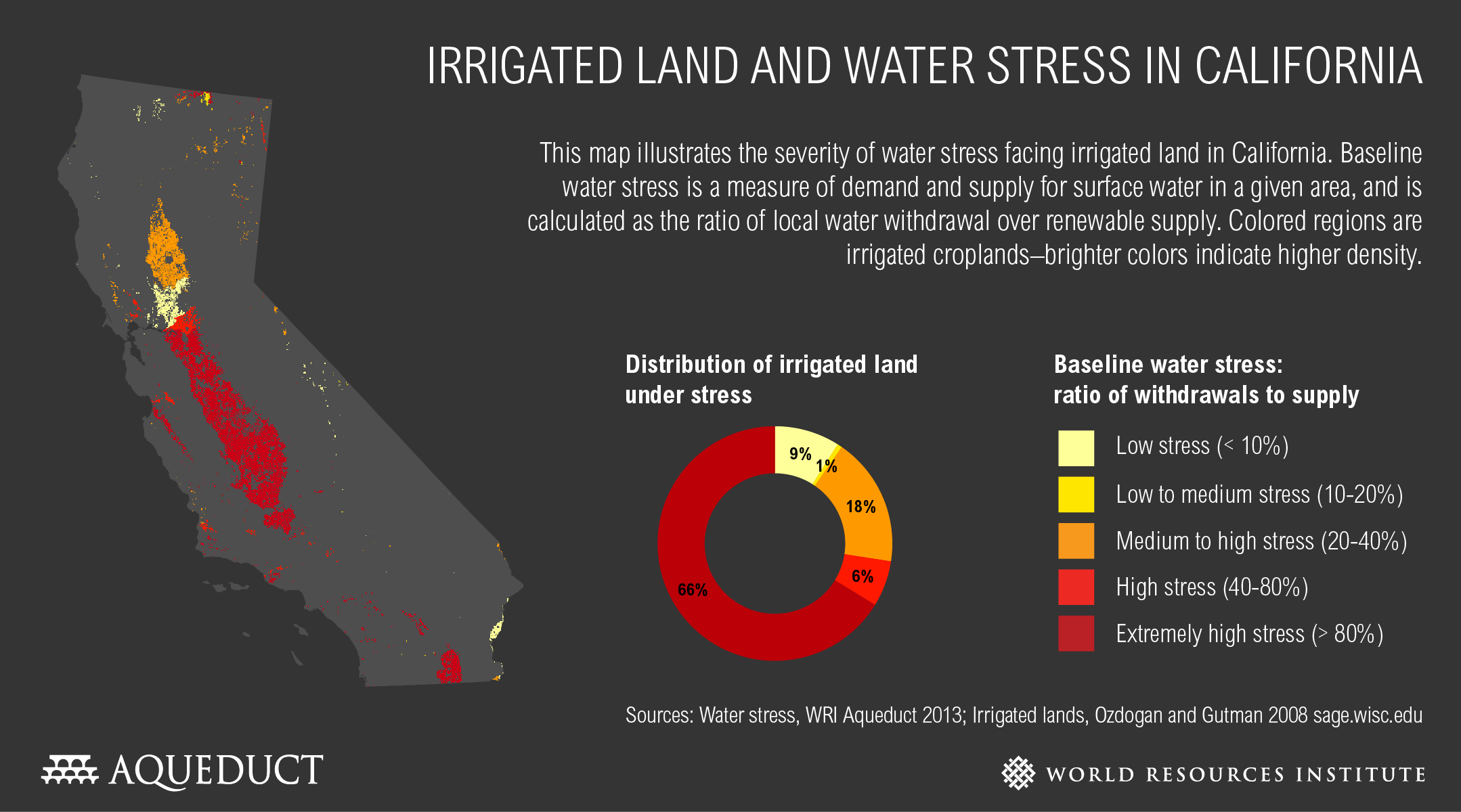 Pushing the Limits of a Complex System

Dry periods cause California’s already-limited local water supplies to drop even lower. For example, snowpack in the Sierra Nevada, a critical water reserve for the state, is currently 77 percent below normal levels.

Additionally, California is only one of seven states—as well as Mexico—that depend on the Colorado River Basin for water supplies. While the Colorado River is not immediately affected by the drought plaguing California, it faces serious stresses of its own. Those include chronic drought, the ongoing threat of climate change, and ever-increasing demand. Last year, for the first time, the Federal Bureau of Reclamation cut water releases from Lake Powell on the Arizona-Utah border to Lake Mead, America’s largest reservoir behind Hoover Dam.

There are also socio-political factors at play. The Colorado River basin is managed through a complex collection of compacts, treaties, legislative acts, and agreements among the parties who receive allocations from the river, including a substantial allocation to southern California. That legal structure determines how much water each of the river basin’s many “users” receives. But recent reduced snowpack in the Rockies—combined with what will likely be an even drier future—are forcing what The New York Times called a “profound reassessment” of how the Colorado can meet regional demands.

In short, California’s companies, farms, and residents are highly dependent on limited, carefully managed amounts of water—making them vulnerable to even the slightest changes in supply.

California’s current drought actually began more than two years ago—a dry stretch that’s caused the state to lose a considerable amount of its water supply. From 2011 through 2013, water stored in the state’s largest watershed—the Sacramento-San Joaquin—and in the Central Valley has dropped by 20 billion cubic meters (5.3 trillion gallons), or two-thirds the volume of Lake Mead.

However, California’s water management and allocation system is so complicated that actual impacts of the current shortage vary around the state. Some users in the north are desperate for water. Last month, state health officials identified 17 communities and water districts that could actually run dry this year. The Santa Clara Valley Water District in central California—which provides water for Silicon Valley—will only provide 80 percent of the drinking water its customers requested. Finally, the state’s Department of Water Resources announced that the State Water Project—California’s largest canal system—will not deliver any water to customers unless precipitation increases dramatically.

The impact on the state’s food production is yet to be determined. The state’s largest farmers and users are, on the whole, managing their shortages with relative success so far, Circle of Blue reporter Brett Walton said in a February briefing. Those with sufficient financial and hydrological resources can make do for now through a combination of conservation and efficiency measures, trading on water markets, and groundwater withdrawals. Groundwater, however, faces its own serious, chronic issues. Water tables are falling because withdrawals are increasing, and recharge—that is, water flowing back into the ground—is decreasing.

The state’s farmers have not planted their crops yet, so it is unclear how the Central Valley’s struggles will affect grocery bills this year. Some are already planning for the worst.

The bottom line, though, is that California is already sitting at a precipice when it comes to water resources management—and without sufficient reform, it could fall over the edge. Looking into the future, climate change will likely make precipitation more variable, unpredictable, and extreme in both directions. Projections suggest that spring snow accumulation in the Sierra Nevada and other snow-laden areas will decline 25 percent or more by 2050, said research meteorologist Daniel Cayan in a recent email. Much of that snow is expected to turn into rain, which California’s infrastructure is not built to manage.

The state is starting to take action. Gov. Jerry Brown signed a $687 million drought plan into law. The money will fund water conservation and recycling projects, as well as housing and food for workers directly affected by the current drought.

Over the long-term, however, California—and places like it around the world facing similar stresses—will need to entirely re-imagine how they manage water. Historically, people re-engineered water supply to meet demand. Looking forward, regulators, communities, industries, and agricultural operations will have to significantly re-engineer demand to meet the available supply. We're already beginning to learn how to do this—serious studies exist on how California might dramatically cut its water use while sustaining its growth, such as those led by the Pacific Institute’s Peter Gleick and others. But the work necessary to turn those plans into reality is still to come. Dealing with California’s underlying water vulnerabilities today is a key part of ensuring the state’s economic, environmental, and social stability tomorrow.