Imagine you’re a wheat farmer in Rajasthan, a state in northwestern India. Wheat needs more water than rains provide, especially during the dry season. So you drill a well.

You don’t have to pay for the water you use or the electricity that powers your pump, so you let the pump run. While you know the water comes from an aquifer somewhere beneath your feet, it's invisible, diffused throughout layers of soil and rock. Draining an aquifer is therefore very different from draining a reservoir, where you can see the water level drop.

You and your neighbors, and other farms, companies and cities around the world, keep withdrawing water from these underground sources with little regard for how much water they use and how much is left. People have an incentive – and no disincentive – to tap as much groundwater as they can. The result is a race to the bottom of the aquifer.

The results of this very local phenomenon were captured on a global scale by research released last week by NASA and the University of California, Irvine. The Gravity Recovery and Climate Experiment (GRACE) satellites showed that many of the world’s biggest aquifers are being depleted at a much faster rate than they can be replenished, from the Middle East, India, North Africa and Central Asia to California’s Central Valley.

These data and analyses are critically important, raising awareness about an underreported issue and looming crisis, and allowing governments, development organizations, companies and researchers around the world to concentrate their groundwater work on the worst-suffering areas.

However, there’s far more work to be done. That motivates WRI’s Water Team to focus on other key contextual elements: the combined effect of competition for surface water, groundwater depletion, and sharpening our comprehensive understanding of groundwater resources themselves, from current water table levels to sustainable withdrawal rates and more.

Dry Surface? Look Out Below

Both supply and demand must be a part of any discussion about dwindling water resources. All the critical regions identified by GRACE face high to extremely high water stress in surface rivers and streams. In highly water-stressed areas, 40 to 100 percent of the local water supply is withdrawn by businesses, farmers, residents and other consumers every year. WRI’s Aqueduct Water Risk Atlas maps water stress around the world. The Middle East appears in the Atlas as a quilt of dark red and grey, indicating arid and extremely high water stressed areas where users withdraw 80 percent or more of the available, annually renewable surface water every year. 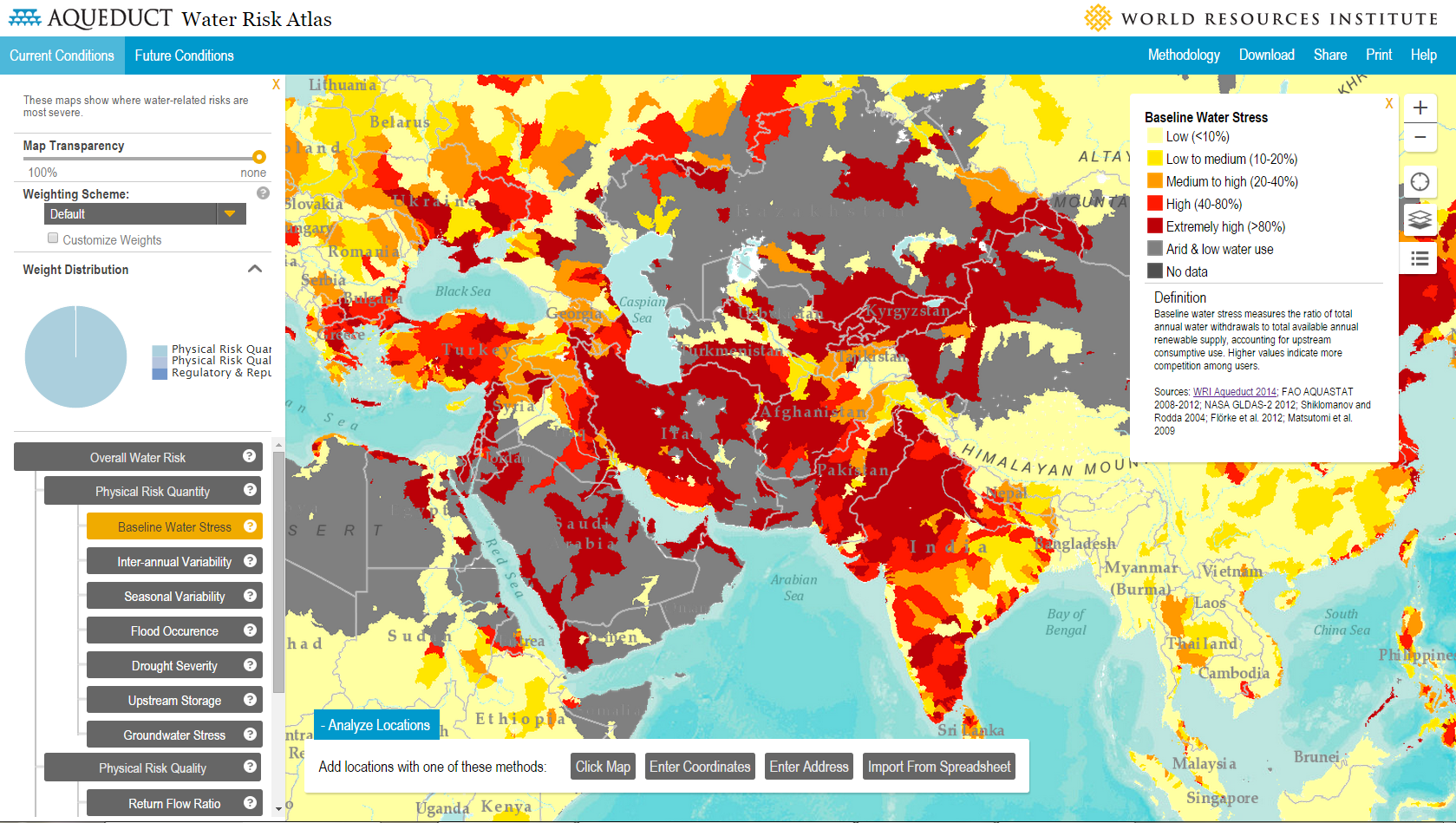 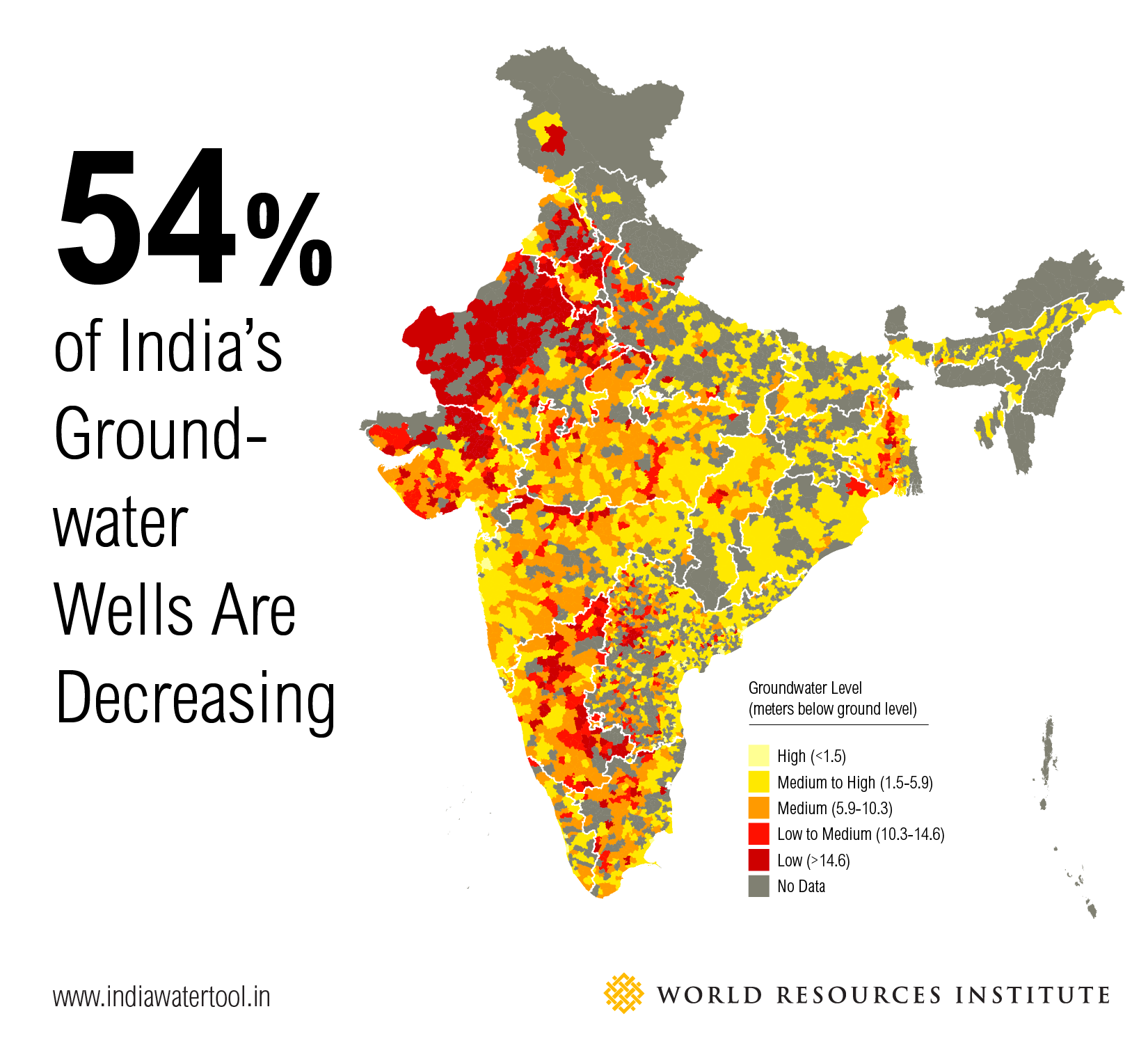 California’s Central Valley is another exceptionally productive agricultural region that raised red flags for groundwater depletion in the GRACE analysis. WRI mapped the competition for naturally occurring surface water in California over its irrigated agricultural land, and once again, surface water stress mirrors areas of high groundwater stress very closely. About 66 percent of the state’s irrigated agriculture faces extremely high levels of baseline water stress. It’s long been known that Central Valley groundwater is being pumped at unsustainable rates. In the midst of California’s current epic drought, with no natural replenishment of aquifers and over-pumping, groundwater tables are declining alarmingly. 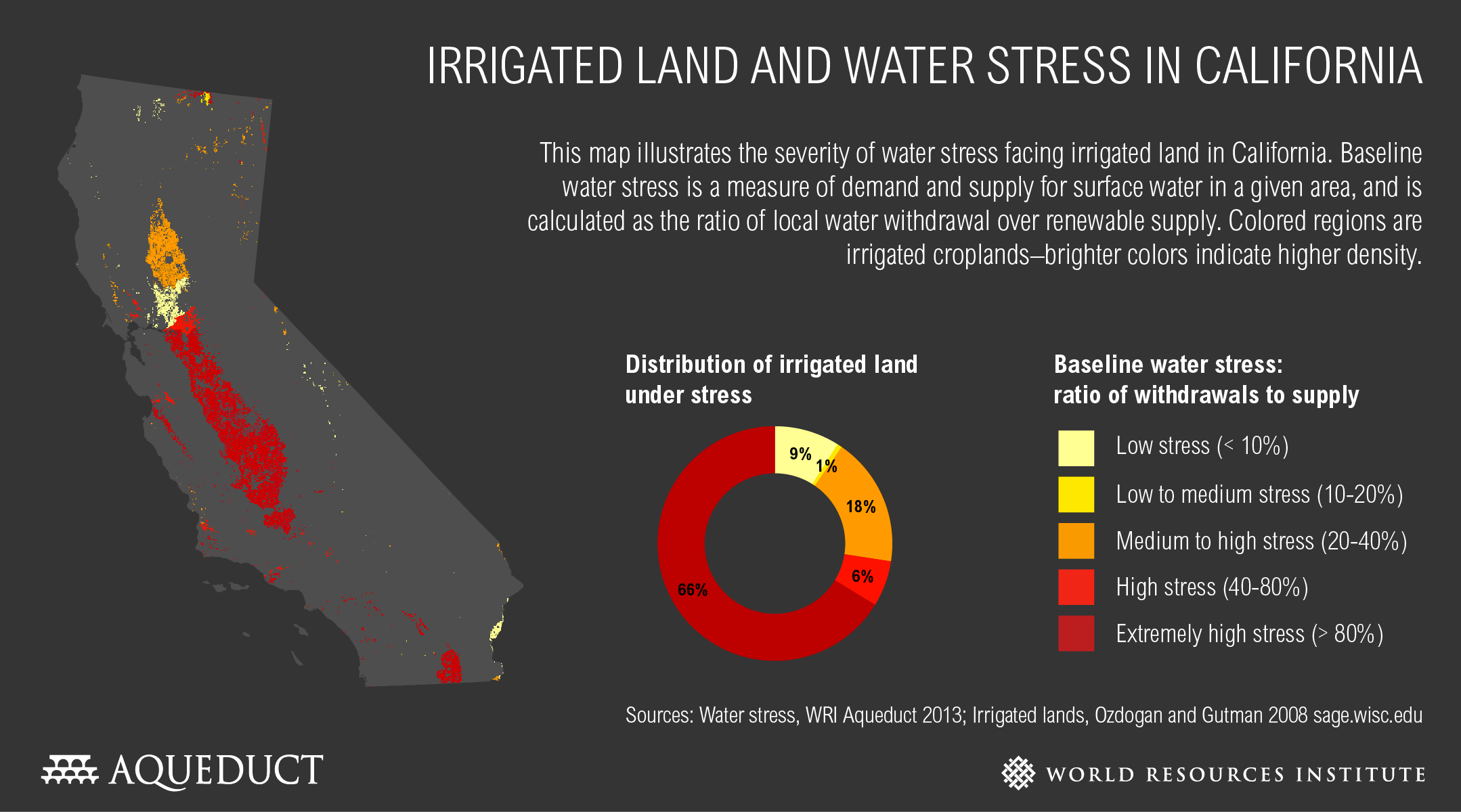 As valuable as GRACE’s groundwater data is, it has a crucial gap: it cannot show the total volume of groundwater available in the aquifers it tracks, only the rate of decline. Without knowing when the aquifers will go dry, or when water tables will sink so low that they are effectively inaccessible, users and water managers are blind to the scope and severity of their problems.

A global dataset for volumes of water stored in aquifers would be invaluable, but is still many years away. At WRI, we are planning a new global groundwater data layer for the Aqueduct Water Risk Atlas as a first step. In collaboration with Utrecht University in the Netherlands and Deltares, a Dutch water research organization, we are preparing more detailed models of groundwater. We will create a comprehensive, high-resolution groundwater risk map for groundwater levels and extraction rates around the world. We are also planning a groundwater stress map to illustrate the ratio of recharge to depletion in a given aquifer every year.

Groundwater is a valuable resource the world over. Managed sustainably, it can support food production and growing cities and businesses. But truly understanding the nature of this critical resource, how much groundwater there is, how long it may last in different places at current rates of extraction, and what sustainable recharge rates are, is essential for many countries’ future economic development.